Discussions on the economic history of the nations taking part in WW2, from the recovery after the depression until the economy at war.
21 posts

Legion Speer:
The NSKK as a German organisation was not allowed to recruit German nationals but the demand for manpower changed this in September 1942. To satisfy the growing requirements for transportation personnel within the OT, Speer, when he became Reichminister in Todt’s place, entrusted Gruppenführer Nagel with the formation of the Legion Speer. This organisation originally consisted of Russian emigrants but was soon greatly expanded by the inclusion of some 250,000 Russian prisoners of war. In Sept. 1942, the leadership of the Legion Speer was placed in the hands of NSKK-Gruppenführer Jost who then obtained the rank of Generalkapitan and the title of Kommandeur der Legion Speer. In its early inception the Legion Speer was called the transport and construction formation of the Generalbauinspektor für die Reichshauptstadt who was, in fact, Reichsminister Speer. The original plan of including Russian prisoners of war evidently never took any real form. Instead, the Legion Speer was organised along voluntary lines and was open to all persons of any nationality as well as those who did not possess any nationality at all (Staatenlose). Only the leadership of the Legion Speer remained in German hands.
The directives concerning the employment of foreigners prescribed the following areas for different nationalities: in the West, Russians, Ukrainians, Latvians, Estonians and Lithuanians; in the North, Norwegians, Swedes, Danes, Dutch Flemings; in the South-West, (Balkans), French and Walloons; in Germany, Dutch and Flemings; in the Eastern Military Zone, Bulgars, Serbs, French, Walloons, Norwegians, Swedes, Denes, Slovaks, Croats and Czechs. The above programme, however, served only as a general directive. Modifications were permissible with one exception, Russians could only be employed in the West.
Top 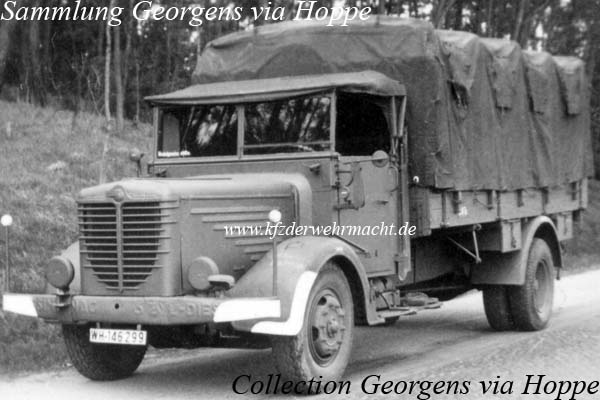 I have been looking at the overall numbers of German vehicles available both in the wider civilian economy and then across the three Services of the Wehrmacht.