Discussions on the economic history of the nations taking part in WW2, from the recovery after the depression until the economy at war.
35 posts

Unlike Stalin, China took advantage of America's good will and became prosperous.

Remember China survived thanks to Stalin. The power of China came from him.
China turned to US only very late, which can be taken as a treason from China toward SU.


The Soviet Union launched the first man into outer space, but it couldn't afford to put men on the moon.

What for ? Nothing interesting on the moon.


The Germans did launch the first batch of rockets, but not into outer space.

They did V1 V2 to bomb London. They still dont have sent anything into space.


What if Stalin had died at the end of WWII? Suppose he had been partying with Beria and Molotov late at night and ended up with alcohol poisoning, for example. Both Beria and Molotov advised being friendly with the U.S., which would have translated into more prosperity for the U.S.S.R. ...

Truman was not friendly to Stalin. With Roosevelt they could have good relations, but with Truman it was impossible : Truman didnt want peaceful relations with Stalin, he was afraid of him.


Russia could have cut China off on the path to prosperity

Well... You actually think China is more prosperous than Russia ? Since when exactly ? Because without SU support, you would have never got such a powerful China at the outbreak of the war. Without Stalin's support Mao would have been nothing during and after the war...
By the time SU launched satellite and men into the space China was mostly still a medieval state.
Today China is still poorer than Russia.
Top

China survived because the US defeated Japan. The Soviets were just the enablers of the later Maoist genocide.
Without the Soviets China would be a modern and rich country, not the generic fascist state it is today (Mussolini would gladly approve the state capitalism in today's China).

It was actually the Germans who prepared and armed the Chinese, and allowed them to die with honor at Shanghai. 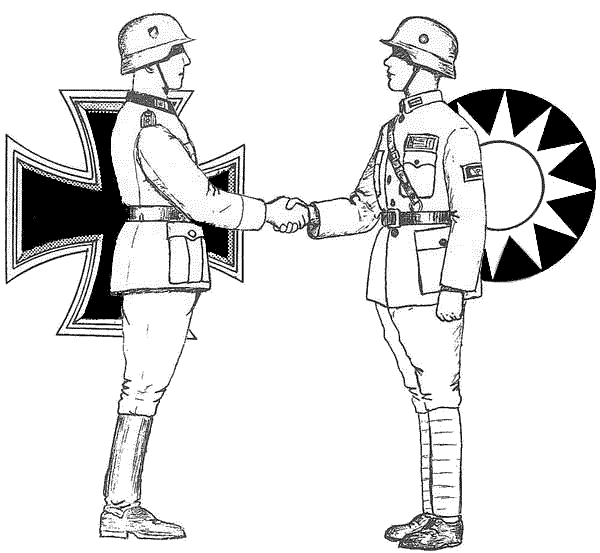 Did you forget to add the pro rata share and the comprehensive Congressional appropriation for the Pension Benefit Guarantee Corporation ? and Freddy Mac and Fanny May and the non-FICA Social Security programs and running out of cyber - space ..........

One of my first introductions to politics was on Sunday after the launch of Sputnik I.

Ed Sullivan opened his weekly show with something like: "I'd like to congratulate the Soviets on their launch of Sputnik into outer space , but I don't speak German."

Ref the rest of the thread;

Friendships matter little, if at all, in international relations.

Hey bob. You mentioned [the ratio and the amounts of the salary check plus any benefits package.] ... I used to compile annual budgets for an onion and garlic plant. During the down season, I would calculate the estimated labor cost and multiply the grand total by 1.41, a benefits correction factor for doctors visits, babies, etc. The big bosses at other locations would base allocations for the upcoming season on those reports. This was early the '90s. That's just one example. Not sure what the current ratios are.

Labor costs in the US incorporate the Social Security FICA taxes, the Social Security non-FICA taxes (it gets technical and our non-US citizen AHF participants probably won't be familiar), the bloated paychecks, the multiple layers of workers, the insurance, (especially liability), etc, etc.

Tally, for example, the cost of public school teachers in California (to include retirement and health-care packages) and also the cost of California hotel and restaurant workers. Then compare these public sector and private sector labor costs,...THEN compare aforesaid with the labor costs of another post WWII large economy - perhaps with a population of 80 million minimum.

You should see the US prosperity after WWII required US Government subsidies by domestic and foreign borrowing with debt obligations coming due well into the future.

Hi Bob. Sorry about projecting the confusion between tactical and strategic economics. ... Seemingly, the ratio between the grand total of labor costs paid directly to workers and the grand total of labor costs + benefits paid would be an economic strategic indicator. Since the benefits correction factor is instead tactical, permit me to return to the strategic side. ... Tax collected should equal government expenditures. Redistributing revenue-generating factories away from American soil bypasses U.S. taxes. Less tax revenue results in budget pressure. ... Since 1996, America has averaged an annual half-trillion dollar trade deficit. The grand total of those trade deficits rounded off amounts to about ten-trillion bucks. The U.S. budget deficit is rumored to be $20 trillion. The budget was balanced in 1996, according to unverified claims I've heard. Therefore, under America's current system, a trillion in trade deficits results in a two-trillion budget deficit. ... The Hoover Dam cost $49 million (in 1930s dollars) and generated trillions of dollars in revenue. The construction boss would have been a conservative. Another conservative might have voted against funding the dam. In the above example, there are two types of conservatives. ... Strategically, which conservative would be better for America? ... More people working and paying taxes instead of collecting assistance has a multiplying effect on the economy and makes complicated economic formulas work better. ... China is addicted to a large trade surplus. It can't go cold turkey. How long will balancing the numbers take? Years, decades, centuries? An independent U.S. should not be dependent on China. America is not dependent on Russia. ... ... Nevertheless, I'm all for prosperity after WWII in China and Russia.

wm wrote:China survived because the US defeated Japan.

The Soviets defeated the best japanese army stationed in Manchuria.


The Soviets were just the enablers of the later Maoist genocide.


Soviest permitted Mao to win the war and to unite China except Taiwan which became Chang Hai Check's China.
Let's imagine there were no US-Japan war, SU would still have crushed the Japanese army in 1945 and freed China.


Without the Soviets China would be a modern and rich country, not the generic fascist state it is today (Mussolini would gladly approve the state capitalism in today's China).

China was modernized by Mao thanks to the soviet support too. The job is not over, but China has done a lot till today. Look at other countries in the world like India or in Africa, they are looking pitiful compared to China.


It was actually the Germans who prepared and armed the Chinese, and allowed them to die with honor at Shanghai.

[You actually think China is more prosperous than Russia?] That's a good question David. I never really thought about it in that way. I was thinking more in line of, Russia would have been more prosperous if Stalin had milked the Marshall Plan for the Soviet Union. The Soviet Union defeated Hitler, but the war would have ended in stalemate without help from Uncle Sam. Stalin could have continued his policy of accepting aid from America after the war. ... Suppose Roosevelt had kept V.P. Wallace. ... Wallace and Stalin were pals. ... Dependence on long-term trade surpluses is bad strategy. China's prosperity will have to take a dip at some point when its large trade surplus begins to dry up due to the Laws of Math.

"Stalin could have continued his policy of accepting aid from America after the war"
Yes, i asked myself this question many times too : after all, why Stalin didnt accept US aid ?
The answer is : he didnt need it. So why give money to USA if you dont have to ?
During the war, SU needed US support, but in 1945 it didnt anymore.
Top

I think you're right David. Even when Stalin was receiving peak aid from the U.S., he sarcastically called it "Spam."

Instead of the word "tax", recommend we use word "revenue" since the US Government relies on funding from additional sources besides taxes - especially since President Wilson's "elastic money" (The Federal Reserve System).

Revenue, to include taxes, do not allow for self-liquidating accounts. This is the history of the US. US prosperity after WWII incorporated the US being a victor nation (I mentioned the Bermuda Accords as an example).

Trade deficits are one category. There are other accounts besides the trade account such a the investment account, the US dollar account,... A foreigner must purchase US dollars to purchase petroleum in the world market. (You know I'm omitting the numerous exceptions because web forums will never serve as an adequate for a hotel conference room.)

If I may, ... ... ... I recommend you balance studies of history with rest and leisure time for recuperation....the study of history is fatiguing. Life is just too short to listen to "unverified sources" about a 1996 balanced budget. In 1950, American male workers started to leave the labor force. This correlates to the 1935 Social Security retirement program. I'm avoiding the mention of the political issues and current events. My narrative is cloudy here because of these omissions but still crystal clear when compared to some / most of the national media.

The Hoover Dam is an excellent illustration. I do not use the word "conservative" since so many definitions are attached to it, it's easier and shorter to use narrative for descriptions.

We must not discuss non-history matters such as "which...better for America". The question is more political than historical.

China is important but peripheral to the thread theme "Prosperity After WWII".

Thanks Bob. I looked up the Bermuda Accord.

The above link shows the Bermuda Conference communique text from December 8, 1953. The British, French, and the U.S. were worried about worldwide communist aggression. The Big Three, as they were called, were also attempting to pressure the Soviets into freeing Eastern Europe. ... Bermuda seems to have been a popular place for world conferences. I saw one article saying there were thousands of treaties signed in Bermuda.

The Bermuda Accords are an example that, after the WWII military victory, there was much more to the world conflict still needing to be addressed.

Yes, Bermuda is a prominent place for world conferences - except during hurricane season (June to November). San Francisco, Davos, and that rugged town in Wyoming, where the Federal Reserve employees meet, are substitute locations to accomplish the public's business.

Meanwhile, back at Dumbarton Oaks, Georgetown, Washington, D.C., the coffee break's dessert cart is a work of art.

Hi Bob. ... Additionally also, homes of several high-level Soviet officials and marshals resembled museums of war loot. ... After WWII, Stalin may have been jealous of Soviet loyalty, one reason for him not collaborating with the Western Allies. He noticed some Soviet citizens respected the U.S. more than the U.S.S.R. immediately following WWII. ... Stalin had passed away earlier in 1953 by the time of the Bermuda accords in December. Beria might have been more easy for the West to deal with, but he was arrested after Stalin's death. Beria, in prison, would be shot for treason at the end of December.