Discussions on the economic history of the nations taking part in WW2, from the recovery after the depression until the economy at war.
27 posts


Maddison's time series calculations for GDP by PPP (for what its worth) and world bank data, but it is of limited suitability for assessing economic power prior to the globalized era.
https://www.rug.nl/ggdc/historicaldevel ... l-maddison
http://www.ggdc.net/maddison/oriindex.htm
https://www.youtube.com/watch?v=4-2nqd6-ZXg
You do not have the required permissions to view the files attached to this post.
Top

Excellent as it happens I am at British Library on Tuesday and so can pick up the entire article: "Das Bruttosozialprodukt in Deutschland nach den amtlichen Volkseinkommens- und Sozialproduktsstatistiken 1901-1995" for background information and definitions. Looks like a comprehensive attempt at assessing GNP for wartime period.

I have net trade (occupation) figures from Boog: Germany and the Second World War Band V-I and have another set of occupation figures from Kleman & Kudryashov "Occupied Economies: an Economic History of Nazi-Occupied Europe, 1939-1945"

Various calculations exist, but I think the only way to get an overview and to assess the extent would be via the F.I.A.T. reports. https://digitalcommons.unl.edu/libelecrefmat/6/
Obfuscation attempts by the regime are an obvious problem, but the calculations have been corrected ("Verschleierung mit Statistik: Kriegswirtschaftliche Desinformation im Nationalsozialismus and Bericht zur deutschen Wirtschaftslage 1943/44").

could be useful: "Paying for Hitler’s War: The Consequences of Nazi Hegemony for Europe "
https://academic.oup.com/gh/article-abs ... m=fulltext

Note that Hoffman's and the estimates based on the StRA, are overall too low (derived from tax returns). https://academic.oup.com/ereh/article/18/4/371/2465349

A collection of literature: https://mpra.ub.uni-muenchen.de/87664/

This passed through my mind spontaneously, atm.
Top

My starting point for this is Kleman (as above)
2019-12-09 02.38.02.jpg
which can be shown diagramatically:
German War Effort.jpg
and this would suggest from your GDP table that about half the economy went into the war effort as 1940-1944

The other source is Germany and the Second World War V-II trade figures:
DRZW 5-1 German Trade Figures 1940-1945.png
however these seem too low as for instance France totals RM 3 billion where as Kleman suggests a figure of RM 40 billion.
You do not have the required permissions to view the files attached to this post.
Top

This initial calculation refers to the core territory, so not all Anlagen are included, while the occupation costs in Lindholm seem to be incomplete, but it cannot differ that much. Half the figure seems about right:
Kriegsausgaben Anteil BSP 1939 bis 1944.jpg
Thats an annual rate (geometric) of about ~48%.


however these seem too low as for instance France totals RM 3 billion where as Kleman suggests a figure of RM 40 billion.

Saw this French article today too.

Had a look at "Paying for Hitler’s War: The Consequences of Nazi Hegemony for Europe" (https://academic.oup.com/gh/article/37/2/261/5368153) which has a good introduction with plenty of recent sources on this subject and then country by country discussions but does not advance overall picture from Klemann.

With GNP of economy plus revised trade figures on a year by year basis the next task would be to divide up Klemann's "end of 1944" totals into constituent years. Could use "Resource mobilization for World War II: the U.S.A., U.K., U.S.S.R., and Germany, 1938-1945" as a guide unless I can find any later estimate or source. What do you think?
Top

I think it is almost impossible to fully track the extent, but you should be able to approximate it well. I guess it depends on how precise you want it to be.

Seems to be a more recent publication, may prove to be useful.

I do not consider Harrison's work on WW2 to be that good, contrary to the work released on WW1, at least not on the German economy, but w.e.

Here is the table from Economic consequences of the war, expands on the data listed in Vol. V (BA R3/1626). I haven't seen the original, but there seem to be some typos. 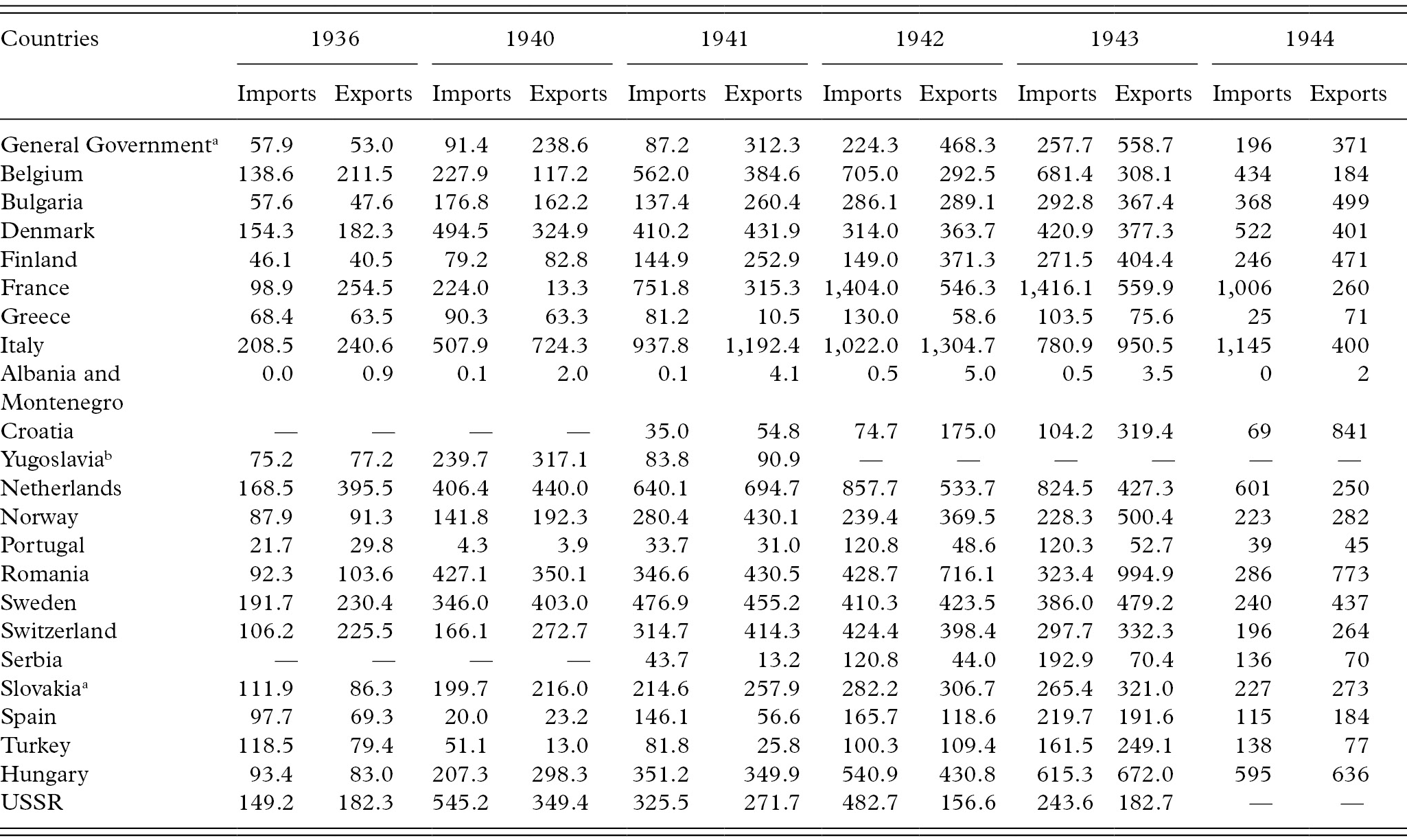 Here is the table from Economic consequences of the war, expands on the data listed in Vol. V (BA R3/1626).

It is the same table with data added for 1936 and then some the totals broken down into their constituent countries.
Overall effect is the same, net trade for the entire war period is around 1 billion RM when Germany GDP runs at 618 billion RM or 0.2% of GDP which seems far too low.

I wonder if there is any surrounding text to explain what these figures refer to, since DRZW V-2 offers no explanation.
Top

I wonder if there is any surrounding text to explain what these figures refer to, since DRZW V-2 offers no explanation.

We would need information from Hunscha. Did you check the financial extractions in "Importboom"? Wehrmacht goods were exempted from tariffs. Scherner reevaluated trade flows.
Paying for Hitler's War trade flows, extractions.png

The booty ("Kriegsbeute") in Klemann/Kudryashov is misinterpreted though, per international law it is defined as "all confiscated weapons, military assets, resources from the government and looted cash from public coffers, without any considerations" ("Krieg auf Kosten anderer p.386, Kilian").
Krieg auf Kosten anderer Kilian Gesamtbilanz über die Leistungen der besetzen Länder 39-45.png
You do not have the required permissions to view the files attached to this post.
Top

There is a lot of reading here.

where does Hunscha come from?

The second point is that Klemann came out in 2012, "Paying for Hitler’s War" came out in 2016 yet there has not been a serious attempt to re-write either Milward's Blitzkrieg Theory nor the Inefficiency Theory (p46 Paying for Hitlers War). I suspect this reluctance comes from the fact that these calculations are estimates and speculation and that several of them would be needed to create a new theory. Like a house of cards it would only take one to fail....

However bearing this in mind, these data series could be combined to give a rough estimate of German/Europe GDP to compare with Soviet Union.
Top

Guys this is a great thread, thank you for the references. I've just started working through some of them; this conclusion of Scherner's "Europe's Contribution" is particularly noteworthy (as is the article if you can read German or slog through Google Translate - I do a combo of both):


It can be shown that Europe’s contribution to the munitions the Wehrmacht needed was significant, approximately matching the share foreign troops
had on the Eastern front. At least one quarter of the weapons and equipment used
by the Germans was produced abroad. Moreover, it can be demonstrated that Albert Speer, appointed armaments minister at the beginning of 1942, also benefitted
from previous achievements in this respect: from the start of World War II onwards, Nazi Germany systematically expanded the proportion of occupied
Europe’s industrial base that was used for German industrial orders. This research
outcome provides further evidence against the Blitzkrieg-Hypothesis.

I enjoyed reading Tooze's book but have always been suspicious of it. His portrayal of Western Europe as a sink-hole of Nazi investment always seemed fishy to me, as it relies on tricks like eliding the inclusion of Alsace-Loraine's output as German for most of the war and not discussing that French firms produced much of the Atlantic Wall. This paper is a good counter-weight to Tooze's narrative (although it's nice towards Tooze, the giant of the field for now).
Last edited by TheMarcksPlan on 13 Dec 2019 12:49, edited 1 time in total.
https://twitter.com/themarcksplan
https://www.reddit.com/r/AxisHistoryForum/
https://medium.com/counterfactualww2
"The whole question of whether we win or lose the war depends on the Russians." - FDR, June 1942
Top

The other source is Germany and the Second World War V-II trade figures:
DRZW 5-1 German Trade Figures 1940-1945.png
however these seem too low as for instance France totals RM 3 billion where as Kleman suggests a figure of RM 40 billion.

I'm way behind you on this literature but before I dive in further a high-level question: These tables and the (your?) war effort graphic seem to be based entirely on export/import flows and specifically on surpluses - is that right? To that extent, I can see the importance of Scherner's correction of the Staatlische data...

But even beyond that, are there sources compiling both the corrected trade flows and services rendered by occupied countries within their own borders (or in other non-Reich territories)? Presumably these wouldn't be categorized as imports in official or even revised accounts. Here I'm thinking of stuff like the Atlantic Wall and French/Belgian/Dutch/Norwegian contributions to it, of the fact that Ukraine fed most of the Ostheer for most of 3 years, and myriad other non-import services and goods provided by occupied countries to the Wehrmacht.
https://twitter.com/themarcksplan
https://www.reddit.com/r/AxisHistoryForum/
https://medium.com/counterfactualww2
"The whole question of whether we win or lose the war depends on the Russians." - FDR, June 1942
Top

Your starting point is "Occupied Economies" and then "Paying for Hitler’s War" for specific country by country assessments.

Often they have very different issues, France suffered from trade (with a highly skewed exchange rate) outright confiscation, swapping of gold reserves for RM, labour and machinery removal and work carried out directly for the Germans within France (Atlantic Wall). Ukraine has a different set of exploitation with greater amounts of looting and labour removal and less trade.

Allies suffer similar issues and some like Italy have both Allied trade and later exploitation.

One of the principal difficulties obscuring this view, as far as I can see, is the exchange rate manipulation through occupation banks. This makes it very hard to quantify even the known trade and of course looting is not recorded anywhere.
Top
27 posts