Discussions on the fortifications, artillery, & rockets used by the Axis forces.
7 posts • Page 1 of 1

I am not sure if this is a german gun, a captured gun used by germans or just a destroyed enemy artillery piece. I would need to know because of the emblem. If I can post it to my unknown emblem section or not.

This could be French 155 mm howitzer model 17 by Schneider (Canon de 155 C Mk 1917 Schneider) which was for motorized towing (model 15 was for horse-draw) like the rubberized wheels indicate.
Top

I think this picture was taken in 1940 during the French Campaign. General appearance, power lines, Ger Troops appearance, and of course the gun carriage is French. I don't think it is the Canon de 155 C mle 1917 Schneider, the gun shield is too tall. It may be the Mortier de 220 TR mle 1916 Schneider.

Thanks to both of you! So I guess it is a french unit emblem. That would make sense because they usually used spades, cross and so on for company/battery designation.

Perhaps it could be a 155C mle 1917 Schneider cannon from which the barrel has been removed but not sure at all since the shield which has to be curved in that case and in fact we do not see very well the lower part of it on the photo. 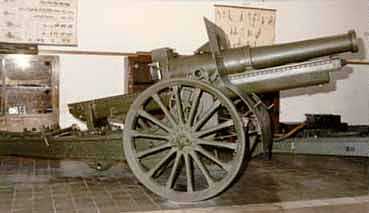 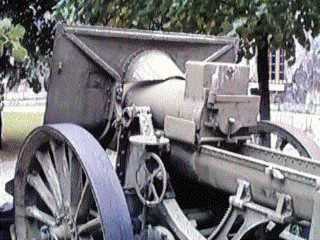 The shield seems in fact rather tall ... could it be the 220 mm Schneider ?

I have no better photo and here the barrel and the shield have been separated for towing ... I don't know why. Too heavy ? Reparation unit ?

But I cannot found trace of a french 246th artillery regiment in 39/40 on the front against germans.
Could it be an other nation ? This gun (at least the 155 mm) was also used by other ennemies of Germany like the belgian and polish armies.

Nevertheless the type of ace markings seems French but this kind of markings is normally mainly for tanks. This therefore a rare photo I think.

"In his otherwise excellent book Blitzkrieg : Armour Camouflage and Markings, 1939-1940 Steven Zaloga makes a mistake regarding tank tactical markings (the playing cards symbols seen on French tanks since the First World War). He describes the WW1 system and then notes "due to the differences in organization between 1918 and 1940, the first World War symbols were seldom used in their complete form" on WW2 tanks, which is not surprising since it was changed in November 1939 for modern tanks (First World War vintage Renault FT 17 light tanks still carried a variant of the old markings).

The new system used aces to identify the platoons or troops in the bridge playing order (Spade, Heart, Diamond and Club) and the order of the national colours (Blue, White and Red) to identify companies or squadrons (see example on the right). The company or squadron commander's vehicle was identified by displaying all four aces in the company or squadron colour.
These markings usually appeared on tank turret sides and were sometimes repeated on the rear hull. When carried by Panhard 178 AMDs, they were usually displayed on the hull sides. Smaller markings of this type were sometimes used on other vehicles besides tanks and armoured cars such as the sides of Dragons Portés 6x6 trucks or the 5e BCP's Lorraine APCs and very rarely on artillery pieces.

The size and precise location of these markings (and the decision whether to use them or not) were very much left up to the unit commander. The white borders shown on the examples to the right were not universal, although very common.

The coloured aces system was sometimes combined with the older company designation system of white geometrical shapes (Circle, Square and Triangle for the 1st, 2nd and 3rd companies respectively). This combination, often using hollow geometrical shapes or using the geometrical shapes and aces in separate locations, seems to have been more common on the Char B1 bis than on the other tanks."

You can see the gun (with the small handles) in the page 226 of the book "Small Arms, Artillery and Special Weapons of the 3rd Reich" of Gander and Chamberlain,

Re: Help identifying an artillery piece..

I agree with Antonio,

It is the shield of a 220 mm Schneider howitzer dismounted for transport.

We can thus determine that the shield comes from a towing of 220 mm attacked or given up.