Discussions on the small arms used by the Axis forces.
205 posts

We are now six years into this thread but, despite repeated requests, we only have one demonstrable example of a pistol being used successfully in combat and that not in WWII.

This was Sergeant York, who only resorted to his pistol after he ran out of rifle ammunition. In those circumstances he would presumably have used any other weapon to hand as well!

Are there really no other sourced examples of a pistol being used successfully in combat?

Not even one instance from WWII?

It is difficult to believe that with approaching 100 million men under arms and presumably tens of millions of pistols in use, there is not one verifiable example of the pistol's effective use in combat over six years! 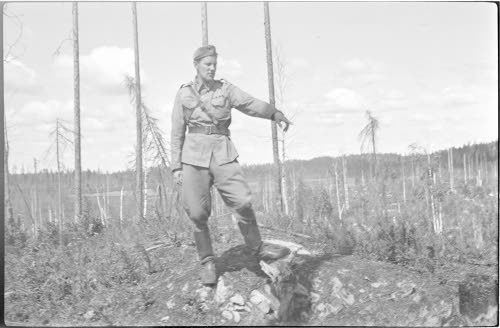 As mentioned pistols got successfully used in combat, not often, but they got used. And at least here the reports were practically never written with level of detail such as "individual soldier X used a specific type of small arm to successfully shoot the enemy".
Top

Part of a Mannerheim Cross recommendation at http://www.mannerheim-ristinritarit.fi/ritarit?xmid=63

"During the following courses of battle, on reconnaissance mission private Kosonen was suddenly confronted with an enemy politruk and three sublieutenants in a ditch. After immediately surviving the three sublieutenants and running out of ammunition in the magazine, Kosonen plunged into the next ditch with the politruk shooting at him. However, in the ditch, Kosonen got his pistol loaded and the battle of the politruk ended there."

Though not explicitly mentioned in the first three cases, it would seem that four enemies fell to Kosonen's pistol in that brief engagement. 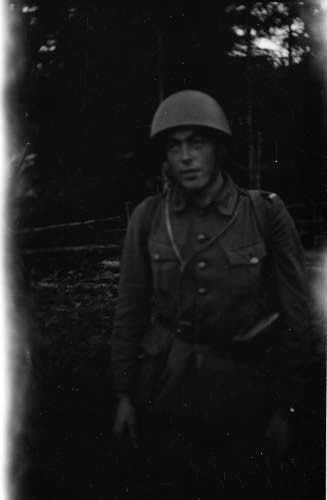 Original photo caption: "Lance corporal Aatto Veikkola, who first shot tank's driver with antitank-rifle and when tank's machinegunner tried to flee, shot him with pistol. After this Veikkola went to provide first aid to his company commander who had been hit, but only after he had saved the difficult situation in a forest road behind village of Pajari."

JTV wrote: ↑
21 Mar 2020 12:52
As mentioned pistols got successfully used in combat, not often, but they got used. And at least here the reports were practically never written with level of detail such as "individual soldier X used a specific type of small arm to successfully shoot the enemy".

That's right. Pistols (and revolvers as well) were typically used for self-defence (or for executing at close range...

) or as secondary "side-arms" (drivers, MG gunners, AT-personnel, tank personnel, pilots, medics etc.). Most front leaders armed only with pistol used either rifle or SMG in combat situation. But like Jarkko told it is not correct to state that pistols wouldn't have been useful in crtitical situations (just like a knife) in struggling situations between men. The poor accuracy was tried to improve with additional wooden breeches, but the real usefulness of these remained probably weak.

(In Finnish language "sub-machine gun" is literally "machine pistol" which well describes its role as more powerful pistol calibre close combat weapon between rifles and pistols. Some SMGs like the Finnish Suomi m/31 were although accurate up to 150 metres but it is an exception. There was also a special more powerful cartridge type, the so called "SMG cartridge", which was used in pistols as well, but tend to break the moving parts of ordinary pistols.)
Top

Personally I'd probably go with a Mauser M712 Schnellfeuer or an Astra 904. The 7.63 Mauser cartridge isn't uselessly wimpy, and the ability to convert my semi-auto handgun into a full-auto smg by flicking a selector switch and attaching a stock is a handy bonus. The "broomhandle" grip on C96 derivatives doesn't bother me.
Top

Sid Guttridge wrote: ↑
12 Mar 2020 12:01
We are now six years into this thread but, despite repeated requests, we only have one demonstrable example of a pistol being used successfully in combat and that not in WWII.

Some Chinese warlords during the 1920s-30s, such as Sun Chuanfang, maintained units armed exclusively with Mauser C96 pistols. These men saw frontline combat, although I don't know many details on their successes. Might be something for you to look in to.
Top

Mauser M712 might not be a poor choice with shoulder stock attached, but with it attached it becomes borderline pistol calibre carbine / submachine gun - and without it M712 seems pretty useless.

@JTV
To each his own. I don't know how you could consider a functional pistol in 7.63 Mauser "useless", but whatever...
Winston Churchill and Lawrence of Arabia certainly didn't consider the C96 a "useless" gun, and I'd rather trust the word of people who used this type of handgun in the field.
If you mean that the M712 would be "useless" in full-auto without the shoulder stock, then maybe I can agree with you. But that's what the selector switch is for

An M712 set to semi-auto without the shoulder stock would be far from "useless". Ditto to it set to full-auto with the stock.

Out of curiosity, have you ever actually fired an M712 or other C96 variant? I'm curious why you consider it a "useless" handgun without a stock.
Top

I have shooting experience with 7.63 mm and 9 mm versions of C96, in general I have about 30 years of shooting experience, plus I am a shooting instructor for reservists and train use of old military guns every now and then. How about you?

I referred to full-auto mode without stock when considered M712 useless, but I have to say that C96 has never impressed me. Without the shoulder stock and selector switch on semiauto, what you have is even by World War 2 standard a pistol design past its prime. Although not among the worst performers, just like basically every single round used in commonly issued sidearms, 7.63 x 25 FMJ is not something one should expect to be one round stopper. So in practical combat use the ability to achieve multiple good hits fast is paramount - but when it comes to the ability to do quick follow-up shots Mauser C96 variants such as M712 in "minus stock configuration" are exceptionally bad at that. Already by that time there were numerous other pistol designs far better suited for the task. In general I have always found the whole C96 design bulky and clumsy to use. For bigger picture one should also consider if it was cost effective or easy to manufacture by WW2 standards - and it was not.

@JTV I've never used a 9mm C96, I'm only familiar with 7.63 semi-auto only versions. I admit I've never tried to shoot anyone with it, so I wasn't that concerned with stopping power, but I certainly wouldn't consider it as "uselessly" underpowered as, say, 8mm Nambu. I also haven't experienced some of the common complaints that other shooters bring up with the C96, such as 'hammer bite' (because my grip tends to be lower than I suspect most modern shooters would use), and while some might find the weight front-heavy, imo it gives a feeling (even if artificial) of helping to compensate for recoil.

My main considerations for chosing the M712 were:

1) Was ammo readily available? 7.63 Mauser had been on the military and commercial market for several decades prior to WW2, so yes.
2) Would replacement parts be readily available? Same as above.
3) Do the stock and full-auto capability hurt or add to the design? Imo, they certainly don't hurt it, and its nice to have the options (which most handguns of the period did not offer).
4) What is the cartridge like? Imo, 7.63 Mauser was not the worst you could do for the period.
5) What's the mag capacity? 20 rounds is, imo, better than 7 (Colt 1911) or 8 (Luger P08 and Walther P38)

With those in mind, I recon it would be my personal choice for short-range personal defence ca. 1930s-40s. As I said above, to each his own

Another WW1 example of a pistol in combat.

His Majesty the KING has been graciously pleased to award the Victoria Cross to the undermentioned Officers, Warrant Officer, Non-commissioned Officers and Men:-

'For most conspicuous bravery and devotion to duty on the morning of the 1st September, 1918, during the attack on the village of Mt. St. Quentin. Prior to the advance of the battalion, it was necessary to clear up several enemy strong points close to our line. This the bombing patrols sent forward failed to effect, and the battalion was unable to move. Private Mactier, single handed, and in daylight, thereupon jumped out of the trench, rushed past the block, closed with and killed the machine gun garrison of eight men with his revolver and bombs, and threw the enemy machine gun over the parapet. Then, rushing forward about 20 yards, he jumped into another strong point held by a garrison of six men, who immediately surrendered. Continuing to the next block through the trench, he disposed of an enemy machine gun which had been enfilading our flank advancing troops, and was then killed by another machine gun at close range. It was entirely due to this exceptional valour and determination of Private Mactier that the battalion was able to move on to its "jumping off" trench and carry out the successful operation of capturing the village of Mt. St. Quentin a few hours later.'

https://en.wikipedia.org/wiki/Robert_MacTier
Mactier VC.jpg
You do not have the required permissions to view the files attached to this post.
Greetings from the Wide Brown.
Top

Interesting, but again the pistol appears to be a secondary weapon to back up the primary weapon - in this case grenades. It seems likely that the pistol was here used to finish off men already more or less incapacitated by the grenades.

Had the submachine gun already been invented, then that would surely have been preferred.

Sid Guttridge wrote: ↑
05 May 2020 17:26
Had the submachine gun already been invented, then that would surely have been preferred.

It had been, just not by the British.