Discussions on the small arms used by the Axis forces.
10 posts • Page 1 of 1

Looking for some translation help really but the answer I'm looking for will be found by your historical knowledge more than anything.

I have a passage I am translating where a Gebirgsjäger is complaining about the weight of his ammo pouch and haversack and his "Seitengewehr".

It is important for historical accuracy that I translate this correctly and so I am wondering if anyone can confirm if he would have meant a bayonet, or if the Gebirgsjägers would have carried some other kind of small arm, such as a pistol or a knife, in which case I will translate it as "side arm".

The paragraph in question for German speakers:

A 'Seitengewehr' is definitely a bayonet.
He who lives by the sword, should train with it frequently.
Top

The term means "bayonet". Source TM 30-506, German Military Terms, 1944.
You do not have the required permissions to view the files attached to this post.
Top

Thank you for confirming!
Translated Memoirs of Otto Poschacher, Gebirgsjäger in the 2nd Gebirgsdivision.

could you please post your translations requests in "Translation help: Breaking the Sound Barrier" subforum, Mrwolfe? It males helping you easier then.
You already know now that a "Seitengewehr" is a bayonet. For your information "Gebirgsjäger" is the singular as well as the plural. There´s no "Gebirgsjägers".
Now to the translation of your text:
" Kuruc and Turks, when when does the marsh finally take an end! 'ranted Mehil, a long "human" and gunner in my mortar group. 'Certainly only when the war is over,' I replied, but I didn´t find it funny. On the right foot a decent blister, the hips scuffed by the leather clutch that through the load of cartridge pouches, the haversack and spade and bayonet who rubbed continuosly on my hip bone. I dragged myself no less bad-tempered through the country than anyone of my fellows."

"Kruz-i-türken" = "Kuruzen and Türken" is used as curse nowadays and derives from the Kuruc and Turks. Butthe "-i-" is not from german but Croation as such minority, beneath Hungarians, live in my state. Kuruc and Turks did invade my country here were I live (east of Austria) and did destroy many villages of whom a couple were not built up again. But that´s another story.

The use of "Mensch = human" I can´t explain myself. In my opinion it should read "Mann" = man,guy. And then the text would be "Mehil, a tall guy.."
In case you need further help you´ll find me, and other helpful members, in "Breaking the Sound Barriere. Just post your request there.
Top

Thanks for your help.

I usually do post my requests in translation help but the clarification that the Seitengewehr was a bayonet was something I figured more dependent on a knowledge of the equipment these guys had than it was an effective translation.

For your interest though here is that passage as I have translated it so far:

„Gadzooks! when will the damned march finally end?“ cursed Mehil, a beanpole of a man and a gunner in my mortar squad.
„No doubt as soon as the war is over,“ I replied, but I wasn’t in a laughing mood myself. A sizeable blister on my right foot, my hips chafed sore from the leather belt which, with the weight of the ammo pockets and haversack and spade and bayonet constantly chafed against my hip bones. I hauled myself about the place no less ill-tempered than all my other comrades.

Your point on the curse "Kruzitürken" is very interesting, but in the passage I feel that it is more the case of using an expletive for the sake of using an expletive, and since I understand "Kruzitürken" to be a particularly aged statement I thought using the very aged "Gadzooks" would be the most effective expression to use in English.
Translated Memoirs of Otto Poschacher, Gebirgsjäger in the 2nd Gebirgsdivision.

I did explain you only where the "Kruzitürken" came from. Of course a literal translation wouldn´t make much sense for foreigners who don´t know the background of this composed/made up term. Hence I find your solution excelent.
I suggest you change the "with the weight of the ammo pockets...." into my version. The many repeated "and" are an absolutely no - go nowadays. But it´s your choice to realise the hint of a native speaker or do ignore it.
Top

Hi,
you are right in the translation of Mensch being (a) human, man. But there is more then just that.

a.) In imperial Germany and or Austria (but actualy upto and occaisionaly even after ww2) a uniform wearing person [soldier, police, governement official etc.] (sees and distinguishes himself) as (a class) better compared with the or a (simple) civilian human, man, person.
A Spiess or NCO would curse and name a poorly performing recruit as "...Sie Mensch!". A policeman would use the term in just the same manner, distinguishing himself from the just civilian man.

b.)The complete expression is "ein elendslanger Mensch". This adjective states further, Mehil was also a (very) thin and very tall (exceeding the average height by far) person. This circumstance might have Mehli's superiors call him a "questionmark", because of his likely posture of not (being able to) stand(-ing) straight/ upright.

There you go. As said earlier, a litteral translation does not tell you the full story.
Regards
Christian M. Aguilar
Top

a.)[...] A Spiess or NCO would curse and name a poorly performing recruit as "...Sie Mensch!". A policeman would use the term in just the same manner, distinguishing himself from the just civilian man.
b.)[...] This circumstance might have Mehli's superiors call him a "questionmark", because of his likely posture of not (being able to) stand(-ing) straight/ upright.[...]

regarding to lit. a.): At least here in my corner of the country the "Mensch" would be placed at the beginning at the sentence, eg. "Mensch, reissen sie sich zusammen!" = "...., pull yourself up!". That´s a sentence recruits hear a lot during basic training in the army. Especially during a marsh or sport.

Referring to lit. b.): That´s quite a wild guess that the soldier in question wasn´t able to stand upright. As we know from eg. the Austrian Guard Battailon (minimal size 176cm] and other ceremonial units the opposite might be true: 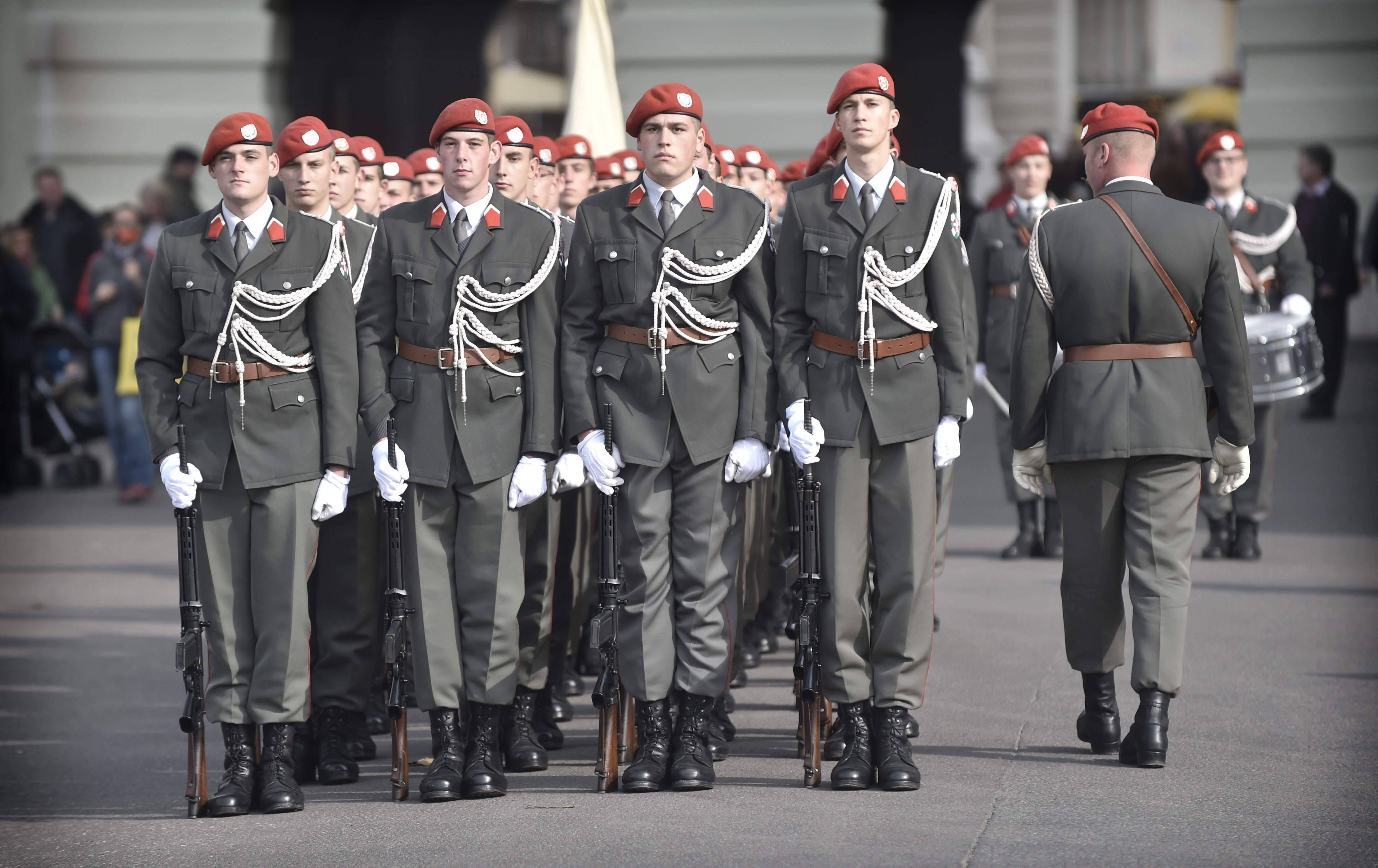 Source: https://en.wikipedia.org/wiki/Gardebataillon
As a sidenote: In my hometown and neighbouring villages/towns in general boys are called "Bub" and girls "Mensch", in dialect "Meinsch". This leads often to bafflements with foreigners. And the "Mensch" is not used as dismissive or disrespecting manner.

Hi Roman,
I don't want to contest what you are saying, because upto a certain extent, you are right.

But on your lit a.):
You might have overlooked a very important part of the context I wrote: "In imperial Germany and or Austria ...". Both nations have changed since then. Nowerdays "Sie Mensch" would certainly not be used like that anymore, a.) it's an old fashioned way of expression, b.) more importatnt, being considered a raceistic expression, it would also be illegal to use it, both in the German and Austrian army.

On your lit b.):
I did not so much do a wild guess, but an educated assumption. Consider this:
Again in imperial Germany/ Austria. A (significantely higher then average) tall person with a poor background (e.g. from a poor family) with then! quite common malnutrition symptoms, grows up having to also physically hard labor, resulting to be very thin and grow a bad posture (leaning over, not any more stretching his legs when standing, because the ceilings are so low, etc). This person would in peace times probabely not be drafted into the army. But in a war, and the mentiontioned text makes me believe this is probabely even the second half of ww1 and with grade A recruits not anymore available, the situation changes. In such a time of need, a grade B, Grade C or even grade D recruit would certainly be drafted, even if he had such limitations. As long as this person can do, what he is supposed to do, carry his gear, march at least a bit and fight/ charge the enemy, why should he not serve in the army? For sure he will have encoutered the in a.) described situation in boot camp or basic training. A period drill seargent will still be the drill seargent for that matter.
If this person, were so significantely tall, he -in basic training and in his intended unit- would certainly be exempted from paradeing, representing duties, leave alone from serving with an explicitely ceremonial gaurding unit. But his limitations will not disqualify him from being drafted and sent to the front, where his comrads will still describe him "ein[-en] elendslanger[-en] Mensch[-en]", only this time just in leyman's slang, without the discriminating element in it. This is exactely the situation pictured in the text.
Regards
Christian M. Aguilar
Top
10 posts • Page 1 of 1