Discussions on the small arms used by the Axis forces.
10 posts • Page 1 of 1

Looking for a PTRD 41 Penetration Curve chart if anyone has one handy, I used the "Tool" but it seams a bit optimistic at range given the size of the Projectile. 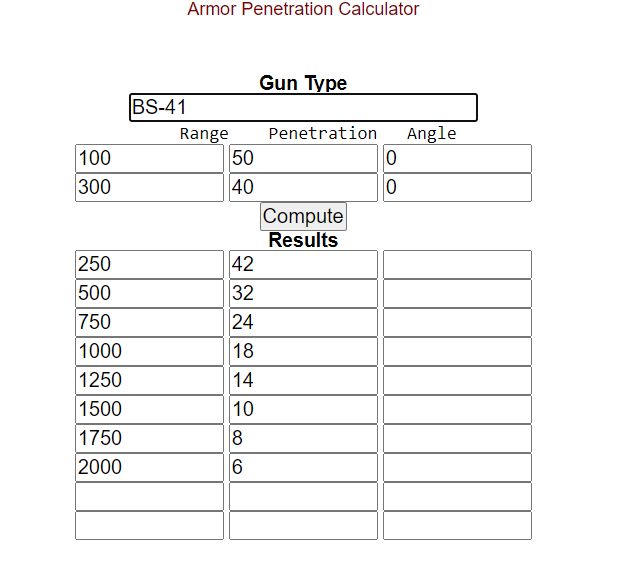 It’s helpfully but it’s actually from the same source that I pulled those penetration figures from, although I was using a different type of ammunition for that gun, all I can seem to come up with our two penetration values so I’m having to use that tool to extrapolate, I was hoping for actual test data instead of basically a very very educated guess at what the range data looked like, my gut is telling me that past about 500 yards penetration data should start to drop off more dramatically than it does, Or more rapidly than the tool suggests it does
Top

Understand what you mean about the tool. It is probably calibrated for heavier projectiles that don't suffer as much penetration decay as the lighter 14.5-mm projectile did.

ETA. One predictive tool I use that is based on the performance of various projectiles estimates 29mm at around 450 meters with a straight-on hit; not too far off what the Polish Wiki claims.

Those are some nice links thank you, it looks like we are still left with extrapolation though at the end of the day
Top

Extrapolation, yes. That is pretty much the case in most estimations of armor penetration because there are so many variables (like the hardness of the armor plate). Somewhere in Soviet archives (probably) are the results of ballistic testing done when the projectile was under evaluation. I note it still seems to be in use today with Russian heavy machine guns. There are also Chinese copies of the projectile. These items are of interest because data on them won't likely be far off from the performance of the B-32 projectile.

Regarding the tool you pointed out ... it does not appear to distinguish between projectile type? A full diameter AP round and a sub-caliber sabot shot have very different ballistics.

TY for that Chart
It seams far more plausible


Which was the more common round, and what were there service entry dates ?
Top

The Russian Wikipedia gives these dates of introduction:

The BS had a tungsten carbide core and my guess is that it was far more rare as an available ammunition type than the B-32.

That article was the Wikipedia source for those intro dates. Interesting bit is that it appears the Soviet troops did not have the antitank rifles at the start of the Russo-German war

Also saw a bit that said the ATRs were effective out to 2,000 meters, but I assume that is for use against soft targets.

That article was the Wikipedia source for those intro dates. Interesting bit is that it appears the Soviet troops did not have the antitank rifles at the start of the Russo-German war

Brady wrote: ↑
16 Jul 2021 22:38
That article was the Wikipedia source for those intro dates. Interesting bit is that it appears the Soviet troops did not have the antitank rifles at the start of the Russo-German war

That is correct - when the Germans launched Operation Barbarossa in June of 1941 the Soviets did not have antitank-rifle that would already have been manufactured in any real numbers or one that would have even been in production. They had started development of antitank-rifles already in early 1930's with multiple prototypes (most of them in 12.7 mm x 108) from several design teams.

After testing Nikolay V. Rukashnikov's antitank-rifle was officially approved for Red Army in August of 1939. Rukashnikov's rifle was 14.5 x 114 caliber gas-action semiautomatic 5-round magazine and while officially introduced, soon proved unreliable (partly due to sub-standard ammunition), hence its production was stopped already before mass-production stage. While most of the reliability problems of the rifle were fixed, it was already too late - it did not re-enter into production even later, since it was also found to be too slow & expensive to mass-produce. August of 1940 the Soviets stopped all antitank-rifle production due to false intelligence that suggested new German tanks being so heavily armored that 14.5 mm x 114 cartridge (and even antitank-guns) would have supposedly been ineffective against them. Only after facing German offensive they came to realize how serious a error that had been and started mad rush of developing of antitank-rifle suited for mass-production - which resulted introduction of PTRD and PTRS.

The Soviets also had introduced 14.5 mm x 114 cartridge in year 1938, but did not have standard armor piercing bullet designs for it until much later. The first standard AP bullet design was B-32 (with steel-core) officially approved in July of 1941, followed by BS-41 (with wolfram-carbide core) already the next month.
Top
10 posts • Page 1 of 1