Discussions on all aspects of Imperial Germany not covered in the other sections.
244 posts

I think the general term was Seesoldaten.

Was it?,i was thinking something with the kaiser or marine in german in it.That sounds like a individual term,was wanting something more on a unit as a whole etc...
Top

Thanks CNOCK for the info and pictures,that last one is realy good.

Peter H wrote:Correction--raids were at Zeebrugge and Ostend.

This is a slightly different question. The photo of the POWs from the Zeebrugge Raid is of interest to me. One of these men is not a Marine but RN. He is part of my family. That is about all I have at the moment. He was missing and then it seems a POW. Hard time finding where/when/how etc. The photo I have seen somewhere on a site but no other info but it did point out the one RN man as Aloysius Smyth. (tall one next to the man with the sling). Can you help me ? Where did you find the photo and perhaps POW info for him from your knowledge .

Welcome to the forum Erin!

What a great way to start here, you recognise someone in a photo as your relative? Amazing! Is it this photo, posted below? How do you know he was RN not RM? I would have thought the Marines would be in khaki and the sailors in blue (though am no expert)? Do you know anything more about him?

I didn't recognise him "The great war forum" had this picture and one of the topics marked him out as the "burly" one next to the man with the sling. It was a discussion about 2 unknown graves from the raid. This picture of the POWs was produced as part of the discussion. They say everyone else are Marines and he is RN.I would need to refer back to the forum for the details. I have pulled his naval record which is damaged so bits are illegible. But he is Royal Navy not Marine. I am no expert but as I am finding many males in the family were either Royal Irish Constabulary, Canadian Army (Engineers), SOE (WWII) , Royal Marines I am being led into trying to tackle the world of ranks/uniforms/wars/battles etc.

From Great War Forum : "You're right that photos of Vindictive's survivors appear to be almost exclusively in naval (ie non-khaki) uniform, but then again the storming parties would have dispersed back to their bases/ships as soon as they returned to Dover, leaving only the Vindictive crew to smile at the cameras. Attached is the famous picture of the Zeebrugge POWs, who are almost all marines except for the burly chap second from left in front row who is AB Aloysius Smyth. He is clearly wearing khaki."

His record says Balloted for VC for Zeebrugge Raid. Some partially destroyed notes that I can see in caps "MISSING" and then some Prisoner of War and located at a camp name that can'r be read. The rest is unreadable. His record tells he joined RN at 12yrs old. He is Irish born Dungarvan to a RIC Officer.

The above quote says the "famous photo" but I can find nothing about WHY and where it comes from and how do they know this is Aloysius. I would like to know all of that and where/how and how long he was POW - all about what happened to him and after. I have seen a record of him coming into the UK (still RN) but on passenger ship from Canada in 1922 to return ireland . It looks as though he left RN in 1923 , although the record is very damaged.

Where did you get the photo from and can you help me along in the quest for Aloysius? proving really tricky to find anything at all on the POWS(strange).

MG1918.jpg
You do not have the required permissions to view the files attached to this post.
Top

In my photo album is similar photo with the prisoners. I think it could be the same group of the British soldiers. 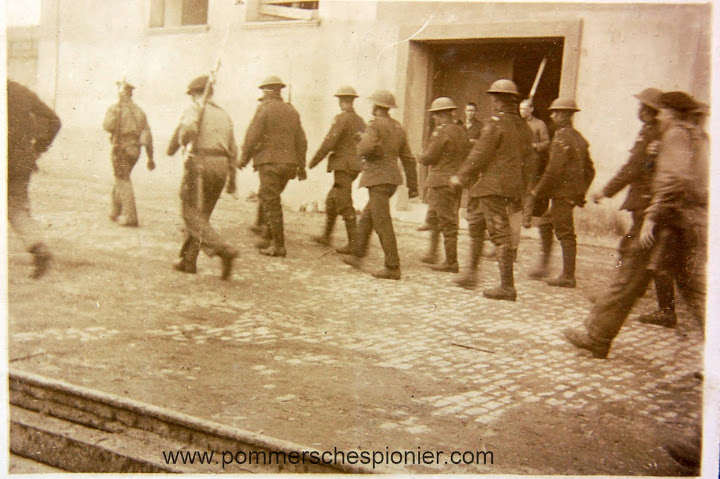 Transporting to the land prisoners from the sunken English torpedo-boat. (I translated original description of this photo)

Milosz, these are POW's from the Zeebrugge Raid on St-George's Day 1918, and indeed the same soldiers as on the other photo !
Top

I am not shure if this is the right section to post this, but I don t know where else I could ask about this.
So if this is causing annoyance, I want to apologise in advance.

Are those two guns in the pitcure below some of the german coastal batteries at the Flandern coastline?

Picture are from Ebay.

Thanks for your help, greetings Saska
You do not have the required permissions to view the files attached to this post.
Top