Discussions on all aspects of Imperial Germany not covered in the other sections.
34 posts

The huge German gun called Big Bertha which bombed Paris is captured and put on display in the city it bombed.

That's in fact the Amiens gun captured by the Australians in 1918:

The second Amiens gun,the Chuignes Gun, was also captured by the Australian 1st Division on the 23rd August 1918.

This gun, known as the Chuignes Gun, was a German 14 inch (35.6cm S.K.L/52) Heavy Naval gun used to bombard Amiens about 30 kilometres away. The gun with its 21 metre barrel and concrete foundations weighed more than 500 tons and could fire a one ton projectile at least 38 kilometres. It was the largest gun used to fire on Amiens and had been in action since early June 1918. The first barrel was worn out, a second was fitted and the gun was again in action on 7 August 1918. After firing only 35 shells it was destroyed by the Germans on the morning of the 8 August 1918.

This was the largest gun captured in the war by any combatant.

This gun was on display at the Australian memorial at Villers-Bretonneaux
until the late 1930s.
Top

to clear up a general misconception:

the "Paris Gun" (or known as "Kaiser Wilhelm Geschütz") was not a "Big Bertha" and neither a railway gun. it fired a 21cm shell opposed to the 42cm shell fired by the Big Bertha, which is not a railway gun either (although i belive having read that 2 barells were mounted on railway carriages, but i have yet to see pictures). so it's generally safe to assume that when you see a railway gun, it's not a "Big Bertha" and certainly not the "Paris Gun". it's probably a 28cm Bruno or a 38cm Max.
Top 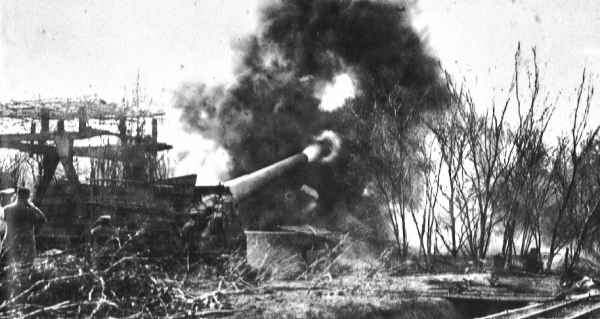 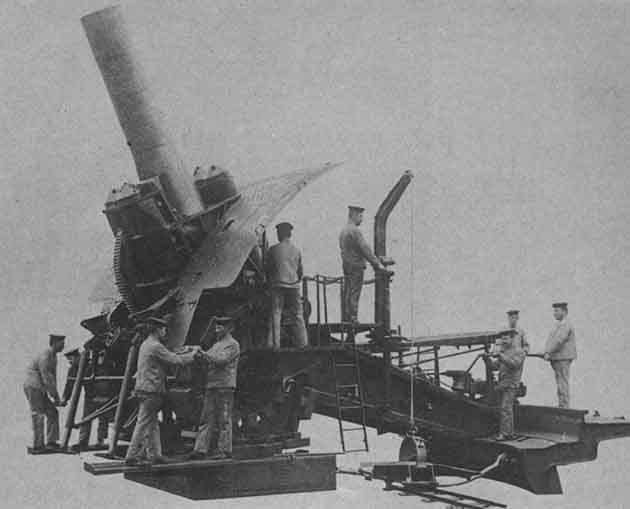 dead-cat,
Your point is great. I mentioned in the other thread "Paris Gun", that many sources confused these guns and thanks for clearing that.

In 1900 Alfred Krupp's armaments factory at Essen, Germany, began building a 350-mm howitzer that could fire an 800 lb shell over 10,000 yards. In 1908 the German Army asked Gustav Krupp to build an improved version of this gun with the capability of destroying the heaviest fortification.

By 1912 Krupp had produced a 420mm weapon that fired a 2,100 lb shell over 16,000 yards. As it weighed 175 tons, it was designed to be transported in five sections by rail and assembled at the firing site. This concerned the German Army and they asked for it to be adapted to be moved by road. By 1914 company had produced a mobile howitzer called Big Bertha (named after Gustav Krupp's wife). This 43 ton howitzer could fire a 2,200 lb shell over 9 miles. Transported by Daimler-Benz tractors, it took its 200-man crew, over six hours to re-assemble it on the site.

On the outbreak of the First World War, two Big Berthas and several Skoda 30.5 howitzers were erected outside the fortress of Liege in Belgium. The first shells were fired on 12th August at the ring of 12 forts around the city. By the 15th August all the forts had either been destroyed or had surrendered. News of the success of this new weapon at Liege encouraged other countries involved in the conflict to produce large mobile guns.

Both taken from here

19 April 1915 Prelude to the Battle
German 'Big Bertha' bombards Ypres
When the French left the sector east of Ypres and handed it over to the British in mid April they took with them their anti-aircraft guns, which were not replaced by similar weapons in the British force. As a result, the number of German aircraft flying over the Allied lines increased. In particular German aircraft made reconnaissance flights for the German artillery to help them register on sites of importance. The towns of Ypres, Poperinge and the villages in the immediate area began to be shelled with more intensity from mid April. (1)

The artillery shelling of Ypres by the Germans in mid April was intended as a diversion to draw the Allies' attention away from the German front line in the north of the Salient.

On Monday 19 April the one German 42cm (17 inch) howitzer joined in the bombardment, firing shells weighing 1, 719lb (816kg) each. The shells were fired in pairs and, according to the British Official History "travelled through the air with a noise like a runaway tramcar on badly laid rails". (3)

The huge 42cm howitzer had been developed since the 1890s by the German Army and the steel-making firm of Krupp. Originally developed as a coastal defence howitzer the design of the gun was modified by Krupp so that it could be dismantled and moved by road for use inland. Two of these mobile guns were built for the German Army and were used in Belgium and on the Russian Front in the First World War. The purpose of the gun was to demolish concrete fortifications, firing ten of its one-ton shells in an hour. Its maximum range was about 10 kilometres (6.2 miles). (4)

With the destructive capabilities of such a huge weapon, the demolition of the historic medieval town of Ypres began.

i'm not counting the 17cm version which is just a regular 17cm mortar placed on a flatbed car.

all other calibers were stationary (inluding the sometimes quoted 35cm gun from the Mackensen class battlecruiser, mounted on concrete) except the mobile Big Bertha and the 30,5cm german (which looked very much like the "Big Bertha". only 1 was ever buld) L/17 howitzer).

note that even the 38cm Max was usually lifted from the bogies and placed on a concrete foundation to archive a higher elevation of the barell.

Which calibers were used by the other allies ?

i'm not sure if the 520mm Schneider should count since it wasn't ready until after the war ended.

i didn't list anything below 20cm
there were also several other short-barelled guns mounted on a 2 axle railcar, but somehow i doubt their usefullness given the short range.
Top

About the numbers I have these ones (again numbers of RR guns constructed during the WW1 period but still available in 1940) :

no AFAIK the 520mm was ready only after the end of the war. oddly enough, the gun(s) was/were captured and used by the german army in ww2.

there must be more. France build 500+ railroad guns.
Top

Thanks, wow that much ! As I said I have only the figure of the guns still used in 1940.

characteristics according to Ferrard's book about French armament :

In the book it is written that in 1918 the ALVF (artillerie lourde sur voie ferrée) consisted of 548 pieces.
Many were reformed/destroyed after WW1. Between the 2 world wars Schneider developped a 240mm gun (L/51, 80km range, V°=1100m/s) but it was not mobilized in 1940.
The French RR guns were used by the Germans in Sevastopol, Leningrad and on the Atlantic wall.
Apparently the 520mm was completed during WW1 ... perhaps did he not see action ?

Turks had 210 and 280 mm guns in Gallipoli if I might add.
Krupp's 280 mm cannon. Almost the same cannons
(but older model) have been used in Seddulbahir, Kumkale, Rumeli Mecidiye and Anadolu Mecidiye Forts:

One of cannons in Rumeli Mecidiye Fort during the artillery exercises. The official Turkish historiography claims that
the picture has been taken on 18th March, 1915.
Notice the shell being lifted:

Krupp's 355/35 cannon form one of the Dardanelles forts on the exposition of the Military Museum at Harbiye in Istanbul:

I can inform you with a list of artillery(along with the deployments) in Gallipoli.
Best Regards!
Kaan
You do not have the required permissions to view the files attached to this post.
Last edited by Kaan Caglar on 16 Mar 2004 23:04, edited 1 time in total.
Top

Dead-cat, you were right about the 520mm gun ... I have found some info on a French website.

The first trials took place in Quiberon on July 1918, with two 520mm RR guns. One piece's barrel exploded without making wounded but it was out of use. The second 520mm gun could not see action before the armistice and was stored with 100 shells.
In 1940 the 520mm RR gun was in fact not mobilized, they were waiting an offensive against the Siegfried line (planned for 1941) and the production of more shells.

The Germans used this gun in Leningrad in 1942/1943, it has been captured by the Soviets and probably destroyed.