Discussions on all aspects of Imperial Germany not covered in the other sections.
7 posts • Page 1 of 1

I can recognize von Richtofen in the middle, but who are the other pilots?
Any idea of place and date?
Pic from CORBIS:
You do not have the required permissions to view the files attached to this post.
Top

From left to right:

Oberleutnant Wilhelm Reinhard, Jasta 6. Reinhard succeeded Rittmeister Manfred Freiherr von Richthofen to command of JG 1 upon that officer's death in action. Reinhard had been submitted for the Pour le Mérite, but died during the crash of a Zeppelin-Lindau D.I aircraft during trials at Aldershot airfield near Berlin on 3 July 1918. As a result, the Pour le Mérite was never approved. Oberleutnant Hermann Göring then took command of JG 1. Interestingly, Göring first flew the Zeppelin-Lindau D.I in question and, after landing, Reinhard took the plane up and crashed to his death. (Sounds very much like the ending of Jack Hunter's novel and the same-named movie The Blue Max!)

SOURCES: Kilduff, Peter. The Illustrated Red Baron: The Life and Times of Manfred von Richthofen. Arms and Armour, London, United Kingdom, 1999 (the same photo appears in this book); O’Connor, Neal W. Aviation Awards of Imperial Germany in World War I and the Men Who Earned Them – Volume II: Aviation Awards of the Kingdom of Prussia. Foundation of Aviation World War I, Princeton, New Jersey, 1990.
Top

Hi Shawn!
Many thanks for the names and the info. Very helpful.
Couldn't recognize Lothar even though I've seen several photos of him.

I understand that there was a third brother (von Richtofen) but he was too young during WWI. Did he join the military career before WWII started?
Best regards.

Shawn is correct on all of them, as his book has the photo

From left to right;
Kurt Wüsthoff:

After scoring 27 victories, Wüsthoff was captured on 17 June 1918. Overwhelmed by three S.E.5As and a Sopwith Dolphin, his Fokker D.VII was forced down near Cachy by members of 23 and 24 Squadrons. Sharing credit for the victory were Canadian ace George Johnson, English ace Ian McDonald, South African ace Horace Barton and C.E. Walton.

Reinhard entered the army in 1909. When the war began, he served with an artillery regiment on the Western Front. Badly wounded in November 1914, he did not return to the front until June 1915. After completing flight training, he was wounded for the second time in December 1915. Returning to duty in February 1916, he served with FA(A) 205 before being assigned to FA 28 in the Balkans. In 1917, Reinhard attended Jastaschule and was assigned to Jasta 11 on 24 June 1917. Scoring his first victory on the morning of 22 July 1917, he shot down English ace Geoffrey Cock over Warneton. On the morning of 4 September 1917, he was wounded in action for the third time. After recovering from his wounds, he assumed command of Jasta 6 on 26 November 1917. With the death of Manfred von Richthofen, Reinhard assumed command of JG 1 on 22 April 1918. In July 1918, he attended the aircraft trials near Adlersdorf. After Hermann Göring finished test flying a Zeppelin-Lindau D.I, Reinhard took it up for a test flight but was killed when a strut broke and the top wing collapsed.

Manfred Freiherr von Richthofen, no need his info me thinks..

The son of a doctor, Löwenhardt served with an infantry regiment before he volunteered for the German Air Force. After scoring his 54th victory, he collided with Leutnant Alfred Wenz of Jasta 11. Both men jumped from their planes but Löwenhardt was killed when his parachute failed to open. 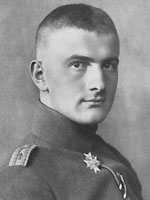 When the war began, Lothar von Richthofen was an officer in the cavalry. Following Manfred von Richthofen's example, he transferred to the German Air Force in 1915 and was assigned to Jasta 11 on 6 March 1917. Under the watchful eye of his older brother, Lothar scored 24 victories in 47 days and was credited with shooting down English ace Albert Ball on 7 May 1917. On 13 May 1917, Lothar was badly wounded in a dogfight with a B.E.2e but recovered and assumed command of Jasta 11 on 24 September 1917. Wounded again on 13 March 1918, he crash landed his Fokker DR.I after being shot down by Camel pilot Augustus Orlebar and B.F.2b crew Geoffrey Hughes and Hugh Claye. The following month, he was still in a hospital bed when he learned of his brother's death. In the summer of 1918, Lothar returned to duty and achieved ten more victories by the end of the war. Scoring his final victory on 12 August 1918, he shot down a Sopwith Camel flown by English ace John Summers. The following day, Lothar was seriously wounded for the third time when his Fokker D.VII was shot down over the Somme by a Sopwith Camel.

Also you asked about Wolfram von Richthofen,
Not their brother but Wolfram was Lothars and Manfreds cousin.

FREIHERR VON RICHTHOFEN, FIELD MARSHAL DR. WOLFRAM: Germany Third Reich. 1895-1945. As a military aviator, Wolfram Freiherr von Richthofen participated in a leadership role in two of the most important events in the shaping of World War II perceptions of the vulnerability of cities to air attack. As a Lieutenant Colonel and Chief of Staff of the Legion Condor he was responsible for the bombing of Guernica on 26 April 1937. Promoted to Colonel in Januray 1938, and to Major General in September 1938, he served as the Commander of 8th Fliegerkorps in the attack on Poland and was responsible for the application of lessons from the Spanish Civil War to the bombing of Warsaw. He subsequently commanded the 8th Fliegerkorps in the Battle of Britain. Von Richthofen clearly understood the integration of fighter, level bomber, and dive bomber aircraft in what today's air combat planners term strike packages, and was a pioneer in the use of concentrated, high tempo air operations against a single target. His successful concentration of air power provided an operational demonstration of the single massive attack scenario that drove civil defense planning of the 1920s and 1930s.

Freiherr von Richtofen's military career started in 1913 as a cavalry officer, with a transfer to aviation in 1918, qualification as a pilot, and achievement of 8 kills in air-to-air combat over the Western Front. From 1919-1922 he studied engineering at the University of Hanover, and in 1923 he rejoined the Reichswehr, serving in the 1920s in a number of positions associated with Germany's clandestine efforts to rebuild its military aviation, and then in technical positions on the Luftwaffe staff in the 1930s. After successful service in a variety of command positions in World War II and promotion to Field Marshal, Freiherr von Richtofen was transferred to the reserve in 1944 as a result of a cerebral tumor, and died in a prisoner of war camp in 1945.

Great pictures and info Kaan! Thank you very much.
Regarding Wolfram, I know about him. But I'm almost sure that Manfred and Lothar had a third brother. I don't remember his name though.
Thanks again.
Best regards.

Manfred's youngest brother was Karl Bolko Freiherr von Richthofen (born 16 April 1903 in Schweidnitz and died in 1971). He also had an older sister named Elisabeth Therese Luise Marie (always known as Ilse), who was born on 8 August 1890 in Breslau and died in 1963.

That's it! Bolko. Thanks for the info Shawn. Didn't know about Ilse. I thought they were only three brothers.
Thanks again.
Best regards.