The Aviator of Tsingtao is a new version of Gunther Plüschow's classic account of his eventful part in World War I. Originally titled Die Abenteuer des Fliegers von Tsingtau and appearing in English translation as My Escape from Donington Hall, Plüschow's tale chronicles his time as the lone pilot in Imperial Germany's colony of Tsingtau (Tsingtao in the English of the time, now called Qingdao). After war was declared he flew reconnaissance sorties above the territory, patching up his barely-airworthy Rumpler Taube each evening and evading the superior Japanese biplanes by day. 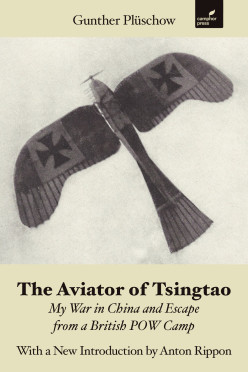 When the colony was about to fall he was ordered to keep the Taube out of Japanese hands and flew it to neutral China, where he crash-landed. An epic journey followed across China, the Pacific, the continental United States, and the Atlantic, before his capture by British authorities in Gibraltar. Transported to Britain and interned in the Donington Hall POW camp, Plüschow (who knew England well) became the only German in either World War to escape from Britain and make it all the way back to Germany.

This latest version features new photos, maps, and a new introduction by journalist Anton Rippon, the author of Gunther Plüschow: Airmen, Escaper and Explorer, the standard English-language biography on this remarkable man. The e-book is available from our website or from Amazon, with an introductory price of $1.99 until mid-April.
Top

Re: Gunther Plüschow's book reissued with a new intro

I have a original copy I picked up in1988 in Wiesbaden in a bookstore run by a gentleman from Kearney- Nebraska,..small world,it is an amazing read,glad to see it re-printed.
Top
2 posts • Page 1 of 1