Searching for a photo

Discussions on all aspects of Italy under Fascism from the March on Rome to the end of the war.
8 posts • Page 1 of 1

Searching for a photo

I've become very interested in the provenance of the following photo, allegedly taken during the ARMIR's retreat during Operation Little Saturn: 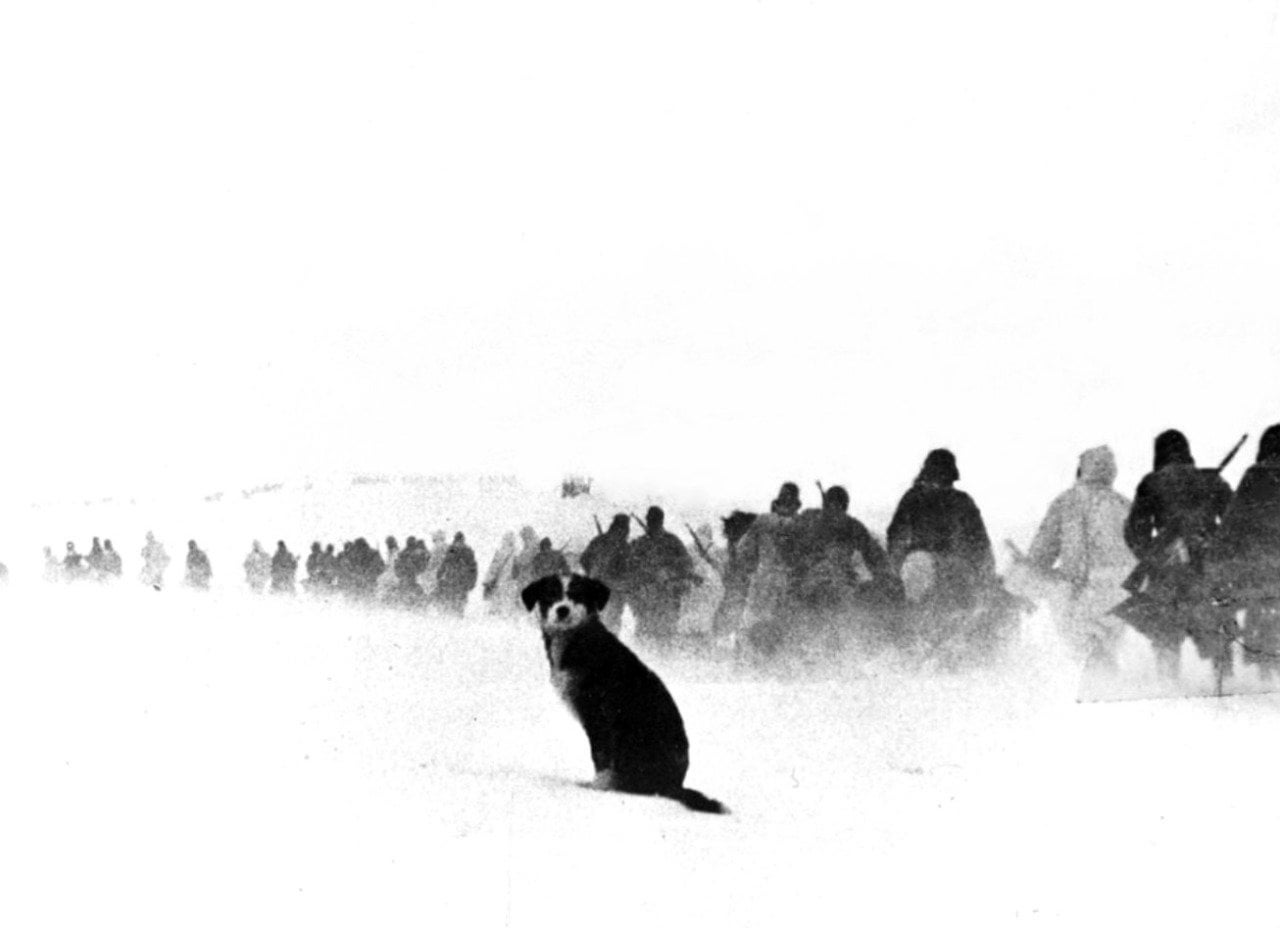 Some Italian sources I know have indicated that the soldiers depicted are actually from Vincenza Division, which was a security division attached to the Alpini Corps, and shared their fate, smashed during the latter stages of Saturn. That would place this photo sometime in January 1943. Some versions of the photo seem to have a halftone pattern, which would indicate that it was taken from a book of some sort. I'd love to know the author, and when it was published, because I am seeking photographic rights for usage in an upcoming book of my own. Any leads or further commentary on where an archival quality photo might be found, or leads to a better quality image than the ones floating around out there, would be gratefully received. Thanks in advance!

I am sorry I can't help, but out of curiosity, if I may, what will be the subject of the book? I found Shattered Sword extremely interesting.
http://invasionofsicily.blogspot.com/
Top

Thanks for the kind words on Shattered Sword--much appreciated! The next book is a history of 1942, all fronts, basically talking about how the Allies turned around their respective train wrecks that year. It's an operational-level narrative, going month-by-month, from December '41 to December '42. Each chapter starts with a photo and a little mini-essay. This is the photo I want to use for December '42, in that it is emblematic of the larger defeat being inflicted on the Axis powers during that month. There's just something about the dog that really brings out the pathos of the scene for me, particularly when juxtaposed with the Italians, who were so ill-prepared for what hit 'em. You look at that column of men--odds are not many of them ever made it back to Italy. It's just a really interesting photo.

If they really were from the "Vicenza" (named after a town in Veneto, without "n") less than one in four made it back, of 10,466 soldiers in this division 7,760 were killed or missing in the retreat.
http://invasionofsicily.blogspot.com/
Top

Thanks for the correction on spelling--quite right!

Using TinEye, I was able to determine that the first posting of this image on the Web was (intriguingly enough) a Russian travel blog in 2015. The posting and image have since been removed. My current working hypothesis is that this image was taken by an Italian soldier who was then captured or killed, and the image then subsequently published in Russia. I've put in an inquiry into RIA NOVOSTI's successor organization (that has a large photo archive), but no response yet. It's a fascinating mystery.
Top

That's a fascinating clue, and I will try to hunt it down. Thank you!
Top

Mystery solved. I posted this question to a Russian-language forum, and got an answer back immediately. This photo isn't what I thought it was. It does not depict Italian soldiers retreating from Operation Little Saturn. Instead, the image originally appeared in the German magazine "Wehrmacht," (the official propaganda magazine of OKW) on 11 March, 1942. You can find the archived copy of it here:

The translation for the caption under the dog photo is:
"A snowstorm races across the snowy expanse of the east. Strong German formations took part in the first major encirclement of this winter battle. In a wide arc, infantry encircles the kettle in which an entire soviet army is located."

The translation for the photo below that, of soldiers lying in the snow, is:
"The tongs close around the kettle ever closer. The lead infantry has encountered enemy resistance from the north and is now digging itself into the deep snow for the time being until strong forces have been drawn up."

The translation for the main article is:
"No people have any more right to celebrate their heroes than the Germans!
For the third time in this war, the German people commemorates their heroes on the day of freedom of defense. The word that the Fuhrer uttered in his speech on the Heroes' Remembrance Day in 1940, 'No people have any more right to celebrate their heroes than the Germans', is more valid today than ever before. In tough battles, the front in the east fends off an opponent who uses his last energies to dispute our victories from the previous year. If today it can be established that the great winter offensive of the Soviet Army has failed and that, despite the ruthless use of people and materials, the Soviets only managed to achieve good results but not to force strategic decisions, the German people would like to thank their soldiers for this in the East and above all those who gave their lives for the security and freedom of the Reich; In the hard battles of this winter, of which our pictures on these pages show a small excerpt, they created the conditions for the destruction of the enemy and the final victory.

In a summary report, the Wehrmacht High Command reported that between January 1 and February 20, 1942, 56,806 prisoners were brought in on the Eastern Front, and that the bloody losses of dead and injured are many times this number. In the same time 960 tanks, 1789 self-propelled guns, and 1189 aircraft were destroyed or captured.
These figures show the hardness of the winter fight on the one hand, but they also show the unbroken fighting strength of our troops, who fought this winter battle under the most difficult and unfamiliar weather conditions.
At the beginning of the spring, instead of a success, the Soviets were confronted with huge losses, which further reduced their combat strength, which had already been weakened in the summer campaign of 1941."
Top
8 posts • Page 1 of 1