Discussions on High Command, strategy and the Armed Forces (Wehrmacht) in general.
79 posts

It's been a long time since I was even remotely interested in this and, frustratingly, descriptions on Tinternet and the photographs relating to his visits to Warsaw are very coy on dates. It would appear there was more than one visit.

There is a district of Wola in Warsaw (11/9) but Wola is a very popular place name in Poland ( I am guessing after the old-German word for a well - hence, no doubt, its popularity) so this is not very helpful. The only other place-name I can relate positively is Glinki (22/9 - now Marysin Wawerski). AH was photographed observing the fighting in Praga (a Warsaw district on the right - eastern - bank of the Wisla. Often also, traditionally, used to describe the entire right-bank half of Warsaw) through a scissor scope from the Glinki church steeple.

Given the hordes of people interested in the guy and thousands of books seemingly relating every time he passed wind, I am surprised how difficult it is to find this info - perhaps I am looking in the wrong places.

Probably worth adding, though not strictly 'at the front', that AH also had another close call in Warsaw when he returned on 5th October for the victory parade (somewhat premature, as fighting was still ongoing). He was to be given the half-tonne TNT treatment but German security measures disrupted the observation network that had been set up and the man with the igniter could not be sure where his target was among the fast-moving motorcade. He therefore hesitated and the moment passed by. The Germans discovered the mine a few days later and, perhaps for this reason, AH never visited Warsaw again.
Top

This seems rather improbable, given the short time scale, the fact that German troops were presumably swarming all over the city and one imagines no advance warning of Hitler's visit or route was given.

And if Hitler could not be identified, why wasn't it detonated under some other worthwhile target?

What is the hard evidence for this?

This is well documented, not least because the man responsible for ordering the attempt, gen Michal Karaszewicz-Tokarzewski (a man with a very knotted life history, even by Polish standards), survived the war and gave a number of detailed accounts. Lt Zelazko who delivered the explosives left a detailed account of the preparations. To a lesser extent other survivors such as mjr Franciszek Niepokólczycki (in command of the operation), gave reports to their superiors which are now lost and known only from second-hand accounts. I would not be at all surprised if there are German documents referring to this event (the mines were discovered on the very same day during the post-parade clean-up) but have no idea whether anyone has mined (pun intended) the German archives for this information.

Re the time factor, the Sluzba Zwyciestwa Polski (SZP - Polish Victory Service), the origin of the AK came into being on 27 September on the day the Warsaw surrender talks commenced. The assassination attempt was its first act, albeit preparations had begun even earlier, with the explosives being delivered on 25 September. According to MKT, the SZP planners had (correctly) assumed AH would come to lord it over Warsaw and the place chosen (the Aleje Jerozolimskie and Nowy Swiat crossroads) was virtually unavoidable for any official delegation (London is out of all proportion a larger place but, even so. you probably wouldn't lose a bet if you prophesied that a victorious tyrant would chose to drive up Whitehall!). The job was made simpler because a barricade on the crossroads was in the process of being dismantled (in accordance with surrender conditions!) which tended to camouflage any suspicious activity by Polish army engineers. Off course most of the heavy lifting had been completed by the time the first German units entered Warsaw on the evening of 30th September and the operation was fully ready by 4th October. Thereafter the 'installation' was staffed constantly, in civilian clothes by then of course.

There are conflicting accounts of why the mine failed to explode. However, on balance, the most likely explanation is that the observer network was pushed back on the day by German security measures and maj Franciszek Niepokolczycki was unable to reach the command centre. There was, of course, an officer on site, but he had been given strict orders to fire only if there was 'no shadow of a doubt' that AH was in range. There was, so he didn't.

I believe the most detailed account of the operation in English can be found in Roger Moorhouse's Killing Hitler (2007).
Last edited by gebhk on 19 Mar 2020 12:41, edited 2 times in total.
Top

In a perfect world I would think that meds and lights move up, spot and anchor the reds to their position. Then the heavies move up and establish the front line allowing the meds/lights to relocate and flank. With TD covering all. That would be a perfect world, this is Blitz.....
<small>f.o.r.c.e. gmbh porsche original parts germany</small>
Top

And if Hitler could not be identified, why wasn't it detonated under some other worthwhile target?

After the war MKT suggested that only the successful assassination of Hitler made the inevitable wave of bloody reprisals on the population worthwhile (for example, in accordance with the surrender document, 12 city 'fathers' were being held as hostages to assure 'good behaviour' of the population). In short, other than AH, there were no worthwhile targets that justified the likely cost. While there is, no doubt, some post hoc rationalisation in this, the underlying argument is reasonable. Indeed, there are strong arguments that even the assassination of AH would have made little difference to the course of the war while, without doubt, a massive orgy of murder and destruction would have been unleashed on the hapless population of Poland.

As an aside, MKT - who was unaware (for reasons of operational security) of the precise details of the mine, was apparently holding a meeting with senior political and military leaders in an adjacent building. They became trapped there when the German security operation closed down all areas adjacent to Hitler's route. Had the mine been exploded, the entire senior leadership of the nascent Polish underground state would have likely been killed alongside AH, putting a severe crimp in the development of the resistance movement!
Top

Thanks for providing fuller context. It seems to be well documented.

Such operations were possible. In Odessa the Red Army set up a one-week, delayed action bomb in the cellars of the most prominent public building before it retreated on 16 October 1941, on the assumption that it would be used as some sort of headquarters by the Romanians. They were right and dozens of Romanians were killed.

P.S. Wikipedia gives a slightly different version of the incident: "On October 22, 1941, in the building of the NKVD on the Marazlievskaya street where the Romanian military commander's office and the headquarters of the Romanian 10th Infantry Division had settled to occupy the city, a radio-controlled mine exploded. The mine had been planted there by the sappers of the Red Army even before the surrender of the city by Soviet troops. The building collapsed, and under its rubble, 67 people were killed, including 16 officers, among whom was the military commander of the city, Romanian General Ioan Glogojeanu. Responsibility for the explosion was placed on the Jews and Communists."

A major pogrom against the Jews resulted.

The first visit to the Eastern Front was with Benito Mussolini, the Italian fascist leader, in August 1941 when the two dictators flew to Brest-Litovsk to inspect the troops and the site.
Source: https://radikal.ru/lfp/i061.radikal.ru/ ... 24.jpg/htm
https://www.reddit.com/r/HistoryPorn/co ... the_brest/
Cheers. Raúl M

I am not sure how much a visit to Brest-Litovsk in August 1941 counts as a "visit to the front". The fortress had fallen a month before and the front was many hundreds of kilometers to the east by then.

; yes is true........but some sources tells that still the day before the German chased the last defender. Who knows? Cheers. Raúl M 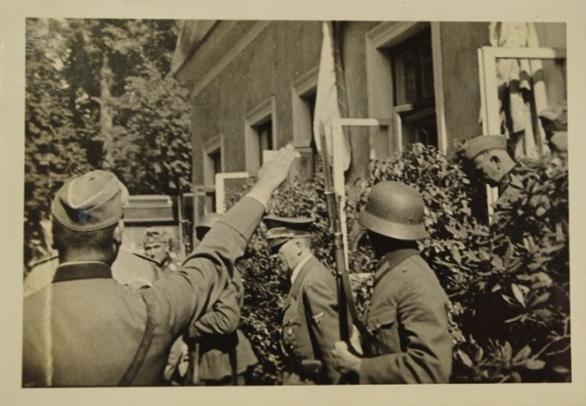 Hi! I don't know whether it is reasonable to write about this after six years have already passed but I do believe you got this location wrong. I am fairly sure it was made in Końskie, very next to the west side of park's palace. That's actually my birth place so I know this park pretty well and I definitely recognize palace's facade. Also, you can compare that photo to this one below (which was correctly named AH in Konskie) and you'll discover both pictures were made in the same place but they were taken from different angles. 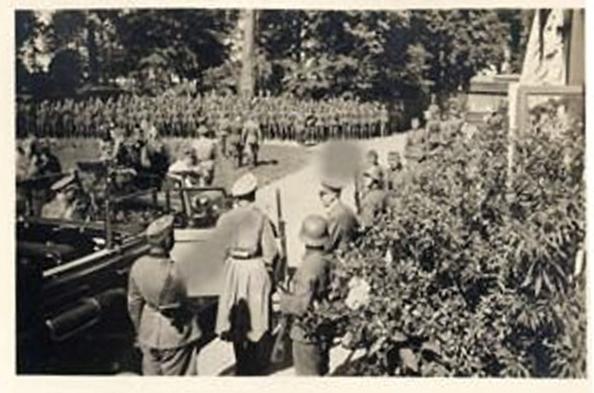 No problem about the time...to learn, yes it seems you've right.....Thanks for your input

In the first days of June 1940 (1st and 2nd) the Führer paid a visit to Belgium and the north of France to visit the battlefields (of that time and of the WWI) and learn about the development of the actions. ...
Source: https://wartimeline.com/westfront-illus ... -1940.html
Cheers. Raúl M

Visit to Konskie and Kielce.

A former colleague I worked with was from Konskie. His grandfather remembered the day with Hitler drove through the town and I was shown that very photo you used plus another one from another angle.

Interesting thread, thanks for the information.
Top

; thanks for joining here and the interesting comment about that visit