Discussions on High Command, strategy and the Armed Forces (Wehrmacht) in general.
38 posts

One of the 325 million Americans laughs in this thread. Maybe you are colored? Well, this is fate. Not you, anyone who reads. My thoughts in detail are different, consistent with the general line of American history!


The Rise and Fall of the Third Reich

On July 29 Guderian warned all General Staff officers that henceforth they must take the lead in
being good Nazis, loyal and true to the Leader.
Every General Staff officer must be a National Socialist officer-leader not only … by his
model attitude toward political questions but by actively co-operating in the political
indoctrination of younger commanders in accordance with the tenets of the Fuehrer …
In judging and selecting General Staff officers, superiors should place traits of character
and spirit above the mind. A rascal may be ever so cunning but in the hour of need he will
nevertheless fail because he is a rascal.
I expect every General Staff officer immediately to declare himself a convert or adherent
to my views and to make an announcement to that effect in public. Anyone unable to do so
should apply for his removal from the General Staff.*
So far as is known no one applied.
With this, comments a German military historian, “the story of the General Staff as an autonomous
entity may be said to have come to an end.” This elite group, founded by Scharnhorst and Gneisenau
and built up by Moltke to be the pillar of the nation, which had ruled Germany during the First World
War, dominated the Weimar Republic and forced even Hitler to destroy the S.A. and murder its leader
when they stood in its way, had been reduced in the summer of 1944 to a pathetic body of fawning,
frightened men. There was to be no more opposition to Hitler, not even any criticism of him. The
once mighty Army, like every other institution in the Third Reich, would go down with him, its
leaders too benumbed now, too lacking in the courage which the handful of conspirators alone had
shown, to raise their voices—let alone do anything—to stay the hand of the one man who they by now
fully realized was leading them and the German people rapidly to the most awful catastrophe in the
history of their beloved Fatherland.
This paralysis of the mind and will of grown-up men, raised as Christians, supposedly disciplined in
the old virtues, boasting of their code of honor, courageous in the face of death on the battlefield, is
astonishing, though perhaps it can be grasped if one remembers the course of German history,
outlined in an earlier chapter, which made blind obedience to temporal rulers the highest virtue of
Germanic man and put a premium on servility. By now the generals knew the evil of the man before
whom they groveled.

I believe that after the Soviet winter offensive beginning on 10-1-'42, the Germans were no longer 150 km from Moscow. As to why the Germans didn't take Moscow at that time, I'd opine that the Soviets had a say in the outcome.
Top

Gorque wrote:
I believe that after the Soviet winter offensive beginning on 10-1-'42, the Germans were no longer 150 km from Moscow. As to why the Germans didn't take Moscow at that time, I'd opine that the Soviets had a say in the outcome.

150 km closest to Moscow, German positions were held until March 1943. 228 thousand frost-bitten Germans lost 41/42 winter. The army's unpreparedness for war in the winter caused problems. More harm from the order of Hitler to cling to the territory. Did not allow the Germans to regroup and inflict a counterblow, after eliminating the initial inconveniences with the climate.

One of the 325 million Americans laughs in this thread. Maybe you are colored?

Mind your tone in posting. AHF doesn't permit racist or anti-national slurs. If you meant something else, pay more attention to your words.
Top

Is this supposed to be one of the 9.47 million Belorussian laughs in this thread?

The Americans are 200 km from Moscow on April 12, 1945. Why did not they take Berlin? Eisenhower led the army on April 12. This is not mere coincidence.
"Is all this pretentious pseudo intellectual citing of sources REALLY necessary? It gets in the way of a good, spirited debate, destroys the cadence." POD, 6 October 2018
Top

Is this supposed to be one of the 9.47 million Belorussian laughs in this thread?

The Americans are 200 km from Moscow on April 12, 1945. Why did not they take Berlin? Eisenhower led the army on April 12. This is not mere coincidence.

Such attempts to marginalize my posts. We have normal participants, work with documents, and that writes nonsense.
And there is no logic. 2 of 3 army groups in 1942 did not conduct combat operations. 70% of the Wehrmacht remained idle. Therefore, any comparison with Eisenhower in April 1945 is not appropriate.
Top

Richard Anderson, You are a Scientist.

Work further and do not disturb others.

Army Group North fought a defensive war from 1942 south of Leningrad including battles around Demyansk and Kholm, and which saw 16th and 18th armies fight off several Soviet offensives and other operations.

How can we in light of your RESEARCH (and attached annotated map) account for this ? war in an area you state has no war.....
Top

doogal wrote:Army Group North fought a defensive war from 1942 south of Leningrad including battles around Demyansk and Kholm, and which saw 16th and 18th armies fight off several Soviet offensives and other operations.

How can we in light of your RESEARCH (and attached annotated map) account for this ? war in an area you state has no war.....

Defensive war is not serious. The population of the USSR is 200 million, of which men at the age of 14-50 are 50 million. How many Russians need to be killed to win the war? Such a war without German influence is called the abandonment of initiative in operations. Enormous forces fought back from the Russians, as from annoying flies.


To surround and take prisoner the right war. All the rest was thought up by Germans. 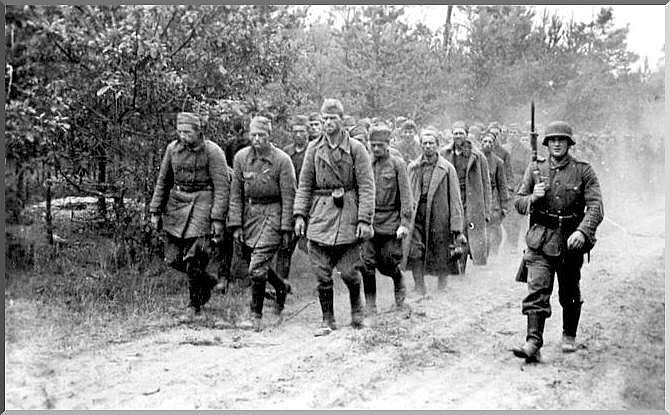 The principle of gravitation is applicable to drawing up of an individual opinion on the events taking place.

The more people hold any opinion, the more the influence of public opinion on the individual. It is psychologically difficult to oppose one's opinion to the whole state with 80 million people residing in it. The plans of the Germans for 1942 are meaningless, but millions of people are involved in this, they did not object, so this makes sense. The fundamental principles are being questioned. To say that in the events of 1942 there was no point, while Germany and 80 million people reacted to everything as a normal course of history. It's like doubting the reality of the sun. It shines, and someone says it does not. Most do not even realize that events taken for granted are in fact nonsense. Exactly what 80 million people have such an opinion, do not have enough imagination to present that everyone as one was mistaken.
Top

I think this is the main problem when considering the Second World War. People lack the courage and imagination to question the choice of the whole state. Whose opinion is stronger, mine or Germany !?

Criticism of the "Barbarossa" plan is met, but only in the context of underestimation of the enemy. Action on a national scale by definition makes sense. We are told a military plan - so it is. The fact that the plan itself was devoid of military meaning, the state is not capable of such. To enter into a war without a plan. "Barbarossa" is not a military plan, it is nonsense.
Top

This is poetry. Killed in the forest by a sniper, bleed from the cold and marching ... Try to still read, for example, Halder's diary, about the differences between Hitler and the generals. If it were not for Hitler's intervention, the offensive against Moscow would begin in July, which allowed the Germans to safely avoid the influence of climate on the course of hostilities. Bagration, Vistula-Oder, there are also problems at the macro level.