Discussions on the role played by and situation of women in the Third Reich not covered in the other sections. Hosted by Vikki.
2197 posts

This thread is one of the most amazing things I have found on the internet yet. Thanks to all involved, amazing to follow the thread!
For what its worth my two thoughts:
I think it could be that the LGG is in fact Lore Vogt. This thought was brought up in this forum but not really discussed more as a conflict broke out if it is moraly wrong to search for the name.
A) The women in the photo of the jutta rüdiger book is looking very similar to the LGG. Its hard to tell but should be comparef further. The story Lore Vogt tells about her wartime experiences also would make sense for the LGG and sadly also being raped by US soldiers makes sense given the impression stated by some that Hagelund filmed her in a sexualised way..
B) Many wondered why she was not recognised yet. Lore Vogt died on December 31st 1947. That date seems to me (given her age) plausible as a date for a possible suicide. Given the LGG died in 1947 its very likely she didn‘t have kids who could recognise her.
Also if her family was german and living in Czech it could be very likely that they were all Nazis. It could be possible the whole family was killed during and after the war by war, postwar communism, czech rage or suicide.

I know this is all highly speculative, but seen from a more psychological standpoint its a possibility.
Who came up with Lore Bauer by the way?
Lore is not a that common way, i find it to be interesting that theres a Lore Bauer and Lore Vogt.

I will try to find out more about Lore Vogt, maybe we can find a better photo of her!
Top

On page 81 the subtitle off the photo says: Lore Vogt in the raw who is standing, in the middle.

But she is not the girl with the most similarities (the other two girls who where discussed there).
Top

I agree with frank 101. The girl in the second row , in the middle , looking to her left , mouth open ( laughing ? talking ? ) has the closest similarity, specially her hair. Unfortunately a frontal photo is needed to compare it with the LGG caption assuring a minimum degree of precision. The SS Alarm Flak Abteilung Prag is still my choice as the unit she belonged to. I know it may be considered a shot in the dark but I would follow a single line of investigation until it is completely finished. I read somewhere that women from this unit were liberated from US POW camps in late november while other German women were liberated in June because they were wrongly suspected to have some association with the SS besides the fact they were clearly Luftwaffe.

Hi,
There has been an ongoing discussion since 7 years on axishistoryforum.com but the only thing that's certain is the location. It was filmed by an american soldier in a small village called 'Ejpovice' 10km away from 'Pilsen' near the czech border.

There's a longer video on youtube where you can see several dead SS-Soldiers laying on the ground after being beaten by the czech mob. She has a swollen left eye which is rumored to be from being raped. There's not really much solid evidence about her identity, just a bit about her alleged role in the wehrmacht as in job, rank etc..

Now a disclaimer from my side; If you watch the footage from the american GI you'll maybe notice the voyeuristic vibe while he's filming her. Most of the interest she generated probally came from her being an attractive colorized and beaten up WW2 woman. I'm not sure why I'm explaining my curiosity with this person but she just caught my interest and I can't let go. I'm genuinley interested who she was, what happened to her and how her life turned out.
Top

hello forum
I continue to watch the videos looking for indications of where LGG appears, the truth is that with the material found on the network it is not much, in the large group of German soldiers who enter Rokycany you can see another woman accompanying the group, it is the second woman that I see and show in another thread, does not look like LGG (in that shot you see a dirty German soldier and then already in neat Pilzen) her face is wider although her hair is up to her shoulders and she seems more stature, I continue to see and try to find where the largest group is separated from the minor since it is in this group I think LGG was
regards

German DW documentary on rapes during conflicts, LGG images appear but unfortunately there is no data from it and they are the known images
https://youtu.be/eQLMQ2Q9_I8 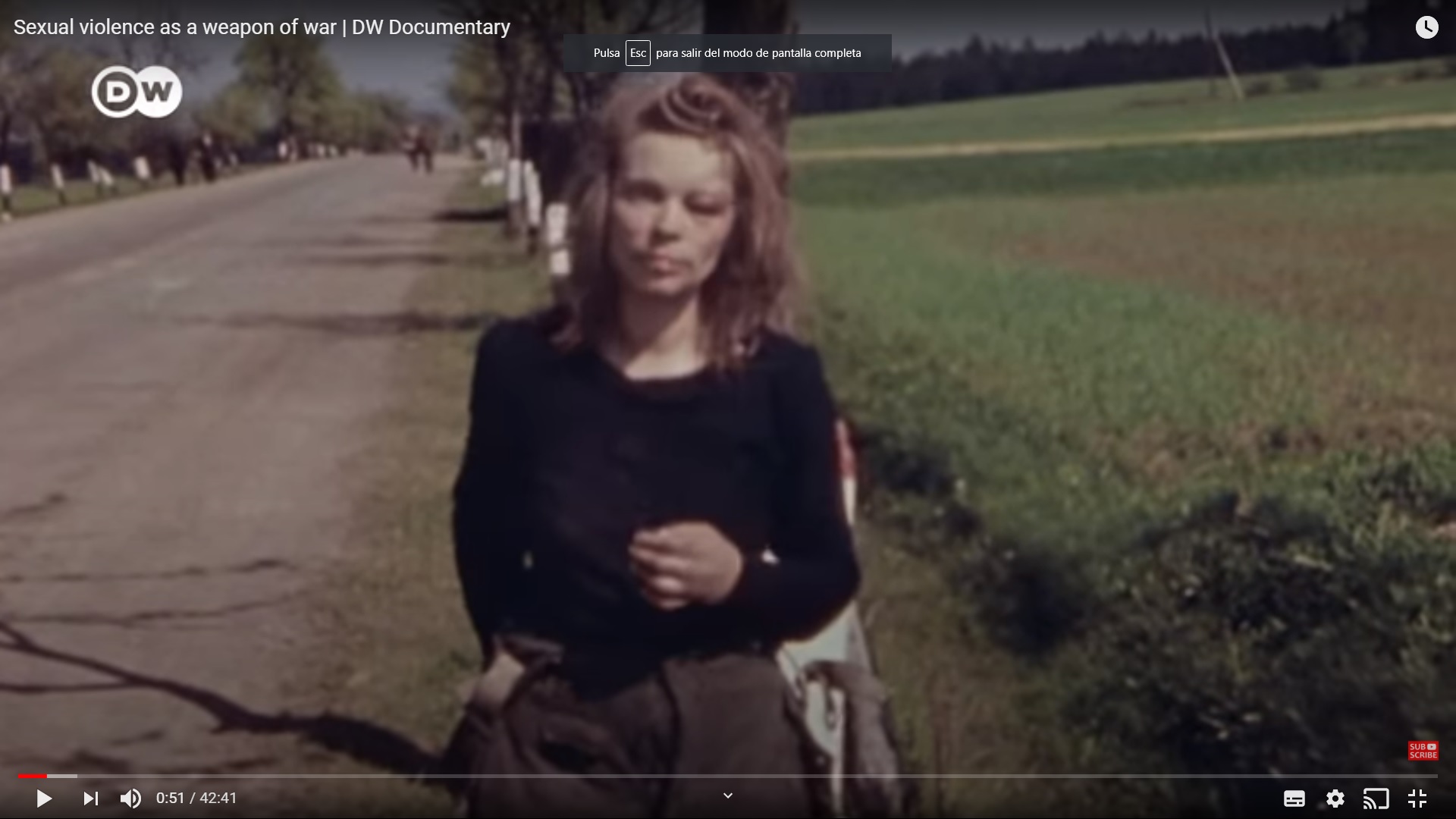 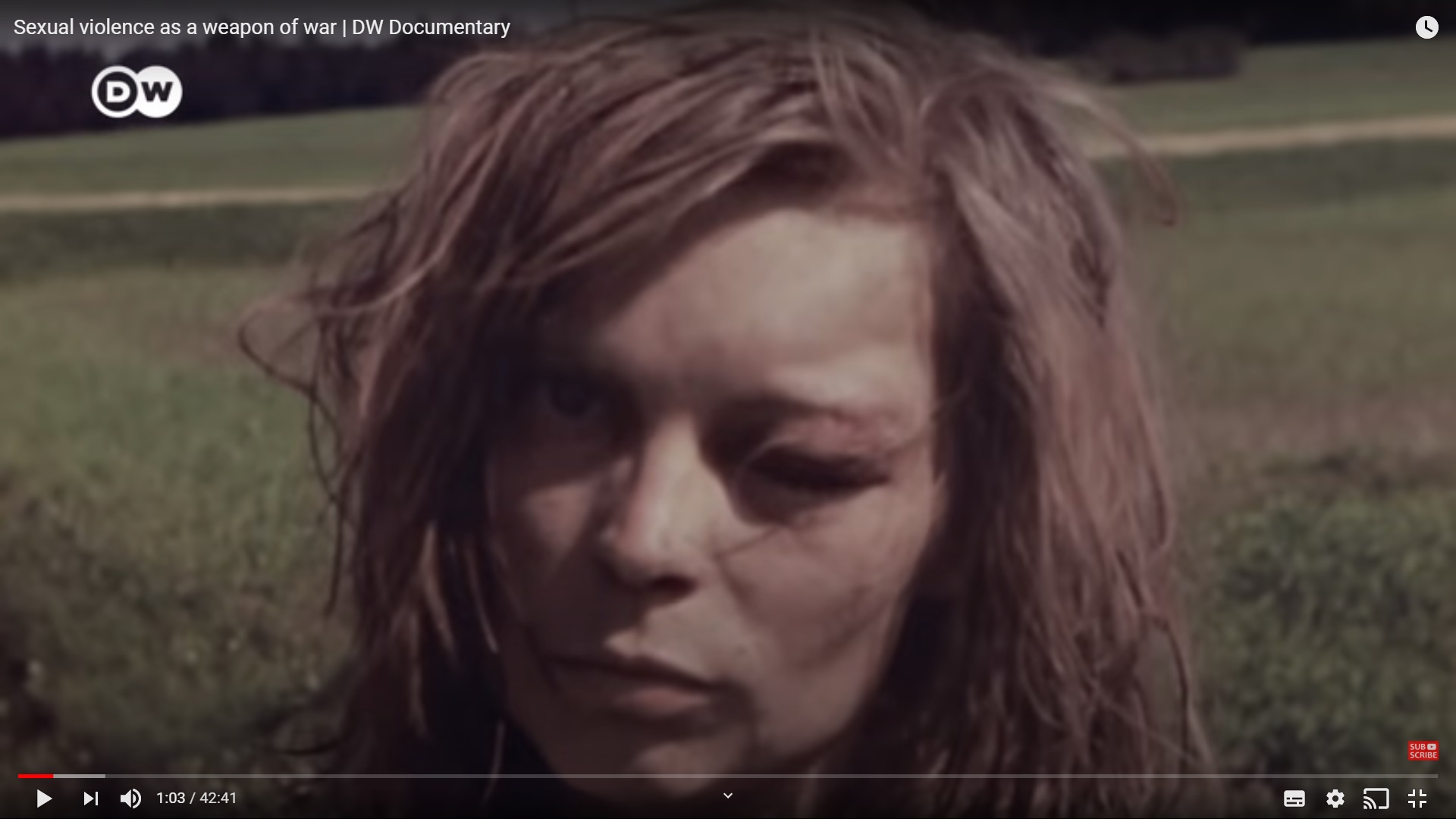