Discussions on the role played by and situation of women in the Third Reich not covered in the other sections. Hosted by Vikki.
13 posts • Page 1 of 1

Hello, I'm curious if anyone has photos of Arno Brecker's wife?

She was a Greek model.

I'm also curious if anyone has any information about her; she doesn't seem to have been a very nice person:

Karl Wolff: I've always liked Frau SPEER. She always stood beside her husband, and had five children. The wife of ARNO BRECKER, the well-known sculptor, was quite impossible.
Top

Thank you for the informative link.

I have searched the Internet for a photo of her. I haven't been able to find one. Surprising.
Top 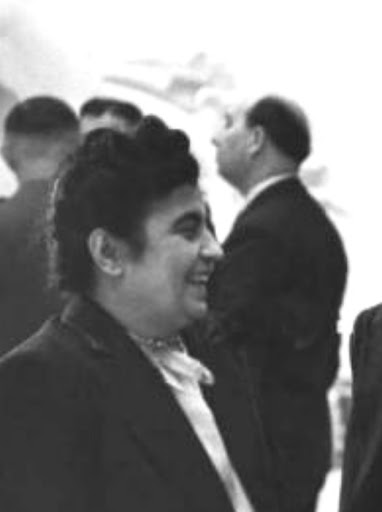 Does anyone have any biographical information on her? I'm curious about her personality.

Could anyone recommend a biography of Arno Breker?
Top

Demetra Messala was a Greek woman, married to Arno Breker, one of the most famous sculptors of the XX century and best known for being the favourite sculptor of Adolf Hitler and Albert Speer and for his prolific career during National Socialist Germany.

Breker first met Demetra Messala in Paris, which at that time was the “center of modern sculpture”. There Breker not only had the opportunity to meet a number of extraordinary individuals including Jean Cocteau and Alfred Flechtheim, among others, but also his future wife, of whom he would make a sculpture in 1933. Demetra, the daughter of a Greek diplomat in Paris, had been a model who used to pose for prominent artists such as Picasso and Aristide Maillol – the latter would later describe Breker as “Germany’s Michelangelo”.

Later on, Demetra Messala stopped her model career to pursue a career as an art merchant. In 1934, Messala and Breker moved to Germany, where the latter would eventually become the Nazis’ favourite sculptor, as his works represented the antithesis of so-called “degenerate art”.

Before gaining the affection of Hitler, however, Breker had to undergo adversities, as it was difficult for him to gain a foothold in the Reich’s capital city under the new conditions which existed there. After 7 years abroad, Breker was called “the Frenchman” and was looked down as non-meritory. Adversities included paradoxes such as being accused by Alfred Rosenberg (the editor of the Nazi newspaper Völkischer Beobachter) of being a degenerate artist (!), or his wife Demetra being suspected of being Jewish (!). Despite these handicaps, because Demetra Messala had by then become a succesful international art dealer and because she belonged to a Greek well-to-do family, the couple had little financial concerns.

From 1936 onwards, the situation improved as Breker and Messala began to enjoy the privileges of being affiliates of top Nazi leaders. Breker was appointed professor of sculpture at the College for Educational Arts in Berlin, and the couple lived comfortably in a large house 75 km East of Berlin. They attended the most exclusive events in Nazi Germany, and were seen in intimate company of Hitler at his private parties in a number of occasions, including at Hitler’s hideout in Berchtesgaden.

However, things would be slighlty different after the Nazi defeat in 1945. After the German downfall, the Americans identified Arno and Demetra, but were not prosecuted heavily. They only intended to let the denazification board examine thier record and determine their fate. The Americans merely kept an eye on them and helped them move north to the town of Wemding near NÃ¶rdlingen in October 1945. They were given a thirteen-room house, a luxury at a time when space was extremely precious. Demetra Messala was also able to purcahse an automobile, a really prized object in the Allies-occupied Germany. Later on, in a June 1946 letter, Messala would defend the acquisition as being “for the procurement of materials, like plaster, clay, stone samples, and tools”.

In any case, in an area flooded with homeless refugees, Arno and Demetra enjoyed privileged provisions, and in fact Breker’s work was mostly not interrumped through the culmination of the war and the ensuing persecution of former Nazi firstliners.

Demetra Messala would die in a car accident in 1956, but his husband would not die until 1991, at age 91. Despite being stigmatized for his public works in the Nazi regime, he never stopped getting work requests. In 1978, Breker was elected by the Greek government to produce a 10-meters tall sculpture of Alexander the Great, intended to be located in Greece, the country that inspired his art.
Sota ei päätä kuka on oikeassa, vain sen että kuka on jäljellä.
War does not decide who is right but only those who are left.
Top

Looking pictures of Demetra and alleged sculpture of her by Arno, that is love, and / or Arno was a genius as esculptor
Top

Germany, 29 March 1981, Arno Brecker, the sculptor of Hitler, at his home in Lohausen, near Düsseldorf, on the occasion of the exhibition 'Paris-Paris' Centre Georges Pompidou presents some works of German sculptor. In the library, Arno Brecker, with his wife, Charlotte Kluge, and her children, Gerhard (21 years) and Carola (18 years).
You do not have the required permissions to view the files attached to this post.
Sota ei päätä kuka on oikeassa, vain sen että kuka on jäljellä.
War does not decide who is right but only those who are left.
Top

I’am Demetra’s Messala Brecker sister’s granddaughter. When Demetra (Mimina) met Arno Brecker he wasn’t a famous sculpture yet. She born in Zante island in Greece and her father died (drowned) when she was a young girl. With her mother sisters and brother went to Athens where she stayed until she went to Paris with her first husband who was French. An historian told me that during the war she supported many orphan children and because of her influence she managed to save many Greeks who were in prison, among them there was a famous Greek writer, Elias Venezis who after his release from prison wrote his famous novel Block C.
Attached photo. Demetra is the one on top left standing
You do not have the required permissions to view the files attached to this post.
Top

Thanks elenich: beautiful photograph. Your intervention is essential to get to know this great woman.
Under the photograph where Demeter rests.

Photo: The grave of Demetra Breker at the Nordfriedhof, Düsseldorf.
You do not have the required permissions to view the files attached to this post.
Sota ei päätä kuka on oikeassa, vain sen että kuka on jäljellä.
War does not decide who is right but only those who are left.
Top
13 posts • Page 1 of 1