Discussions on the role played by and situation of women in the Third Reich not covered in the other sections. Hosted by Vikki.
2536 posts

It was the end of the worst conflict the world has ever known.
These and the other the film footage from the end of the war are historically significant.
What did ordinary people that lived through it have to say? These would be very candid conversations between people that had no idea anyone would ever know what they said. The complete opposite of an interview by a journalist that is asking leading questions.
This was more than just the routine day-to-day events during the war. It was over and they were still alive.
It would be just as significant if not more than than They Shall Not Grow Old.

77 years after the filming of LGG, unfortunately I have not found more information about it, only a drawing and pixel art
Cheers 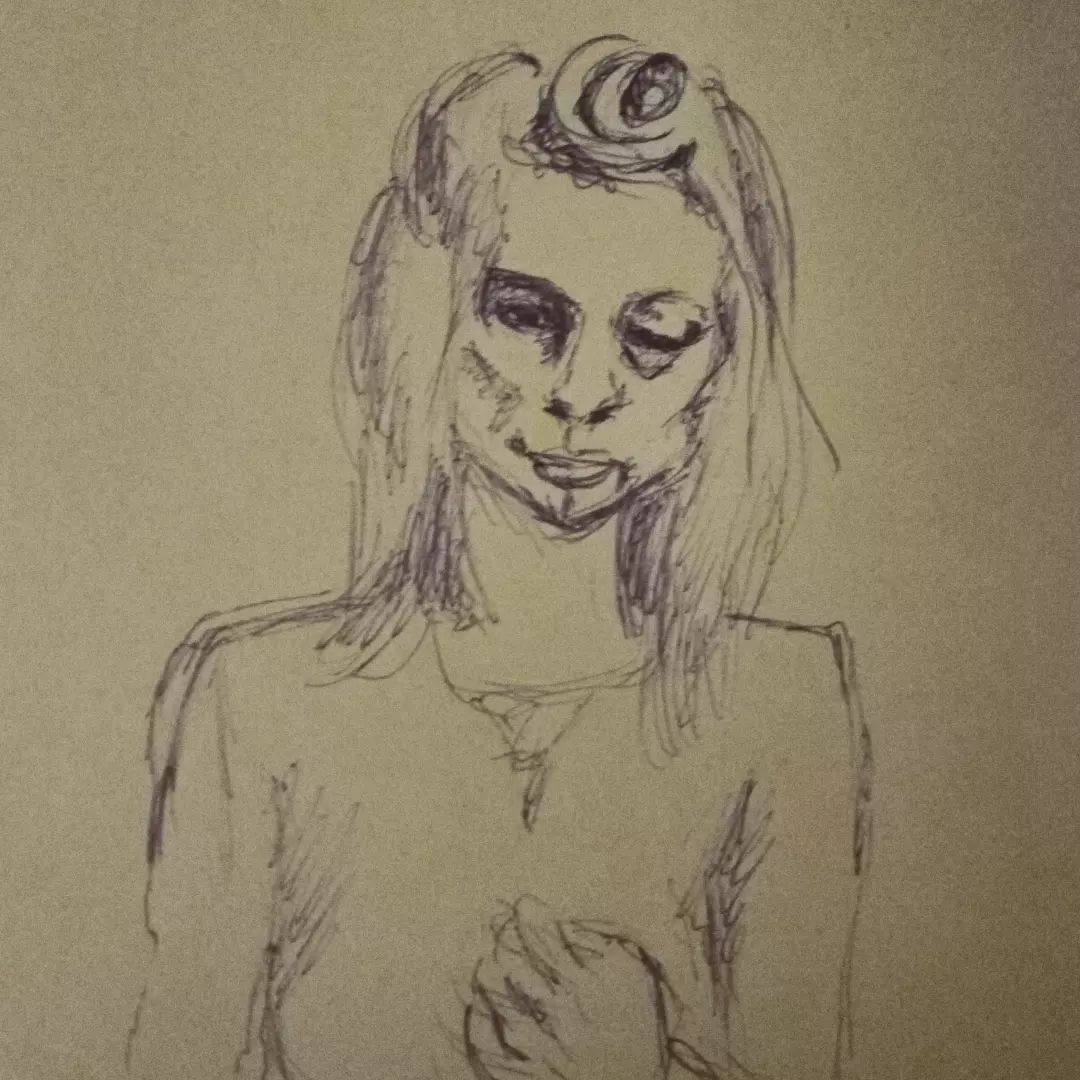 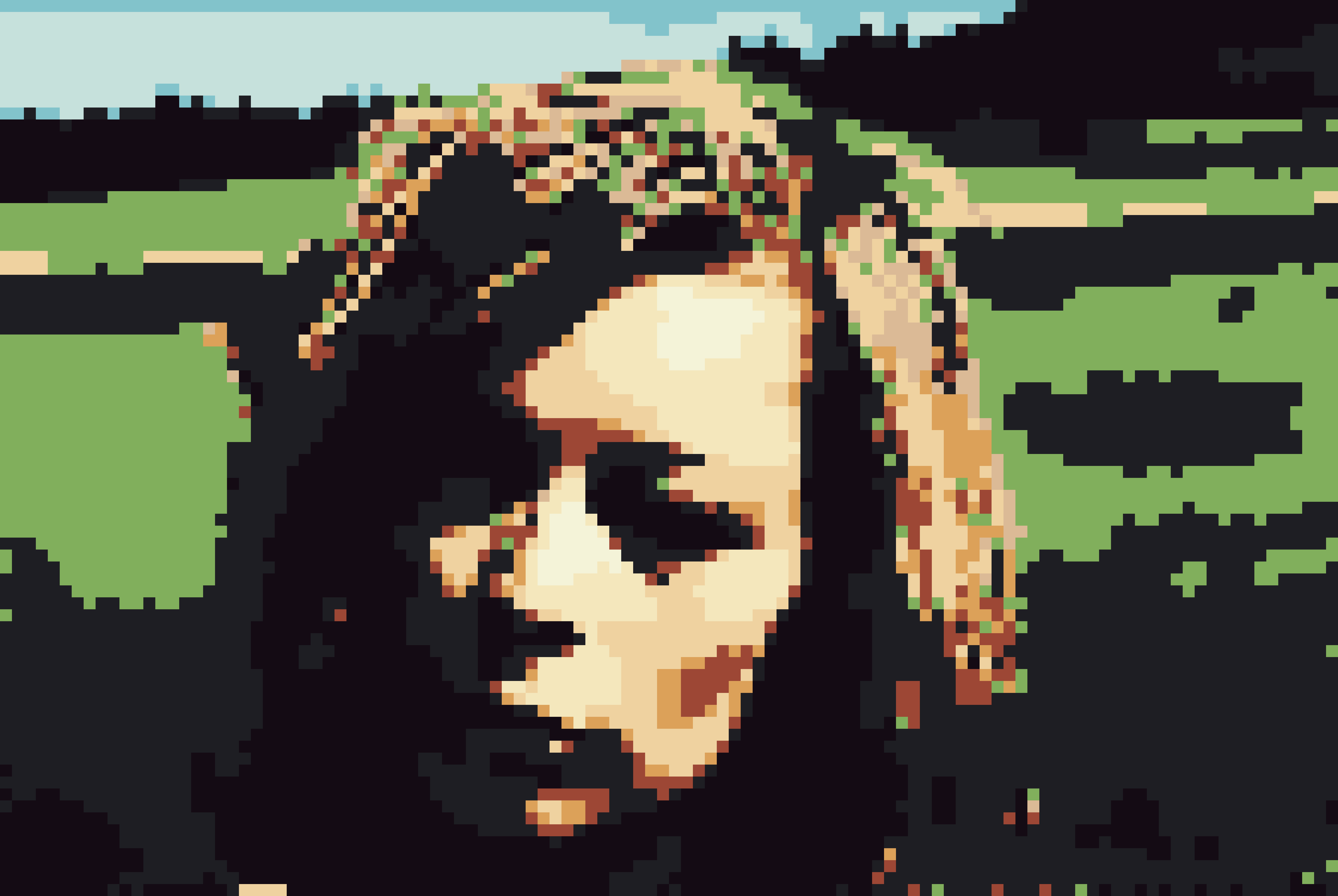 CarlosXander wrote: ↑
19 Feb 2022 16:53
my theory I keep insisting that in this part of the filming it is LGG with her boyfriend/husband or lover, it is her for me since she has her hair tied, it is true that it is not the clothes that we see later but it is clear that the clothes that alarece in the row is not hers and apart from the older woman she is the only woman who appears in the group who were later beaten and killed, it is my theory 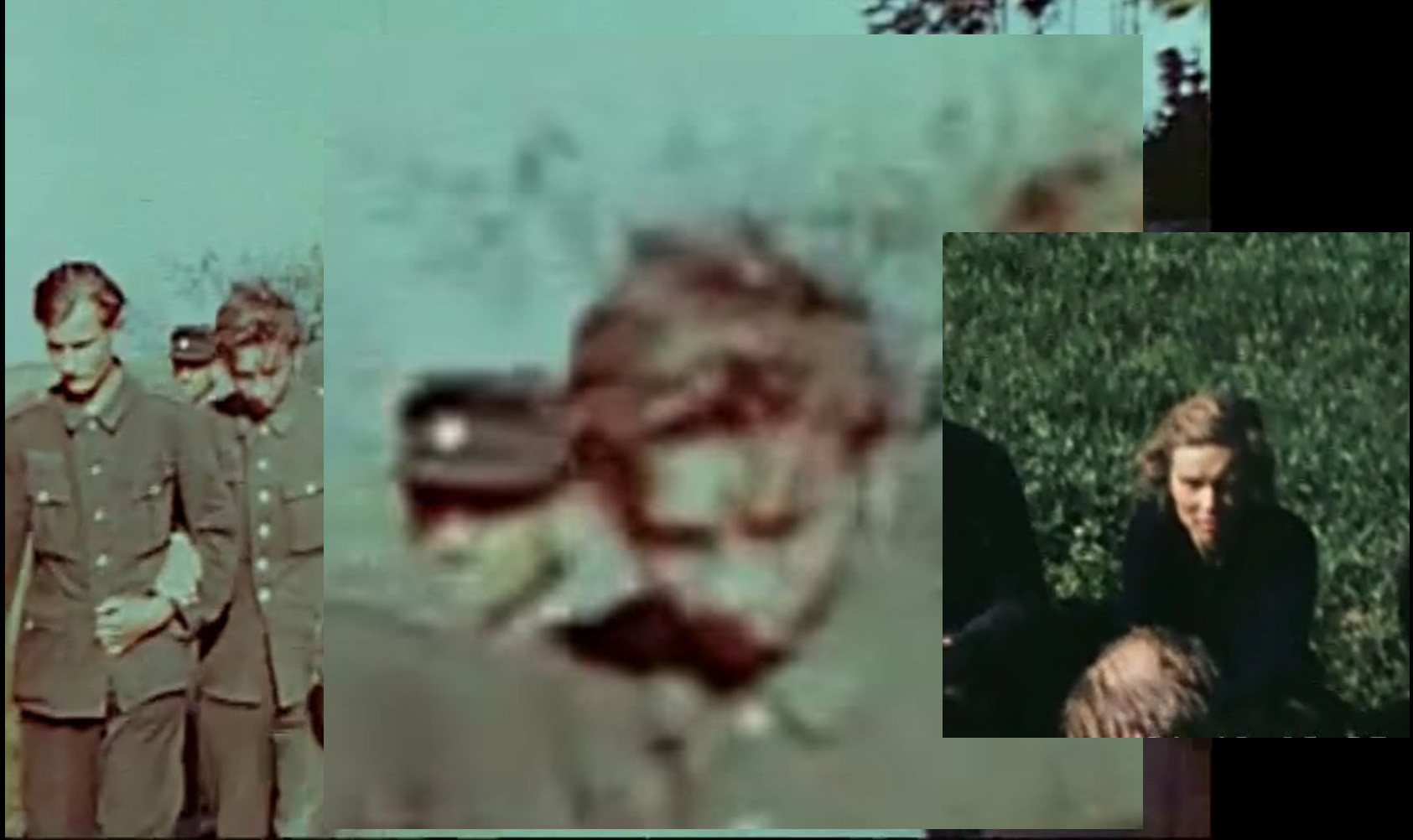 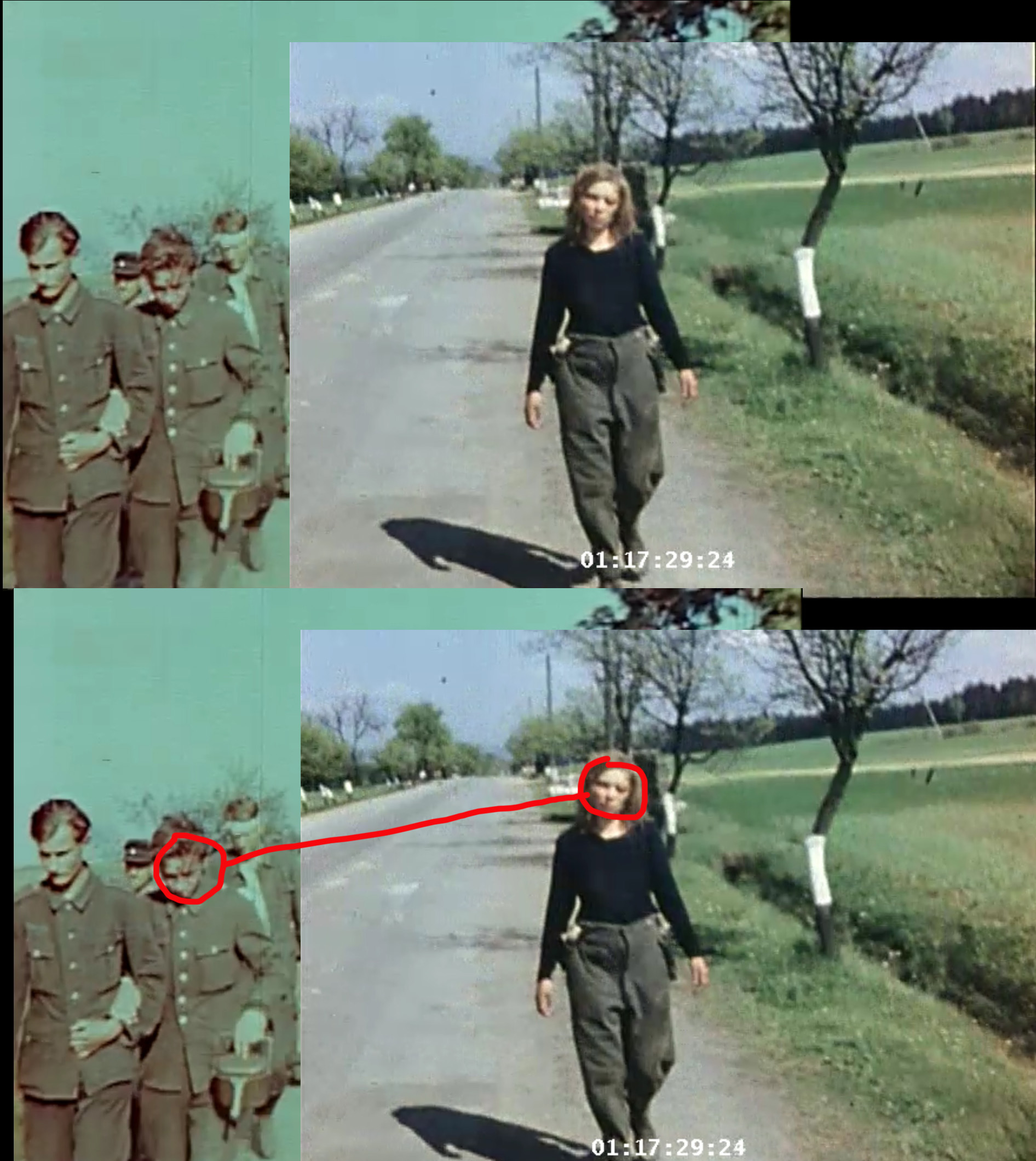 Yes, this is it. LGG was trying to look like a male and it was known that retreating German forces would do this to hide women from view for a host of reasons. To take it a step further the group they were marching with was stopped by the Czechs to look for SS. The small group of SS officers trying to blend into this group made a run for it and there was a pursuit, shoot out, and maybe even hostages taken. These details were known and is was also known that a small group of SS broke off from a larger column trying to flee. These are in Czech police reports. I believe the Germans off camera were what was left of this group. They prob surrendered or made it to an American unit. LGG had injuries that look like a rifle butt hit her, so I think she was not killed intentionally but let go. To positively identify her it will be necessary to identify someone in close proximity to her that day and work backwards.
Top

If you write about it long enough, then all these assumptions become self-aware, and that's exactly the problem.

Ignorance, guesswork, speculation, where will it all end..?

No. That is not her. Any other theories?
Top

greetings forums
the digital magazine "allnewspress" uploads a note of LGG based on the investigation of the forum, which is the note that was uploaded in February of this year in the German newspaper "Stern" little by little its story is being known in the media

It is good to see more people are interested in this topic than just AHF. It would be better if writers would put some effort into doing some research so they could write a better article.

1. The woman does not hold a deck of cards.
2. The trousers are not enormous. The waist and length of the trousers fit her. The waist is let out all the way and she does not need to use the braces to hold them up. The shirt fits. What she wears fits her as well as the uniforms of most of the soldiers that are seen.
Unless she was bigger than the average woman it would have been hard to find clothes that fit while out in the field. Chances that she got these clothes off a dead body, or someone had spare trousers that fit are not very good. They are hers or were given to her before the soldiers left their barracks. A woman at 4:59 is dressed in a similar way. https://www.youtube.com/watch?v=bSIk7yUHzrQ
3. At the end she and the soldier next to her appear to be listening to the soldier in front of them. She never looks and smiles at the cameraman.
4. While it was not said in this article, some have said that someone gave her the cloth/handkerchief. The cloth she held to her face was hers. Why would it not be? You can see many civilians and soldiers with handkerchiefs. They were very common.
She had the presence of mind to start out with money, what looks like a red DAF book with a white ID card/paper or photograph sticking out 5 mm out of the top of the book she held. So why would she not have a handkerchief/cloth too?
5. Civilian or military? Civilians carried DAF books, soldiers did not. She has no Erkennungsmarke or Soldbuch that can be seen. Some soldiers can be seen with an EK around their necks and/or a Soldbuch in their jacket pockets in parts of the 4 different USHMM film footages. Even the dead ones.
6. How could they tell someone was in the SS. Some of the dead and dying soldiers wear an EK that can be seen. Chances are they still carry a Soldbuch. Both may tell if they were SS.

What I see is a woman that was full of fear, desperation, humiliation and finally relief.

Someday someone like Peter Jackson will become interested in this topic enough to have forensic lip readers watch the film footage and reveal what people had to say at the end of the war.

While walking on the road the woman opens her mouth three times. Was she about to speak? While sitting in the ditch she looks at and smiles at the German soldier in front of her and opens her mouth. Not the cameraman. Did she say something? Nobody knows the answers to those questions yet.
It was the end of the worst conflict the world has ever known, and they were still alive. What these people had to say would be just as significant if not more than the conversations in Peter Jackson's They shall not grow old.

Here is another film clip from the end of the war. At 5:55 American officers are talking to German officers. There is a jeep with a .50 caliber MG mounted on it. American soldiers are sitting in it. A soldier reaches up and dips the MG barrel at the German officers. An American officer sees this and shouts at the soldier. It would be interesting to know all of what was said.
https://www.youtube.com/watch?v=bSIk7yUHzrQ
Top

dear wirklich very good point of view
I want to complement in one of the points is "she opens her mouth three times. Was she about to speak?" It is possible that with the blow she received on her left face, she finds it difficult to breathe since it can affect part of the nose or that she is agitated by the event already seen
Another point is that Peter Jackson is more of a fan of the First World War, he has restored several tapes from that time and until recently he was one of the investors of the Wingnut Wings brand of scale models, I don't think he is interested in the history of LGG, I dreamed that maybe Steven Spielberg could make a movie or something about LGG since he is the owner of the original filming but I don't believe either because of the supposed identities of LGG (that she is an SS)
but it is possible that the Germans make something of it, since little by little they make movies related to the second war showing another point of view, perhaps starting with the very good fictional story of Mr. Diego Rodríguez Peregrin in his blog Aerial Phenomena, but as There isn't much of LGG I think it would be difficult for something to be done... not impossible
Cheers
Top

I don't see anything like that, I see my grandmother and her little daughter fleeing from the Czech hordes who crushed everything German, killed, shot, hung them from a tree, doused them with petrol and burned them alive.

In the villages, the Germans were simply beaten to death, all of them, with a club, with a piece of wood, or just kicked to death with their own feet, it was exactly like that.

However you could take another human being from this life to the afterlife.


In later years I often talked to refugees from the Sudetenland, very often.
The Germans were simply massacred, beaten to death, shot, burned, or hung up by their feet, left to the fire, the revenge at that time was endless.

It was war, there were no rules...

Mother and daughter were lucky, nothing happend to them, a unit of Waffen-SS soldiers, still in the control of their weapons, they took care about the women, and their childen. On a train to Bavaria.

I wish, I was able to write more about it, it's black hole, the survivors deny it, the rest is silence.

When mothers and children are beaten to death, there is no third generation, only a few survivors.

Was it right to slaughter the Sudeten Germans like cattle, out of revenge, pure retribution, I don't know, there are no answers...


Just the first 5 minutes the film is pure "Scheisse", sorry.

"Heimat" is the term, what we all love, no Nazis, no war, it is very simple, the wide open skies, the silence, there is no hate, no love, it is just like it is...

Actually many Poles who were there (mostly as forced laborers) wrote about the massacres of the Sudeten Germans, and some Russians did that too in their books.
Top

The Czech film " I served the King of England " deals with the Sudeten issue also. By the way, a very good film

the 2006 movie "I Served the King of England" was not known to me, thank you very much for your mention.

I'd love to watch this movie as soon as I can...

My mother Ingrid always denied her memories about the escape, was never able to tell about it, self-protection.