Discussions on the role played by and situation of women in the Third Reich not covered in the other sections. Hosted by Vikki.
2525 posts

I have nothing new to add but I am totally amazed with this thread, of which I spent most of last night reading and hoping to find out her identity. Alas it wasn’t to be, but hats off to those who did the research on her identity and the location too.

Also, under my original account drum_dude I did start a thread here about her back in Jan 2006. Obviously it didn’t get as much attention as this thread but I assumed no-one was interested. How wrong was I, eh? Here’s what I posted all those years ago:

Unfortunately, I can’t log in as drum_dude due to not remembering my password and my old email address is long gone. So I registered today with drum_dude2 just to let you all know how amazed I am that only a few short years later, another thread started and exploded with info. However, I guess we’ll never find out who she was.

hello Drum
at least you are the first to try to find the identity of that woman, as you can see nothing has been found yet
Cheers
Top

I read a witness report in a German newspaper about a refugee who survived her escape passing the north-east of Germany and the Czechoslovakia in 1945.

The translation
The joy lasted only a short time, because without their knowledge, the infirmary was moved head over heels to the West. Hope germinates in T. Scholz when comrades of her fiance took her with them. As this was strictly forbidden, she had to wear a uniform for air intelligence assistants. So: From Hirschberg via Czech territory towards the US troops. Then the shock. Immediately before the end of the war, they were attacked and captured by Czech partisans in a grove. Suddenly, the uniform was life-threatening for T. Scholz. Because the Czechs also hate the Germans. And they let the prisoners feel this hatred day and night.
With a lot of luck, she was spared what other women had to suffer there. She has not been raped. Even more luck: A Czech employee of the camp felt sorry for the women and helped some of them to escape. Including T. Scholz.........
Of course I don't know if LGG was one of those freed persons.

One should have read the books and eyewitness reports about this mass murder of the Sudeten Germans.
The victims are far away, the children and grandchildren still live with no memory of their ancestors, memories shattered...

hello
very interesting information wellspring, this can also be read in the book "Zur Problematik von Soldatinnen..." by Jutta Rüdiger on page 63 mentions that they were forbidden to enter the forest because Czech partisans went through that place to capture distracted people since they stopped themselves time only those "classified" as SS were there (they were from May 10 to 21), they only entered 15 meters where there was a stream and always 2, it is said that there were 100 women at that time, in the story only It is said of 2 kidnappings, an artillery chief and his companion, but she managed to escape and return with her.
I leave the page (in German) where these facts are mentioned
Cheers 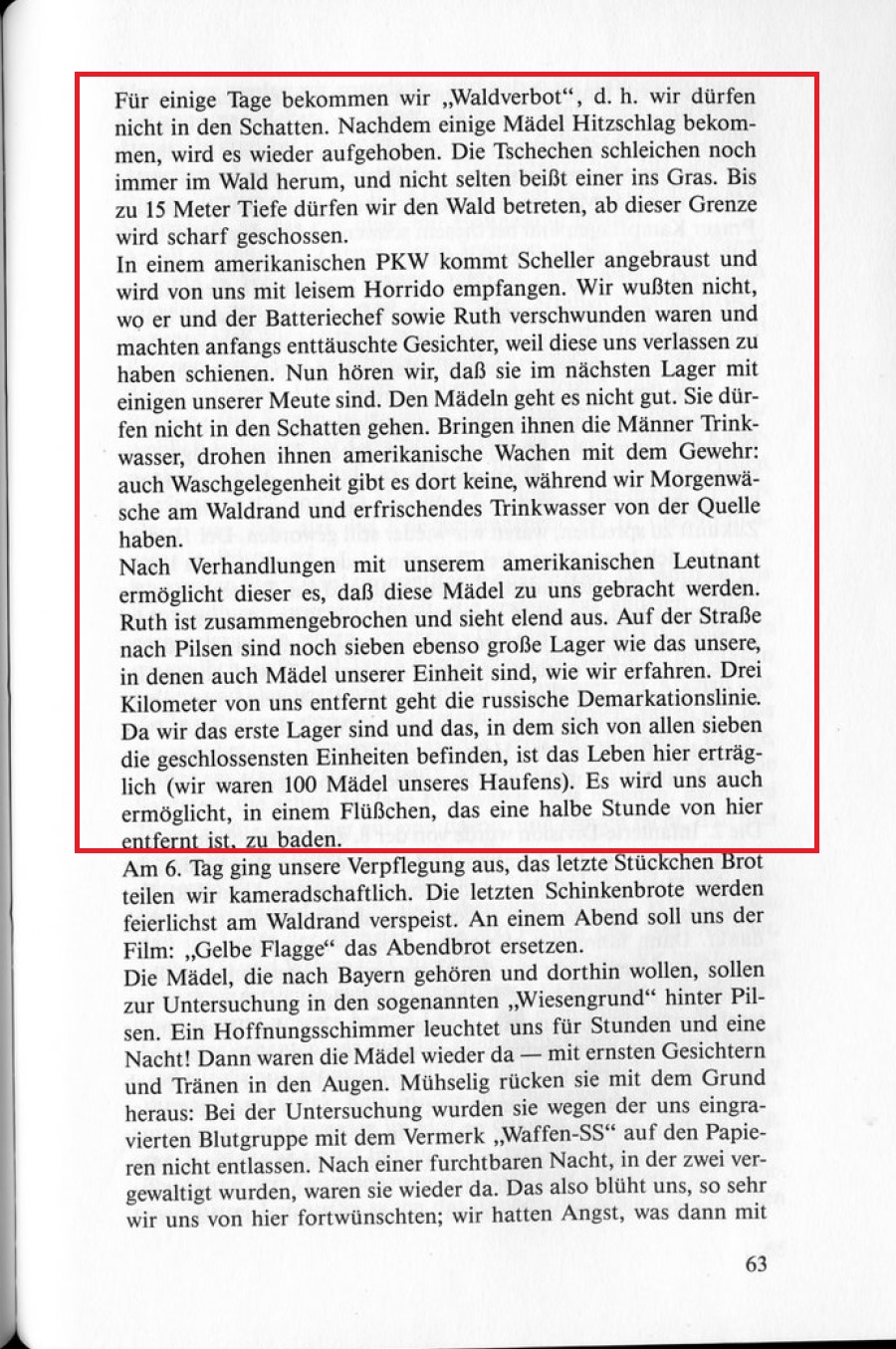 ·For a few days we get "forest ban", i. H. we may
not in the shadows. After some girls get heatstroke.
it will be canceled again. The Czechs are still sneaking
always around in the forest, and not infrequently someone bites the dust. until
We are allowed to enter the forest up to a depth of 15 meters, from this limit
is shot sharply.
In an American car, Scheller comes terribly and
is received by us with quiet horrido. We did not know,
where he and the battery chief and Ruth had disappeared and
initially made disappointed faces because they were leaving us
have seemed. Now we hear that they are in the next camp
some are our pack. The girls are not doing well. they may
don't go into the shade. bring them men drinking water,
American guards threaten them with rifles:
also there are no washing facilities while we do morning wash
at the edge of the forest and refreshing drinking water from the Quella
to have.
After negotiations with our American lieutenant
makes it possible for these girls to be brought to us.
Ruth has collapsed and looks miserable. In the street
after Pilsen there are still seven as long as ours,
in which girls are also our unit, as we learn. Three
The Russian demarcation line is kilometers away from us.
Since we are the first camp and the one in which all seven
where the most closed units are, life here is tolerable
(we were 100 girls of our bunch). It will be us too
allows, in a creek that is half an hour from here
away to bathe.""
Top
2525 posts