Discussions on the role played by and situation of women in the Third Reich not covered in the other sections. Hosted by Vikki.
137 posts

If Himmler's daughter was so affected by her Father one could only imagine
how Hedwig's two made out?
Top

[ca. 1951-1952, Peiper is sitting in the Landsberg prison, his wife Sigurd and children live near Baden-Baden. Sigurd Peiper, nee Hinrichsen, had also been Himmler's secretary before her marriage.]

Hedwig Potthast, who had also once been a secretary for Heinrich Himmler, and who had had two children by him, Helge and Nanette-Dorothee, lived next to the house where Peiper's family then lived. She worked in the same firm as Sigurd Peiper and had helped her find employment there. Peiper's son, Hinrich, was in the same class as Helge in the college preparatory high school at Baden-Baden, while Nanette-Dorothee was in the same grade school class as the youngest Peiper daughter, Silke. Hedwig Potthast had become a friend of Frau Peiper's and also wrote to Jochen Peiper, whom she also knew well. It had been agreed that Peiper whould tell her children who their father was."

The last sentence confuses me. It implies, that Hedwig's children didn't know who their father was! This would explain why they are hidden so completely: because they just don't know (and so cannot expose themselves even accidentally). Providing, of course, that Peiper never told them : ). Also, it was interesting, that Hedwig didn't want to tell them herself, and needed a male friend of the family to reveal this sensitive information. Interesting, why she decided so... maybe in hope Peiper could make something better of their father than they were told at school.

Note, that Hedwig could not find anybody for this talk, who was free (i.e., not in jail). Agte doesn't give the exact date of this passage, but seemingly it was after Peiper's death sentence was changed to the life sentence. Well... a little better, but still: to trust solution of such a crucial family matter to a man who has all chances to spend his whole life in a cell! Amazing... if true. Probably this shows that there was indeed a close friendship between the families and she didn't want to involve any strangers.

Peiper was released at the very end of 1956. Agte's book says nothing more about the Potthast family. Probably meanwhile the situation changed and the epic revelation never happened (or never was told to historians : ).
Last edited by Snarka on 13 Jun 2011 22:09, edited 2 times in total.
Top

In those days being the illegitimate probably wasn't such an easy thing for children and probably came with
some shame. I don't doubt the Mother tried to protect them and also for hereself it probably wasn't advisable
to have it common knowledge about Himmler.
Of course those in the circle all knew and he was still married to his wife?

It couldn't have been easy for all the children of those in the circle. Unless they had very loving
and remarkable Mother and family life would be difficult.
Top

I don't doubt the Mother tried to protect them and also for hereself it probably wasn't advisable
to have it common knowledge about Himmler.

This is certainly true! What was a surprise for me, was that the children didn't even know themselves who their father was. Though it is quite understandable: they were less than 10 years old and wouldn't keep this secret.

Probably this also explains why trust this talk to a man who was sentenced to life in prison: they all believed that eventually he would be released, and then maybe the Potthast children would be much older to understand all this...

Anyway, having read this whole thread, I'm impressed by the thoroughness of the secred around this family. Seems that this short Agte's passage tells about Potthast's life more than was known ever before...

Is this photo from the beginning of the thread really Hedwig's? Proven and true? : )

Attractive daughter of a Cologne businessman, she became secretary to Himmler and later his mistress when he lost all affection for Marga, his wife. In 1942, Hedwig gave birth to her first child, her second was born in 1944, another daughter. Himmler, not wishing the scandal of a divorce, borrowed 80,000 marks from the Party Chancellery and built a house for Hedwig at Schonau, near Berchtesgaden. They called it 'Haus Schneewinkellehen'. There she became friends with Bormann's wife Greda, who lived nearby.


So it seems Himmler didn't want a divorce. For sure I would not have told the children whom their Father was.

I always felt sorry for Bormann's wife Greda. He didn't really treat her with love and respect.
He was a bully.
Top

The above photo is a young Irma Grese, the notorious Belsen guard.
Top

So, there is absolutely NO any picture of Hedwig Potthast?
Top

Well, I have practically looked at all the axis forums post on Hedwig
and searched on the net and there seems to be no photos of this woman.

Can't believe that none exists. Perhaps ulsteinbild has something?

I did read that Hedwig's son was named Helge.

Since she was his mistress and not his wife she probably did not have
photos taken. Unless someone whom lived local took a photo of her
and her children.
Top

How about this?
http://wissen.spiegel.de/wissen/image/s ... humb=false
Max
Greetings from the Wide Brown.
Top

Thank you very much, Max!!

Now, I hope some historians come here, see the photo and tear it to shreds : )) I mean, and prove that this is another woman : ).

Would it be a violation to post it here separate from the file? Just because links have a bad habit to die with time. There are many extremely interesting but hopelessly dead links in old threads... 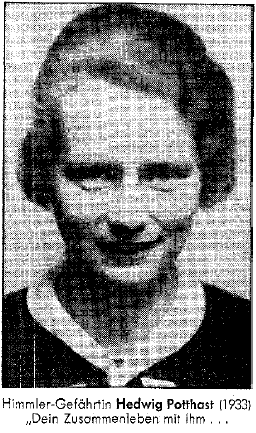 The header is "Spiegel-Serie". Probably some publication of the "Der Spiegel" magazine. AFAIK, it was a major DDR magazine...


Annelie: Since she was his mistress and not his wife she probably did not have
photos taken. Unless someone whom lived local took a photo of her
and her children.

I would rather assume that there could be some photos pre-1940s, when she was Himmler's secretary and nothing more. At least there is such a photo of Sigurd Hinrichsen, another Himmler's secretary (who later became Frau Peiper).
Last edited by Snarka on 14 Jun 2011 15:32, edited 1 time in total.
Top

One can not say no confirmation of that photograph is XY.
I would like to take one example: the photo editing Bundesarchiv (Bundesarchiv_Bild_101III-Alber-090-14A, _Marga_Himmler_mit_Tochter) is false.
I can only say that the picture of Helge Potthast Bundesarchiv is true? I have no confirmation here and we can not say that. Here we have only shown a photograph of Hedwig Potthast that many publications and television channels (History Channel) was not his.

Helge
You do not have the required permissions to view the files attached to this post.
Last edited by Helge on 14 Jun 2011 10:15, edited 1 time in total.
Sota ei päätä kuka on oikeassa, vain sen että kuka on jäljellä.
War does not decide who is right but only those who are left.
Top

Thank you, Helge! I'm also impressed with your other posts in this thread, they are very helpful.


Here we have only shown a photograph of Hedwig Potthast that many publications and television channels (History Channel) was not his.

You mean, this photo of a woman with a girl - is NOT Hedwig and NOT Marga, correct?

Actually... this is a bright brunette with a prominent nose... I don't think she would be to Himmler's taste at all : ). Of course this effect could be just a play of shadows and light.
Top

I think that the answer to many things we have to investigate much more: the archives, people. Do you think that we were not the birth dates of some of Hedwig, Helge and Nanette Dorothea . Now we can get these results but only by working together.

Helge
Sota ei päätä kuka on oikeassa, vain sen että kuka on jäljellä.
War does not decide who is right but only those who are left.
Top

"Relative seclusion from Allied bombs meant Hohenlychen became ahaunt of Nazi leaders, and dark conspiracy. Gebhardt treated Hitler’s architect and Armaments Minister Albert Speer, the French Minister of Production Jean Bichelonne, the Nazi agriculturalist Walter Darré, and other prominent politicians. That Bichelonne died after his operation and Speer considered that Gebhardt had attempted to kill him while under treatment in January to March 1944 made this a deeply sinister institution.
Gebhardt sheltered Himmler’s mistress, Häschen Potthast (the‘little hare’), who gave birth to their second child at the sanatorium."

With these documents we can say that Nanette Dorothea was born in the city Lychen of the day June 3, 1944

Helge
You do not have the required permissions to view the files attached to this post.
Sota ei päätä kuka on oikeassa, vain sen että kuka on jäljellä.
War does not decide who is right but only those who are left.
Top “Hegewld, 9. VIII 42. My dear little bunny! I’m about to drive over and will call you and hear your dear voice. Quickly just a few lines regarding the parcel, they are all without value but chosen with love; perhaps you can use them! An illustrated magazine is also enclosed and I’ll be with you in spirit when you look at it. * Say hello to our sweet one; hope he does not hurt himself with his rattle. The barometer is for you. – Thank you for your dear letter! Write again soon! I love you forever. Many thoughts of you and Walchi. Your *.”

Well, that was rather sweet.
Max
Greetings from the Wide Brown.
Top
137 posts