Leni - Never to be forgotten

Discussions on the role played by and situation of women in the Third Reich not covered in the other sections. Hosted by Vikki.
13 posts • Page 1 of 1

Leni - Never to be forgotten

Richard Corliss, writing a review of the Müller documentary in Time magazine, pointedly makes this the center of his critique, asking more directly than others have in the past, why can Riefenstahl not escape her Nazi legend? Certainly Riefenstahl's political taint is not unique. Other artists tolerated or supported European fascism and continued their stardom in the postwar era: Céline, Roberto Rossellini, Salvador Dali, G.W. Pabst, Douglas Sirk, Richard Strauss, Herbert von Karajan, Gottfried Benn, Ernst Jünger, and Gustaf Gründgens, among others. Even Veit Harlan, the director of the anti-Semitic Jud Süss, who worked closely with Propaganda Minister Goebbels and whose films were "more in tune with the political interests of the Nazi government" than most, was able to revive his career in the 1950s. Fritz Hippler, creator of the most vicious Nazi propaganda film, Der ewige Jude, was apparently "denazified" in 1951 and employed by the US Army as a translator.

The absence of women in this list is glaringly obvious. It is a fact that cannot be denied in even the most contrived arguments on talent, fame, and political favoritism that male directors, actors, and writers continued to work in postwar Germany and Europe, whereas the end of the Reich was also the career fade-out for many female cinema artists of equal popularity: the director Riefenstahl, but also such popular German-language icons as Zarah Leander, Lilian Harvey, Marika Rökk, Lil Dagover, and Veit Harlan's wife, Kristina Söderbaum.

Born Leni Helene Bertha Amalie Riefenstahl on August 22, 1902. Ballet dancer, actress, film director and producer, she was born in Berlin and founded her own film company in 1931 to produce 'The Blue Light'.She was appointed by Hitler to produce films for the Nazi Party such as 'The Triumph of the Will' and her masterpiece 'Olympia', the famous documentary of the 1936 Olympic Games held in Berlin. She has always insisted that she was never a member of the Nazi party but neither was she an opponent of Hitler. Before the war her films received all the international awards but after the war Lenii was castigated because of it and spent almost four years in Allied prisons. Boycotted and despised, she has never been able to make another feature film. Editing the film she says, 'nearly ruined my health'. In 1952 she was cleared of war-crimes charges by a German court. Today in Germany, the film remains under lock and key. In 1962 she travelled to Africa and spent eight months living with the Nuba tribe. At the age of 70 she undertook an underwater scuba diving course and for the next 18 years filmed hundreds of undersea documentaries. At age 90, Leni Reifenstahl became a member of Greenpeace. She regrets ever having made 'Triumph of the Will'.
Leni died in 2001, just before her 100th birthday.

There is a fascinating documentary about Leni called Die Macht der bilder: Leni Riefenstahl (I forgot the english title). Depending upon where you live, it may be found at selected video stores.

, thought she is still alive!
Top

They're wrong with her "death in 2001". At least in April-May this year she was still alive.

She is alive and well, celebrated her 100th birthday yesterday.

It's nice to hear she is still around.

The only information on her current whereabouts was the death notice. Can you help me out, please.

The picture is from one of her 'mountain' films, I would guess early thirties. It is from an exhibition in Cologne.

I see on line that she has her own web site:

That should have the most up-to-date information about her.

Greeted by her fans, then and now: 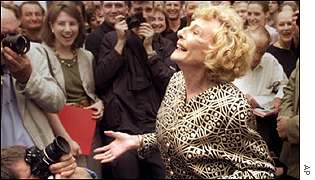 sylvieK4 wrote:I see on line that she has her own web site

As Mark Twain once set, when a newspaper wrote he had died: 'The report of my death has been greatly exxagerated."

Although she was by no means as innocent as she claims, she and the other women actresses and directors were grossly discriminated against compared to their male counter parts. (See my first post).

She looks better than a lot of women half her age.

The picture is from one of her 'mountain' films, I would guess early thirties. It is from an exhibition in Cologne.