Discussions on the role played by and situation of women in the Third Reich not covered in the other sections. Hosted by Vikki.
707 posts

Hello there, new to the forum and hope i have chosen the right thread to try to get some answers. As ever, with family history, things come to light after a relatives passing and this has happened to our family when some photographs of my late Mother-in-law surfaced after her passing recently. Mum was born in Krefeld in 1926 and married Dad in the UK in 1953 after he was posted back to the UK from BOAR where he met Mum. He was stationed in barracks in Krefeld.
My wife has always had memories of her Mum telling her about using morse code and radios whilst serving in the Luftwaffe in 1945 and that she was stationed in Lubeck. We have now found 2 photos of Mum in her role as a Luftwaffen Helfrin (I think!) and so we start to try to get more info so that the family can have a precise and informative record of her service.
So 2 photographs which will hopefully appear, 1st is a group of Helferinnen with Mum on the right. On the back is her writing with what we believe to say 'Can you find me?'
2nd photo is a photo of her with her battery. On the back she is saying where she is, but I cannot decypher the location, although the date confirms when she was there, wherever it is. The other writing is from Dad and presume he sent this photo back home to let his family in Manchester know about his soon to be bride. As described in the photo, Mum is identified by a cross. I was amazed and deeply saddened to see the faces of the young crew, it looks like a school photograph, hard times indeed for the young Germans of that era. Interesting that all the 'seniors' are older men. so the battery had old men, boys and women as crew.
As an interesting aside, I served 12 years in the RAF, in Bomber Command and it is a tad ironic that this wonderful ladies daughter married a man whose venerable forebearers she tried to shoot down! Also when Mum was brought abck to the UK in 1954 she did face some hostility from the locals, the Luftwaffe had bombed the local sweet factory in 1941!!
Any help re service, location, rank badge, trade qualifications would be greatfully recieved.
You do not have the required permissions to view the files attached to this post.
Top

"Luftwaffe Lübeck 4" reads: "Wie findest du es = How do you like it?"
"Luftwaffe Lübeck 2" (not captioned) reads:
"Unsere Batterie im Einsatz = Our battery during deployment/mission"
"The Girl Friend is the one above the x"
Top

Thank you for the translation, I was hoping for a location to be mentioned, but no such luck!

Did these women in the Wehrmacht or Waffen SS have any formal military rank structure?
Top

See this good thread ; viewtopic.php?t=167023
" The right to believe is the right of those who don't know "
Top

Found that very interesting, thank you.
But I think there is reference only to the Luftwaffe situation.

Was there a similar rank structure for Army and SS heirarchy? I am thinking along the line of secretarial, clerical, administrative personnel at the junior level.

As well, would the SD have women officially acting as operatives?
Note I am thinking more along the line of spies or undercover investigators, not camp guards. Would said women have been given a formal rank?
Top

Group photo with an Audi 920 staff car:
You do not have the required permissions to view the files attached to this post.
Cheers,
Max
Top

Not really a photograph but a frame from a video. Source : a documentary on RMC Découverte - "Les Pouponnières du IIIe Reich". 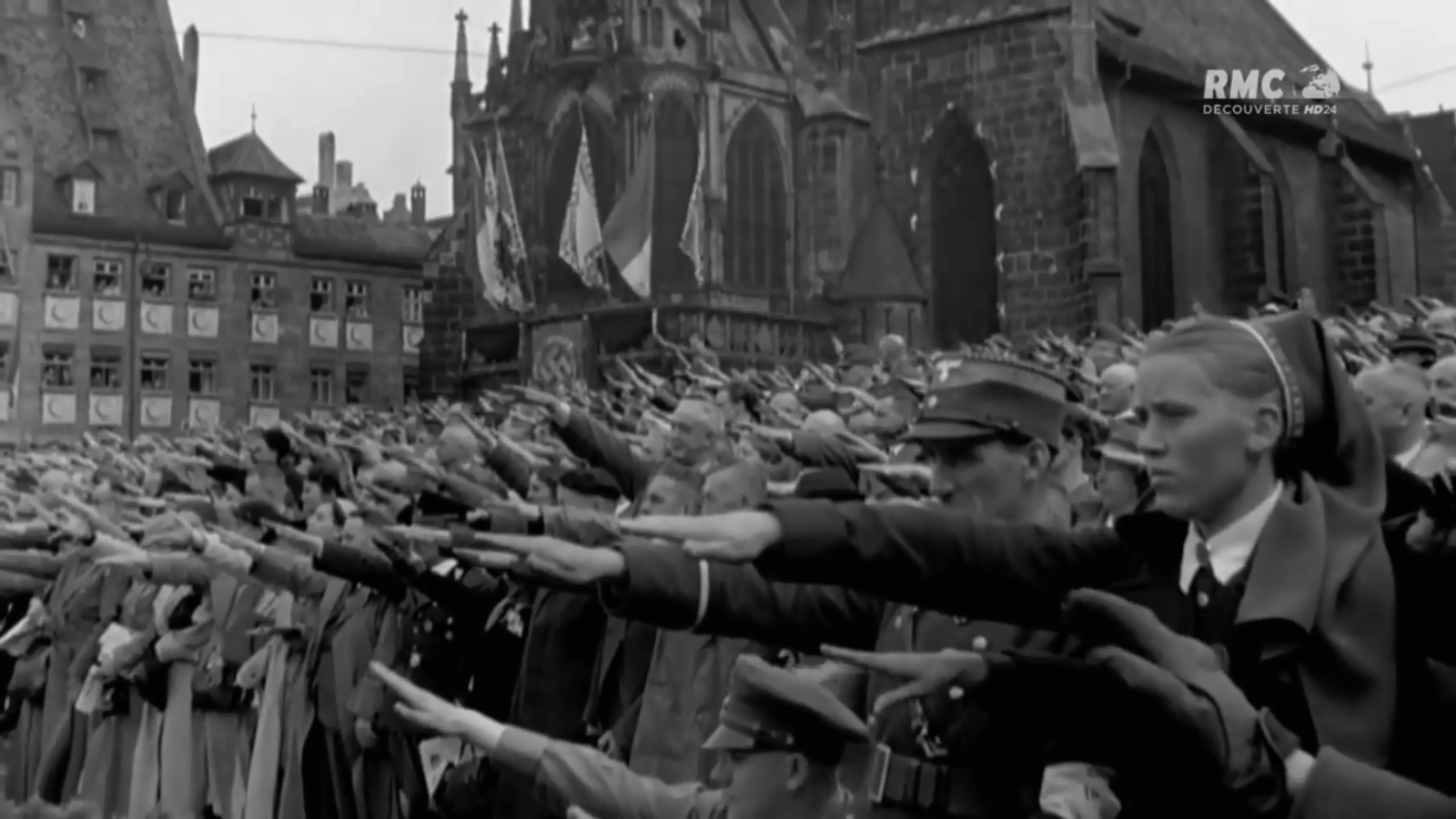 Does anyone know what is the uniform on the right, please ? I never saw it before. If you eventually have informations about the person here, it will be, of course, very appreciated too.
Top

Aleksandre wrote: ↑
22 Oct 2019 22:47
Not really a photograph but a frame from a video. Source : a documentary on RMC Découverte - "Les Pouponnières du IIIe Reich".

Does anyone know what is the uniform on the right, please ? I never saw it before. If you eventually have informations about the person here, it will be, of course, very appreciated too.


NS-Schwesternschaft Krankenschwester NSV
You do not have the required permissions to view the files attached to this post.
Sota ei päätä kuka on oikeassa, vain sen että kuka on jäljellä.
War does not decide who is right but only those who are left.
Top

Hi
Could someone please help me with this photo? I found it from Histomil-forum
http://histomil.com/viewtopic.php?f=338 ... start=5230
where it was placed under the title: “Bundesarchive Photos 1933 - 1945..+ all fields of WWII”

I tried to find the original from Das Digitale Bildarchiv des Bundesarchivs but couldnt find it from there.
It seems to me that the photo is originally maybe published in some propaganda publication? (is there raster in i?) the setting in it is more like a play-act. Are those girls luftwaffenhelferins making an oath for service?

I would be very happy if somebody knows more about the photo.
Best regards
Tapio Onnela 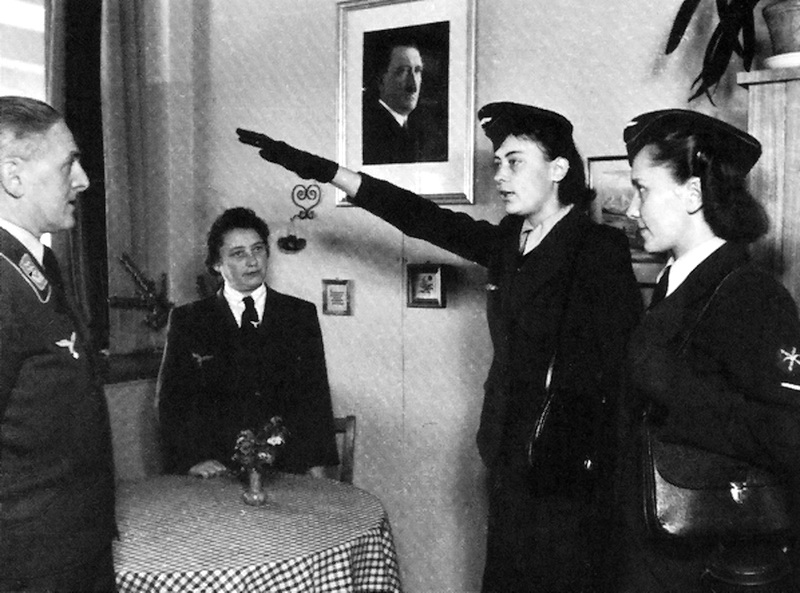 no, that´s not an oath sworing ceremony but the usual Hitler salute.
Top

Hi, Yes of course it is normal Hitler salute, that is obvious, but used in what situation? For me it seems that it is taken in a special event. The uniforms are probably luftwaffenhelferins?
Top

The officer on the left is a Hauptmann/captain of the Luftwaffe/air force as you can recognise on his rank insignia. The girls on the right are Luftwaffenhelferinnen (plural of "Luftwaffenhelferin"). The badge on the upper arm of the right girl identifies her as belonging to "Flugmeldepersonal", literally "plane reporting staff". I think we can call her simplified "a spotter" working with some technical equipment identifying enemy air planes.

I´ll see if I can find the image in the Bundesarchiv-photo archiv.

PS.: When you have been in the military already you sure know when being summoned/ordered to a rapport of your superior the first thing when you enter the room is to salute and state "Sir! Soldier xy [insert correct rank and name" notifies you of being present as ordered". That´s how it works here in Austria.
The same happened sure in the scene of the photo.
Top

Many thanks for this valuable additional information!
I am still wondering about the situation in the photo. Obviously it is taken for propaganda purpose maybe for some kind of publication? I still assume that the situation might be more than just simple “report for duty”. The flowers at the table for example. What is the role of the older woman officer at the left?
Top
707 posts