Discussions on all aspects of the USSR, from the Russian Civil War till the end of the Great Patriotic War and the war against Japan. Hosted by Art.
169 posts

Der Alte Fritz wrote: I really like this one https://3.bp.blogspot.com/-KcYInX96SYc/ ... 0%25A4.jpg what is the reference? Looks like one of items at the end of a big report and so not easy to find.

Thanks Eugen. Very pretty I always like the look of these crayon coloured drawings.
Top

You're welcome. I'm really interested with your works on Soviet TOEs. Hope that you, Art and Gary will be able to get all the puzzles together here.
Top 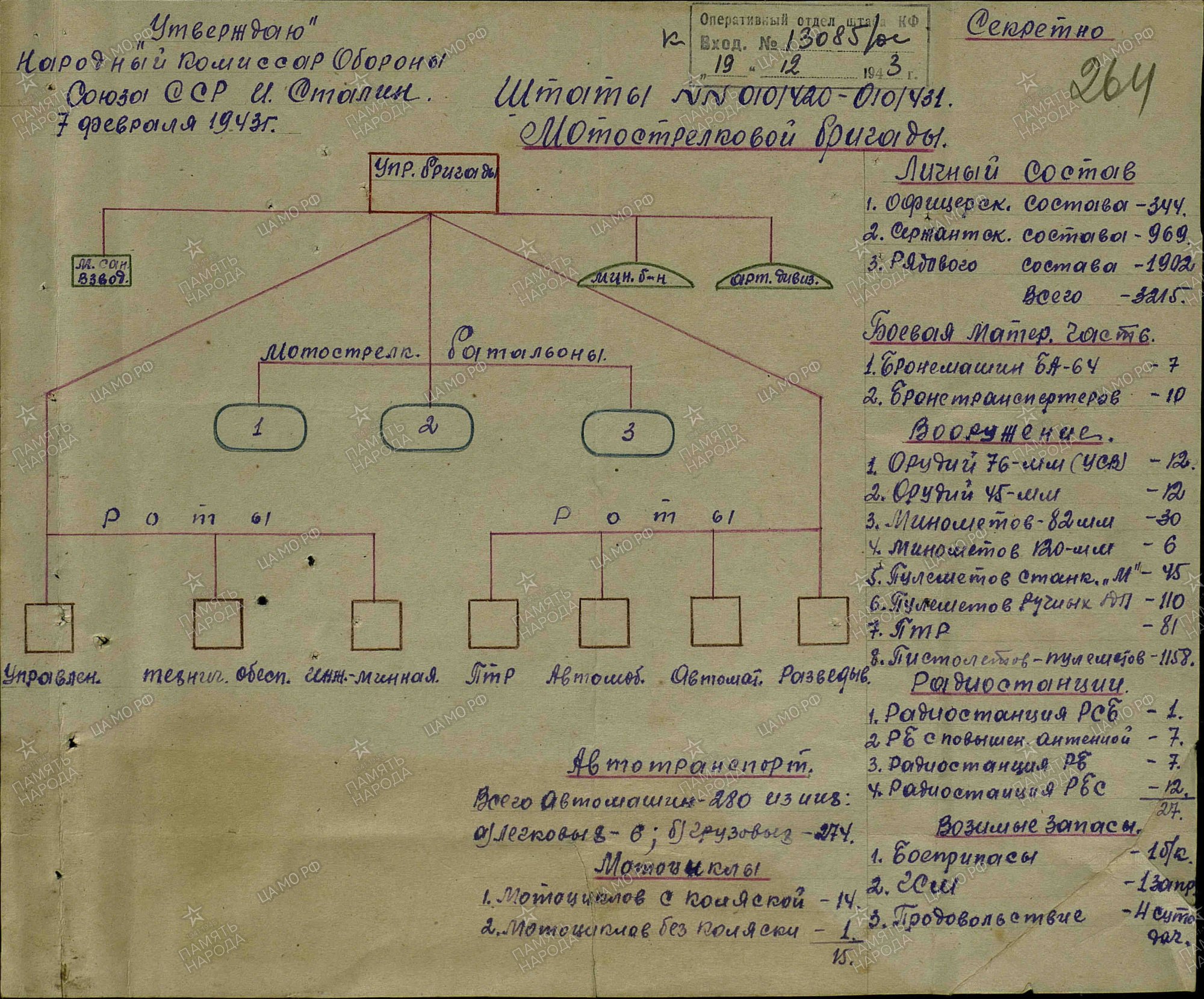 This chart gives the number of radios in the motorized brigade 010/420: 1 RSB, 7 RB with large antennas, 7 RB, 12 RBS, total 27. I suppose, the distribution of radios was as follows:
1 RB and 4 RBS radios in every rifle battalion, total 15 radios
Artillery battalion - 1 RB in the battalion HQ and 1 RB in every battery, total 4
Mortar battalion - 1 RB
The remaining 7 are divided between the HQ company and recce company. Probably 5 (including 1 RSB) in the signals platoon/HQ company and 2 in the recce company.
Inclusion of the AA company must give 1 extra radio, inclusion of the tank regiment 010/414 - 2 radios.

Worth to note that the motor rifle battalion was far better supplied with radios than "normal" Soviet infantry, where a rifle battalion, if lucky, could only have 1 radio for communication with a regiment. On the other hand the artillery battalion had only the most limited means of communications, which determined its employment in the direct fire mode. This notion is supported by actual after-action reports.

Excellent work.
I think that the end we will have to try and pull all this information into one table.
To help work out where we are in the overall Mechanised Corps work here is a table showing all the main units on a timeline and the sources (largely primary ones where possible) we currently have found. At the bottom I have put some general references at the bottom which would give personnel numbers and personal weapons for the sub-units where we have no information.
Sources.jpg
You do not have the required permissions to view the files attached to this post.
Top

I've just noticed a typo in the first table. The original ATR company should have 61 men instead of 81. In that case we have a nearly perfect match with:
https://forum.axishistory.com/download/ ... 418399&t=1
Just from a common sense a company with 18 AT rifles should be smaller than a company with 27 rifles.
Top

In Gary's shtat tables in the personal equipment section they mention "№2" and "№4" - remind me are these kinds of gas mask?
Top

Are you looking at the penultimate right hand column? If so that's linked to the amount of ammunition provided for their rifle. I think I started a thread on that general subject a while back which pointed out a few examples.

Screenshot 2018-07-22 18.09.12.png
Can anyone help translate this section from the Transport Company of a Motor Rifle Battalion (page 8 of 10)
You do not have the required permissions to view the files attached to this post.
Top

That was a bit I'd had a crack at, but on review look to have left a couple of blanks myself -

It is really the titles that I am struggling to read
I made the first one to be:
"Four detachments for carrying signals equipment, personnel and weapons"

and the second one
"Detachment for carrying? barrels? of Fuel, Engineer, Intendant? supplies and signals supplies"
Top

Four sections/squads for transportation of personnel and weapons