Discussions on all aspects of the USSR, from the Russian Civil War till the end of the Great Patriotic War and the war against Japan. Hosted by Art.
21 posts

Did the Russians use tank-buster planes in World War two?

if so, when did they start using them - Kursk?
How successful were they?

After our trek('the day AH died')
we were told that a burned out German tank near our village was
destroyed by a Russian plane.

Yes the Russian's had the best Tank Buster of the war, well at least in my opinion, and many historians also. The IL-2 Sturmovik was a terror on German forces.

There was the Il-2 and the Pe-2. The first was a tank-buster, the second, a dive bomber... Both were tactical support planes and lethal ones. 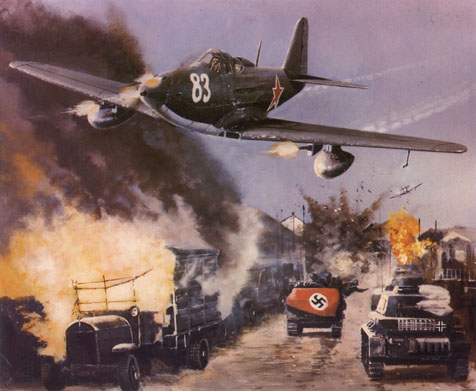 The Polikarpov I-16 and the Petlyakov Pe-2 were also used in this role.

I remember seeing an article about the P-39 in a book on airplanes that were examples of bizzare or faulty design. The P-39 had the engine placed behind the pilot and the crankshaft ran under the cockpit. If I remember correctly, a fuel tank was placed in the nose. It was disliked by most American flyers for obvious reasons. The articule also stated that as a pure fighter it's manueverablity and speed were only medicore.

It found it's niche in Russia. But was the Russian front the only place where it was extensively deployed?
Top

White Leopard wrote:It found it's niche in Russia. But was the Russian front the only place where it was extensively deployed?

As I understand Logan, the P-39s were not used in ground attack as many tend to believe. They were generally escorts for Il-2s or interceptors and they fared pretyy well.
The P-63 Kingcobra arrived to late to be used on the front in Europe. It was kept as a bomber interceptor in home defense and later as a trainer for jets, due to its tricycle landing gear.
Top

Btw, wasn't there in 1941 also a dive bomber version of the SB?
Top

The Il-10 came late in '44, therefore it didn't see extensive use as Il-2, even though it was used as a main tank buster in the Korean War.
Top

Thanks, I couldn't remember the name.
Top

I reckon Yak's versions of tank busters with high caliber gun should me mentioned as well. If I am not mistaken, it's Yak-9T. They weren't good as fighters and small numbers were used as ground attacking planes.
Top