A visitor to my site sent me this image of his grandfather.
I already have a suspicion.... what do you think?
Whats that uniform?

thanks in advance,
Christoph 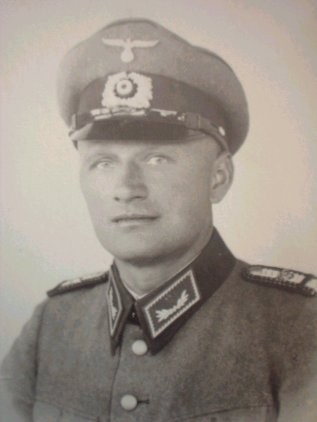 Thanks Marcus and Ken!

Any idea about the rank? I don´t have any info on custom uniforms.

According to Brian L. Davis, in his book on Third Reich badges and insignis. Customs Officials were divided between two groups, Landzollbeamten and Zollbeamten. The difference was indicated by the color of the braid on the uniform, dull grey for the first group and bright silver aluminium for the second . The collar tabs on the uniform shown were used by Officers of the Landzollbeamten between the ranks of Zollwachtmeister and Zollbetriebsassistent and by Officers in the Zollbeamten in the ranks of Zollwachtmeister, Zolloberwachtmeister, and Zollbetriebsassistent. I think that the shoulder boards are those of a Zollbetriebsassistent, but I am not sure since I can't quite make out what the devices are on the boards.

Thanks Ken for the info!!

You are very welcome Christoph. Glad to have been of help. Where in Austria are you? I lived in the First District of Vienna (Rathausstrasse 7) from 1985 through 1988. I have fond memories of my time there. From 1973 through 1975, I lived in Berchtesgaden, Germany and was in Salzburg, Melk, Linz, Innsbruck and Bregenz frequently.
Top

so you know Austria very well! And the 1.Bezirk of Vienna is also a nice place to live.
I live in Salzburg.