It's been quite some time since I posted here. Not sure if it's my place to make a general thread for such things, but if anyone else has similar material, it would be interesting to compile it all here. I found the following photos of a German (not sure of his rank) wearing American frogskin camouflage post-Normandy, as said camouflage was used by the US Army in the opening days of the Normandy campaign, but as far as I am aware, abandoned shortly thereafter as it apparently was too similar to SS camouflage. 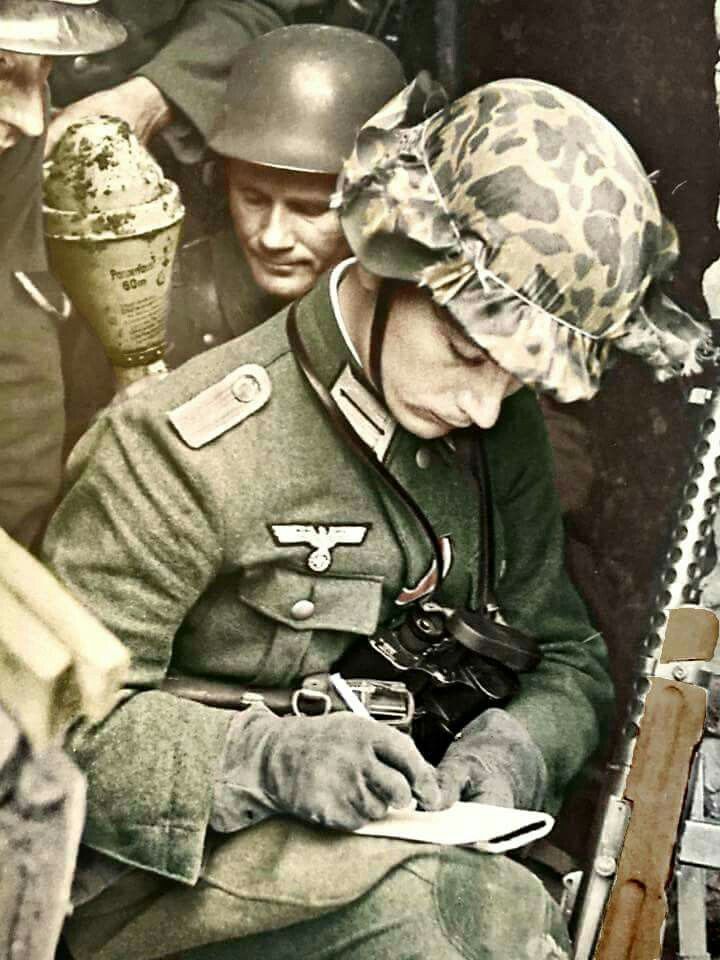 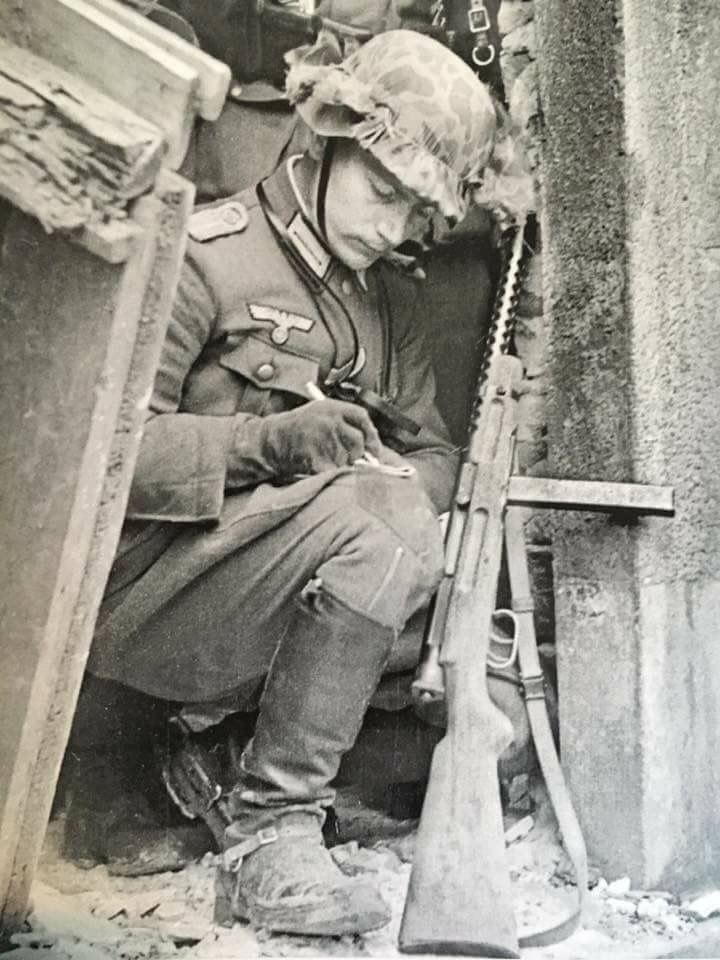 Has anyone else seen any photos of German rank and file reusing enemy garb? Perhaps Germans wearing American ponchos, or Russian coats? Perhaps vice versa?
There are three sorts of people; those who are alive, those who are dead, and those who are at sea.
Top

Nylon Parachute canopy material from the T-5 parachute, the countryside was lousy with the chutes after D-Day.

Material was used for scarves, Helmet covers , sun tarps, bedding, vehicle covers
"There are two kinds of people who are staying on this beach: those who are dead and those who are going to die. Now let’s get the hell out of here".
Col. George Taylor, 16th Infantry Regiment, Omaha Beach
Top

A Leutnant ( Second Lieutenant ) with an Italian Beretta M38 Submachine Gun.
It is also appreciated that he wears riding breeches, and spurs on his boots.
" The right to believe is the right of those who don't know "
Top

the interesting photos are new to me, my question; is there an informative website about the American camouflage patterns of those years, I would be very interested..?

Also similar photos of German soldiers who used these allied camouflage patterns at the time.

Thank you very much!

Hans1906 wrote: ↑
18 Jul 2022 10:59
is there an informative website about the American camouflage patterns of those years, I would be very interested..?

If you are curious to see some unknown US experimental camouflage, I made a post about it with pictures... but unfortunately, it seems no one as of now has anything to add.

I attached one photo that outlines another experimental US camouflage scheme that I at least have a name for. I have more photos of such things.

Below are some sites that I use. Let me know if you would like more. I have books too; save I can find all the URLs for where to buy them.

Not what you were asking for, but if you want anything Soviet-related:

Here is a link to buy a copy of the actual British Home Guard camouflage instruction booklet:

https://www.amazon.com/Guard-Manual-Cam ... B07Y4LNBDZ
You do not have the required permissions to view the files attached to this post.
There are three sorts of people; those who are alive, those who are dead, and those who are at sea.
Top

thank you for your complex answer, exactly the way you want an answer, very good!

I'll look at all the links with great interest and I'm looking forward to new insights...

thank you for your complex answer, exactly the way you want an answer, very good!

Gentlemen,
Without ever seeing this thread, I started this one:
viewtopic.php?f=50&t=266269

Does anyone know what type of unit the soldier in question was in?
Thank you,
Pat
He who lives by the sword, should train with it frequently.
Top

Jpz4,
Thank you for the reply. What does z.b.V. 406 signify, 'Special Duty Unit 406?' It sounds like an ad hoc grouping. So this was from Operation Market Garden, not Normandy?
Best,
Pat
He who lives by the sword, should train with it frequently.
Top

One last try-
Anyone know what kind of unit this officer was from? Clearly Heer and likely Cavalry, but any known specifics?
Thanks,
Pat
He who lives by the sword, should train with it frequently.
Top
11 posts • Page 1 of 1