Discussions on the final era of the Ottoman Empire, from the Young Turk Revolution of 1908 until the Treaty of Lausanne in 1923.
420 posts

I have a drawing of the same gun (cerved shield)?

Another phot shows it also looks like the 77mm L96 bu8t as stated these appear to have a strait shield.

So take your pick?

I have to apologize, I was a little hasty with my answer. You are both right.

37.jpg
turk75mmm10hogg-1.jpg
Cheers Holger
You do not have the required permissions to view the files attached to this post.
“Day by day and almost minute by minute the past was brought up to date. . . . All History was a
palimpsest, scraped clean and reinscribed exactly as often as was necessary” – G. ORWELL 1984
Top

Markus
You do not have the required permissions to view the files attached to this post.
Top

I have to apologize, I was a little hasty with my answer. You are both right.

Recommend throwing that book in the recycling if that's the best info it can offer.

Trying to sort out the Ottoman Krupp field guns ....

The majority of the field guns deployed by the Ottoman Army were 75mm Krupp M03 - Krupp never sold a 76.2mm calibre field gun.
There were follow up orders in 1910 and 1911 which differed in details. The Ottoman Army also received a shipment of 75mm guns
intended for Brazil but seized at the start of WW1. There were also captured Rumanian M04 75mm guns in service.

As well as the 75mm Krupp export guns the Ottoman Army also received 7.7cm FK 96 n.As - possibly around 100 of these.

Trucks of Süddeutsche Automobil-Fabrik, shortly „SAF“ or "SAG" from Gaggenau Sotht Germany carying :
Krupp 8,7/24 sm. mantelli sahra top
9cm Feldkanone C/80-veya 85 or
Krupp 87mm field gun M. 1885 or
Year 1909 or 1910
You do not have the required permissions to view the files attached to this post.
Top

at bulgarian Museum
You do not have the required permissions to view the files attached to this post.
Top

The serial number and barrel weight are recorded in both Turkish (and Roman) script, on the barrel of Mount Perry's 9cm K 73 (/ 91), together with the carriage serial number (in Roman script). 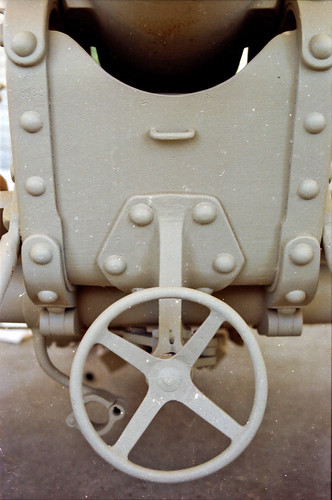 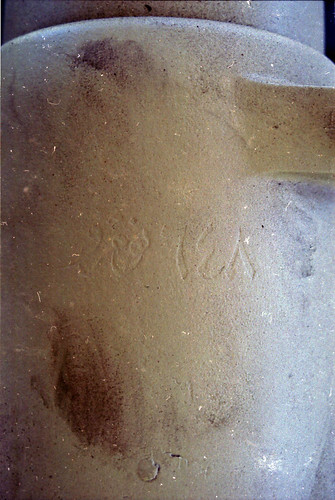 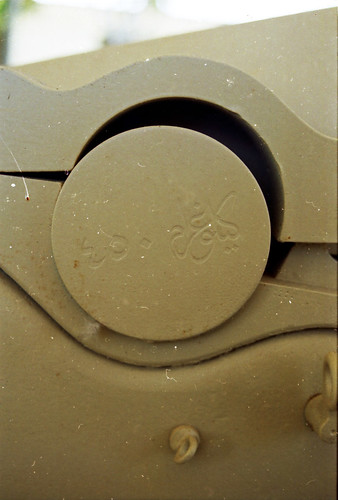 In the late 1860s the famous German steel firm Firma Friedrich Krupp of Essen started using a patented “cylindro-prismatic wedge” (Rundkeilverschluss) breech design for their field guns. With experience gained during the Franco-Prussian War of 1870-1871 the firm was able to refine the design of their field guns and the new line of Rundkeilverschluss guns became one of the most successful black powder breech loading gun designs of all time. Krupp offered the guns in a variety of calibers including 7,5-cm, 8,4-cm, 8,7-cm and 9,3-cm. Hordes of European, African, South American and other countries adopted these guns in various calibers. Most notably in 1873, the Imperial German Army adopted this new design and named it Feldkanone Material C/73 (Model 1873). Field artillery batteries received an 8,8-cm gun, while horse artillery batteries received a lighter 7,85-cm version (Later - post 1888 - the 8,8-cm was used for both services). The C73 was basically a Krupp barrel, but with German Army carriages and limbers.

One of Herr Krupp's oldest and biggest foreign clients, the Ottoman Empire, also imported several guns of this design. The Ottomans ordered the standard export models being, the 7,5cm Krupp: Feldkanone L/27 gun for mounted batteries and the heavier 8,7cm Krupp: Feldkanone L/24 for field batteries. These were all still black powder guns. According to the Krupp archives 893 of the 8,7-cm guns were exported to Turkey:

The batches would not have differed much and were mostly referred to as the Model 1885 in the Turkish Army.

These guns saw active service in the many wars and campaigns the Ottomans fought including the war against Russia in 1877-78, the Greeks in 1897 and the Italians in 1911-12. By 1912 the declining empire still had ninety batteries (540 guns) of both the 7,5-cm and 8,7-cm guns left. During the 1912-13 Balkan Wars more than half of the artillery of the Turkish Eastern Army (around 300 guns out of 550) was lost, as was almost all the artillery of the Turkish Western Army (around 400 guns). The Bulgarian Army alone captured 130 of the 8,7cm guns from the Turks. When WW1 broke out the remainder of these, by now outdated guns, were thrown into the fighting in the Middle East where quite a few were captured by the allies. After WW1 many of the surviving guns were destroyed with dynamite...

Here are some photos from the Krupp catalogues of the time: 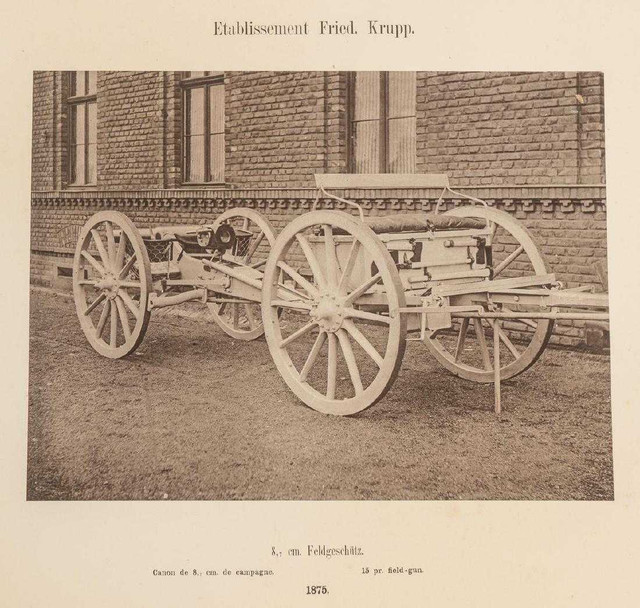 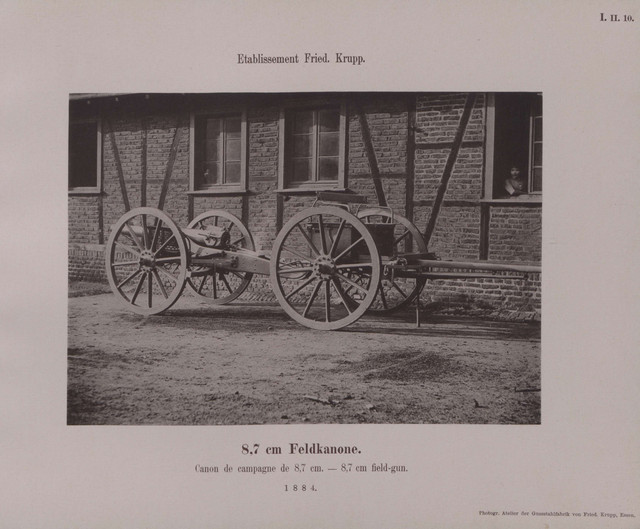 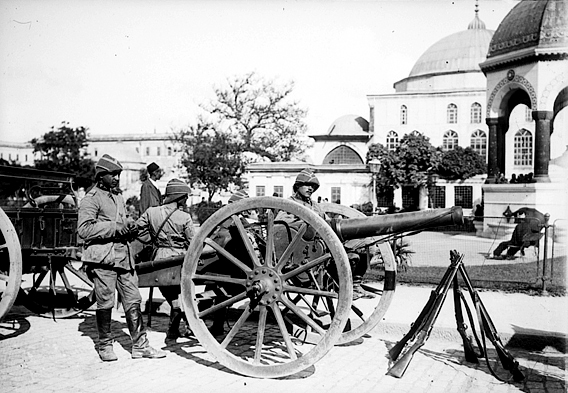 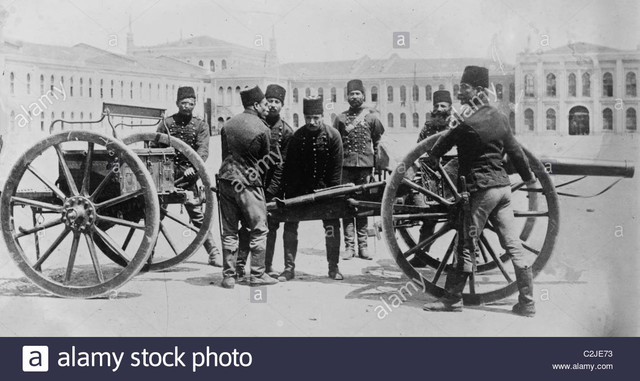 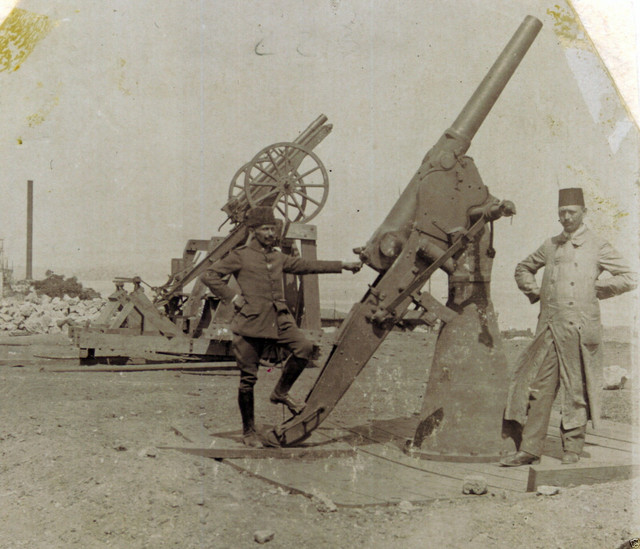 Turkish guns captured by the Bulgarians: 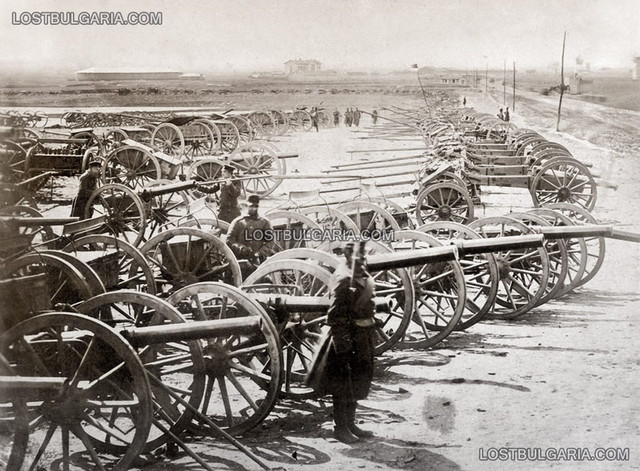 Turkish guns captured by Allies in the Middle East: 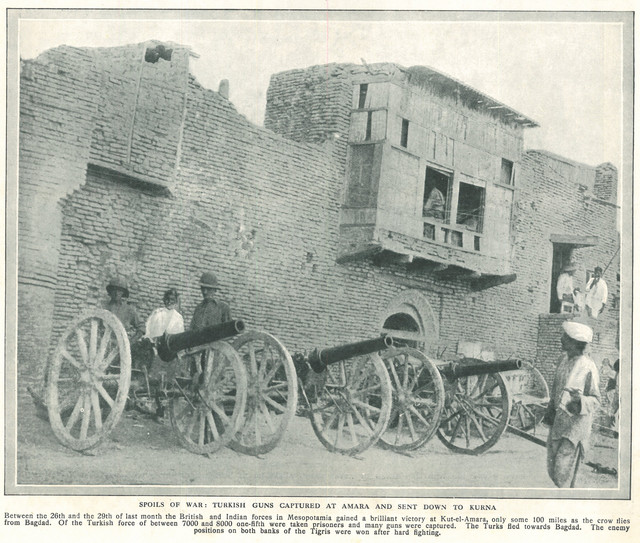 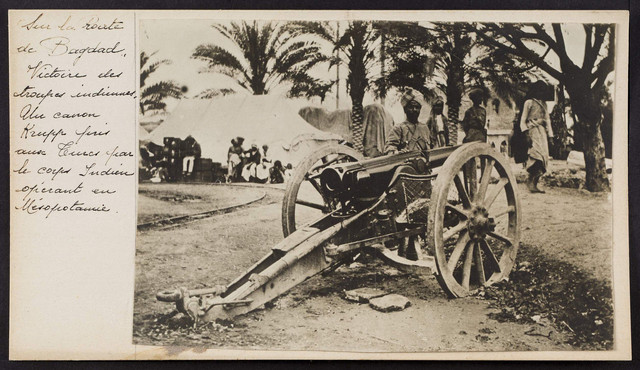 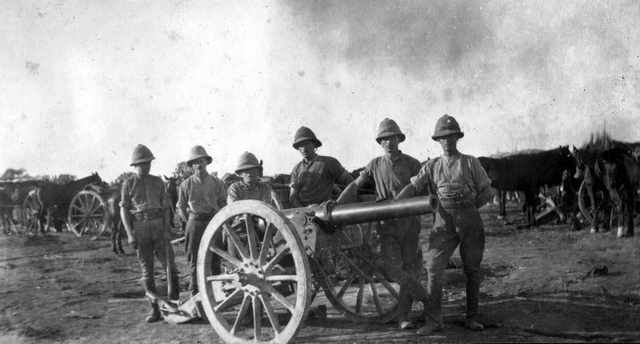 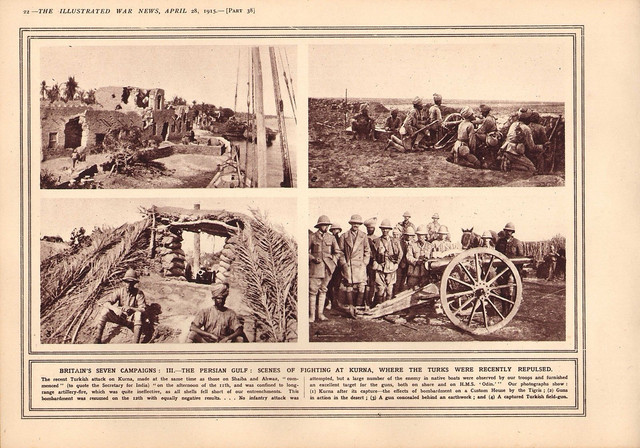 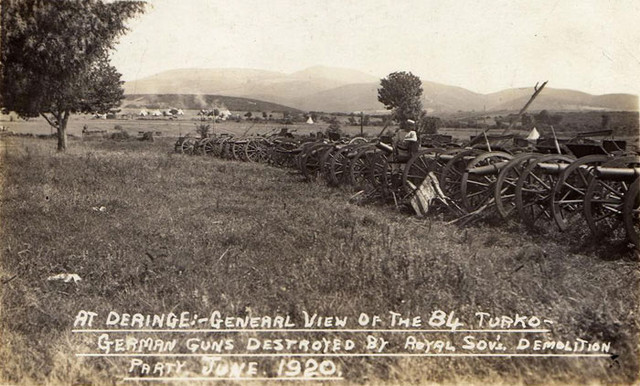 One of the captured 8,7-cm Krupp Feldkanone L/24 guns were given to the South African Museum in Cape Town as a trophy, probably after WW1. It is numbered 656 and dated 1303/1887, making it one of the guns from the last batch. In later years it was moved to Boksburg near Johannesburg where it was mounted in a wall at the Cinderella Prison: 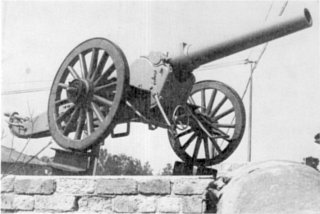 When the prison was closed down in the 1980s, the remains of the gun was sent to the Correctional Services Museum in Pretoria. The museum hoped to have the gun restored, but due to a lack of information and technical drawings this was never done and it ended up in the backyard among the scrap steel of the prison’s workshop, probably destined for the steel smelters... Fortunately it was discovered there by a firearm collector friend of mine, Mr. Cilliers Human (Snr). Because the gun is similar to the 7,5-cm Krupp Feldkanone L/27 guns used by the Free State Artillery Corps during the Anglo-Boer War (1899-1902), Mr Human approached Correctional Services to borrow the relic for use at a Boer War battle centenary commemoration. The Museum agreed and and Mr Human mounted it on ox wagon wheels and transported it down to the battlefield in the Free State. Here in May 2000, I saw the gun for the first time and it has been part of my life since! 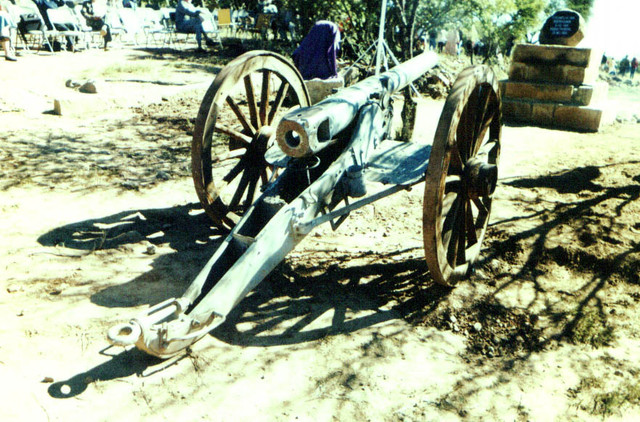 I discussed the future of the gun with Mr Human and offered to start a re-enactment group to assist with the restoration and to man the gun. After we spoke to the Museum they donated the gun to our re-enactment group and restoration started. A year later we started firing the gun at Boer War commemorations all across South Africa: 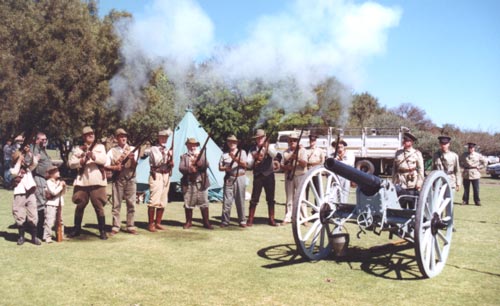 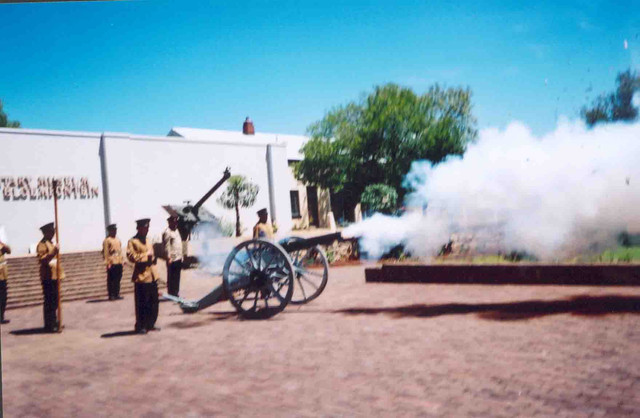 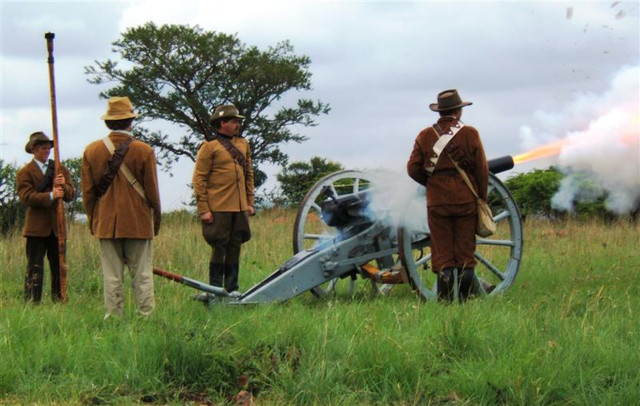 Unfortunately in 2004 South Africa's firearms laws changed radically and it put a stop to our re-enactments. The gun was thus put on loan display at the War Museum in Bloemfontein for several years until 2012 when the gun laws again changed and I was able to move it to my house for a second restoration effort: 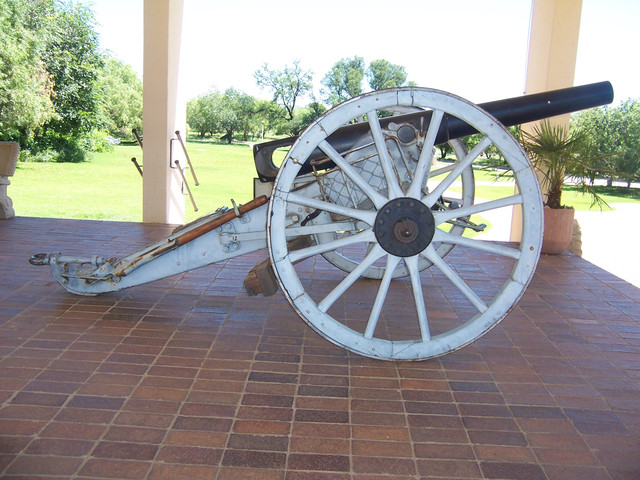 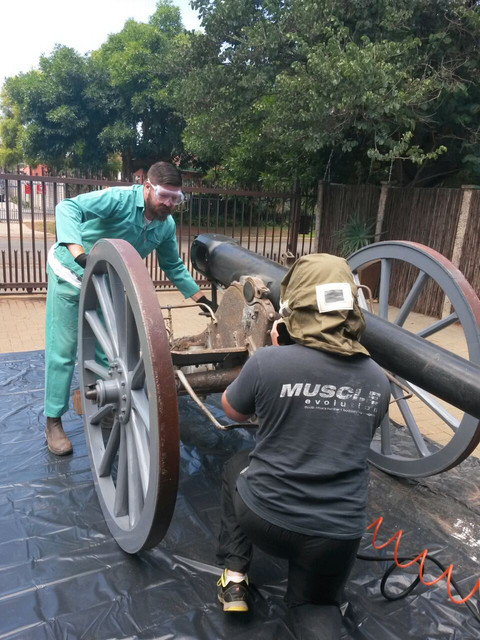 To prevent any further damage to it, it was decided to install the newly restored gun inside the War Museum in Bloemfontein, where it now forms the central piece of a Boer War artillery diorama: 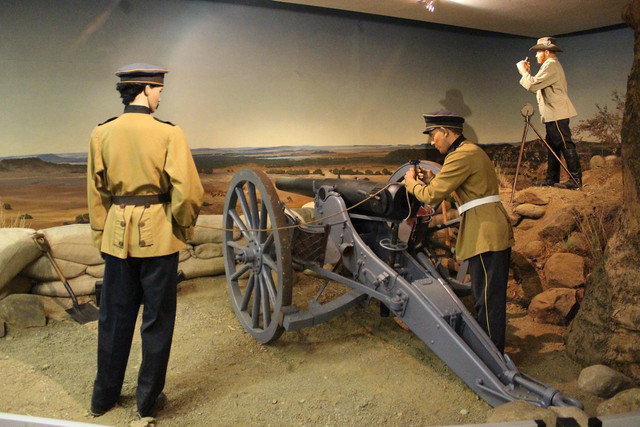 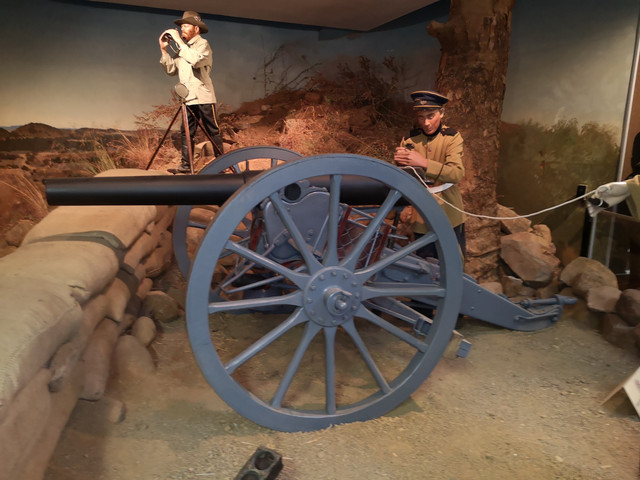 Steve, Aus also received a few of these guns. If I remember correctly Bill Billett listed gun no. 654 or 657 (or some number close to our 656) being in Aus.
Top

The mortar type way back on this thread: viewtopic.php?p=2042425#p2042425 appears to have seen WWI service; eBay auction N:os embedded in pic names. Auction links have expired. IIRC described by the seller as captured French type.

Markus
You do not have the required permissions to view the files attached to this post.
Top

More.
You do not have the required permissions to view the files attached to this post.
Top

More.
You do not have the required permissions to view the files attached to this post.
Top

More.
You do not have the required permissions to view the files attached to this post.
Top
420 posts