Discussions on the final era of the Ottoman Empire, from the Young Turk Revolution of 1908 until the Treaty of Lausanne in 1923.
2 posts • Page 1 of 1


... for Sunni Muslims, approximately 90 percent of the Muslim world, the loss of the caliphate after World War I was devastating in light of the hitherto continuous historic presence of the caliph, the guardian of Islamic law and the Islamic state. Sunni fundamentalist leaders thereafter emerged in nations such as Egypt and India, where contact with Western political structures provided them with a model awkwardly to imitate ... as they struggled after 1924 to provide a viable alternative to the caliphate.... 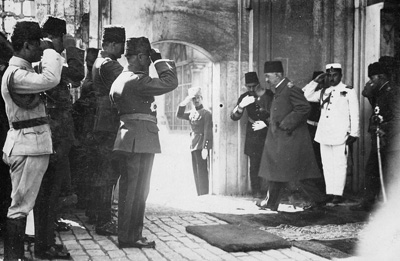 Sultan Vahideddin (Mehmet VI) departing from the backdoor of his Palace in Istanbul. The sombre mood at that moment was caused by the anticipated taking over of power by Ataturk. Few days after this picture was taken, the Sultan was deposed and exiled (along with his son) on a British warship to Malta (Nov 17 1922), then to St.Remo, Italy where he eventually died in 1926. His body was buried in Damascus at the courtyard of Tekkya of Sultan Suleiman. Ismet Inonu, who succeeded Ataturk as president of Turkey, can be seen in his white uniform saluting the Last Sultan.

"The deposed Sultan, Mohammed VI, appointed a delegation of nine to accompany him to Lausanne, where he intends to plead the cause of Islam against the Kemalists. He has left Mecca in the Hedjaz, where he was the guest of King Hussein, and is now en route for Switzerland.

Islam is very active. A movement is on foot to reestablish the Caliphate at Bagdad. A Pan-Islamic conference to determine the character of the Caliphate (in which King Feisul of Iraq, King Hussein of the Hedjaz and delegates from India, Algeria and Egypt will take part) is to be held at Damar (Arabia) in the near future. The ex-Sultan considers himself both Sultan and Caliph and has a large following in the Islamic world, particularly with regard to his claim to the Caliphate. According to Mohammedan law it is impossible for two Caliphs to exist at the same time. The ex-Sultan never gave up the Caliphate, but was forced out by the Kemalists. His partisans, therefore, charge the Kemalist movement with irreligious acts.

Mohammed was born on January 27, 1861, a, son of Sultan Abdul Medjid, and succeeded to the throne on the death of his elder brother, Mohammed V, July 3, 1918. On November 3, 1922, he was dethroned by the Kemalists, who declared an end to the Ottoman Empire and elected Abdul Medjid Effendi, cousin of Mohammed and heir to the Sultanate, to the Caliphate. The ex-Sultan then made his escape on a British warship and was later landed at Madeira, whence he accepted the hospitality of King Hussein. In the confusion of his flight he was compelled to leave his harem in Constantinople."

Mavi Boncuk which I introduced in this forum gives always useful information about Turkish present and past life. But this time It gives wrong information to the reader. I will write to the redaktion for that.
Quatation:
"Few days after this picture was taken, the Sultan was deposed and exiled (along with his son) on a British warship to Malta (Nov 17 1922), then to St.Remo, Italy where he eventually died in 1926. His body was buried in Damascus at the courtyard of Tekkya of Sultan Suleiman. Ismet Inonu, who succeeded Ataturk as president of Turkey, can be seen in his white uniform saluting the Last Sultan. "

Wrong because:
1-Ismet Pasha (President Inonu) was the 3rd strong man of the Turkish National Forces in 1923. He was never ordered to go to Istanbul and salute the late Sultan in 2nd row during his departure like a crook. He was the victor.
2-This photo must be shoot in 1919 just before Ismet joined to Mustafa Kemal Pasha.
Top
2 posts • Page 1 of 1