Discussions on the final era of the Ottoman Empire, from the Young Turk Revolution of 1908 until the Treaty of Lausanne in 1923.
13 posts • Page 1 of 1


In spite of all this political infighting and the rising tensions of the past months,it came as a complete surprise to Unionists and foreign observers alike, when, on the night of 12/13 April 1909 an armed insurrection broke out in the capital in the name of the restoration of Islam and Shana. Within twenty-four hours the insurgents took over the capital without meeting significant Opposition from government, C.U.P. or the Army. In the capital, the Committee seemed vanquished, but its position in the provinces, most of all in Macedonia, remained intact and within a fortnight troops loyal to the C.U.P. suppressed the counterrevolution and re-established the Commitee in power.


In April 1909 Constantinople was captured by Macedonian troops under the command of the Young Turks. The sultan, Abdul Mamit, was deposed and replaced by Mehmet V and the parliament and constitution were restored....It appears that the "capture" was relatively easy but there was firing in Pera and Taksim, the section of the city were the Azarians lived. 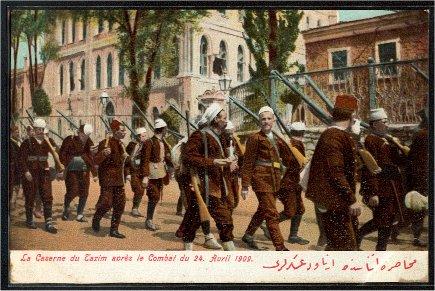 ..leading officer in CUP (Young Turks) with other soldiers at Taxim barracks - previously captured from the soldiers of the deposed Sultan Abdulhamid II during the April revolution by the Young Turks which resulted in the installation of a new Sultan - Mehmed V

The counterrevolution was crushed by Hüseyin Hüsnü and his Hareket Ordusu (Action Army).Mustafa Kemal "was at his side".


Has anyone got details on Hüseyin Hüsnü?
Top

Müşir Hüseyin Hüsnü Pasha (Istanbul 1850- Istanbul 1926) After graduating the war school the Harbiye he fought at 1877-78 Turco-Russian war. After the war Sultan Abdülhamit arrested him and transported to karaman in middle Anatolia accusing him a member of İttihad ve Terakki (Uniaon and Progress) Party. After the decleration of Mesrutiyet the soverignety he was send to 3rd Army in Selanik. on April 13th 1909 the hunter battalions in Istanbul revolted againts all modern reforms made by Mesrutiyet.(Turkish time: March 31th 1325) For that reason our historians call this eveny "The Event of March 31st. To cruss this revolt the Army at Selanik under command of Hüseyin Hüsnü Pasha moved to Istanbul. Mustafa Kemal was chif of staff. Just before the army entered to Istanbul Huseyin Hüsnü pasha left the command to Mahmut Sevket Pasha from Bagdat. The Army crused the revolt hanging many of them.
Hüseyin Hüsnü Pasha was alo governer in Libya. After the WW1 he was arrested and put again in prison. He was released by the help of national Forces and joined to Mustafa Kemal.


Julien Dietrich or as in French Charles de Troit was borned Alsas-Loringen at French-German Border. His father was Karl Dietrich. Julien enlisted to French navy. During a visit to Istanbul he escaped from the ship and enlisted to Sultans Army. He was 17 years old. Sultan Abdülmecit took him in his own protection and orders Foreign Minister later Grandvezier Ali Pasha to adopt him..Julien converted to islam and got the name Mehmet Ali.

After graduating the War School the Harbiye Mehmet Ali served among the ranks of Ottoman Army. He was a clever man. In a short time he was made Müşir (Marchall). He presented Ottoman Empire during Berlin congress which took part after Turco-Russian war with Aleksandros Karatodori Paşa During the Albanian Revolt in 1878 with 49 years of age he got killed.

The Monument of Liberty


At the monument, the 74 soldiers killed in action of the 31 March Incident were initially buried with a state ceremony on July 23, 1911.

Remains of four high ranked officials of the Ottoman Empire were buried here later on as well:

Ahmet Şefik Mithat Pasha, a leading member of the Committee of Union and Progress died in exile in Taif, Arabia
Mahmud Şevket Pasha, commander of the Hareket Ordusu (The Army of Action), which put down the rebellion, and Grand vizier assassinated in 1913
Mehmed Talat Pasha, former Minister of War and Grand vizier assassinated in 1921, whose remains were brought in 1943 from Berlin, Germany
Enver Pasha, high ranking military officer and a leader of the Young Turk revolution, killed in action in Russian Turkestan, whose remains were brought 1996 from Ab-i Derya, today Tajikistan Not 100% sure, but that's not Yildiz Kiosk, but Yaveran Kiosk - though both are located in Yildiz Palace.
Top

Yaveran Odaları: The rooms of the Adjutants (fourth image) by Raimondo d'Aranco


In the meantime, Mahmud Shawkat Pasha’s assassination was used by the CUP to crush the Liberal opponents in İstanbul. Prominent Liberals held responsible for plotting the grand vizier’s murder were rounded up and court-martialed, and 350 were exiled to Sinop in the central Black Sea region. The execution of twelve opponents of the CUP in İstanbul, now under Cemal Pasha’s military governorship, coincided with the closing day of the Arab Congress. The executions eliminated the Liberal opposition in the capital.... The purge of the leaders of the opposition was a clear sign that politics as usual would be curtailed.

The Galata Bridge (in Turkish Galata Köprüsü) is a bridge that spans the Golden Horn in Istanbul, Turkey. From the end of the 19th century in particular, the bridge has featured in Turkish literature, theater, poetry and novels.

The oldest recorded bridge over the Golden Horn in Istanbul was built during the reign of Justinian the Great in the 6th century AD close to the area near the Theodosian Land Walls at the western end of the city. In 1453, during the Fall of Constantinople, the Turks assembled a mobile bridge by putting their ships next to each other and used it for transporting their troops from one side of the Golden Horn to the other.

In the years 1502-1503 plans to construct the first bridge in the current location were discussed. Sultan Bayezid II solicited a design and Leonardo da Vinci, utilizing three well-known geometrical principles, the pressed-bow, parabolic curve and keystone arch, created an unprecedented single span 240 m long and 24 m wide bridge for the Golden Horn, which would become the longest bridge in the world of that period if constructed. However, the ambitious design did not meet with the Sultan's approval. Another Italian artist, Michelangelo was also invited to design a bridge for Istanbul. Michelangelo rejected the proposal, and the idea of building a bridge across the Golden Horn was shelved until the 19th century.

A smaller scale version of Leonardo da Vinci's Golden Horn Bridge was brought to life in 2001 near Oslo, Norway by the contemporary artist Vebjørn Sand, the first civil engineering project based on a Leonardo da Vinci sketch to be constructed. The Leonardo Bridge Project hopes to build the design as a practical footbridge around the world, including the Golden Horn in Istanbul, using local materials and collaborating with local artisans as a global public art project. The Wall Street Journal referred to the Project as a "...logo for the nations."

In the early 19th century Mahmud II (1808-1839) had a bridge built at some distance up the waterway between Azapkapi and Unkapani. This bridge, known as the Hayratiye (Benefaction in English), was opened on September 3, 1836. The project was carried out by Deputy Lord High Admiral Fevzi Ahmet Pasa using the workers and facilities of the naval arsenal. According to the History of Lutfi, this bridge was built on linked pontoons and was around 500 to 540 m long.

The first Galata Bridge at the mouth of the waterway was constructed in 1845 by Valide Sultan, the mother of Sultan Abdulmecid (1839-1861) and used for 18 years. It was known as the Cisr-i Cedid or New Bridge to distinguish it from the earlier bridge further up the Golden Horn, which became known as the Cisr-i Atik or Old Bridge.

On the Karaköy side of the bridge, there was an inscription as a couplet by poet Sinasi saying that the New Bridge was built by Abdulmecid Han. First to pass over the bridge was Sultan Abdulmecid, and the first to pass below it was the French captain Magnan in his ship the Cygne.

For the first three days crossing the bridge was free, after which a toll known as mürüriye was paid to the Naval Ministry. Toll collecting started on November 25, 1845 and the toll was charged:

Toll was collected until May 31, 1930 by officials in white uniform standing on both ends of the bridge
This bridge was replaced by a second wooden bridge in 1863, built by Ethem Pertev Pasa on the orders of Sultan Abdulaziz (1861-1876) in readiness for the visit of Napoleon III to Istanbul.

In 1870 a contract was signed with a French company, Forges et Chantiers de la Mediteranée for construction of a third bridge, but the outbreak of war between France and Germany delayed the project, which was given instead to a British firm G. Wells in 1872. This bridge, completed in 1875, was 480 m long and 14 m wide and rested on 24 pontoons. It was built at a cost of 105,000 gold liras. This was used until 1912, when it was pulled upstream to replace the now genuinely old Cisr-i Atik Bridge.

The fourth Galata Bridge was built in 1912 by the German firm MAN AG for 350,000 gold liras. This floating bridge was 466 m long and 25 m wide. It is the bridge still familiar to many people today that was badly damaged in a fire in 1992 and towed up the Golden Horn to make way for the modern bridge now in use.

The fifth Galata bridge was built by the Turkish construction company STFA exactly on the same place of the previous bridge, between Karaköy and Eminönü, and completed in December 1994. It is a bascule bridge, which is 490 m long with a main span of 80 m. The deck of the bridge is 42 m wide and has three vehicular lanes and one walkway in each direction. It has also recently had tram tracks added to it, allowing the Istanbul Tram to run from the suburbs near Ataturk International Airport to a few blocks before Dolmabahçe Palace.

The Galata Bridge was a symbolic link between the traditional city of Istanbul proper, site of the imperial palace and principal religious and secular institutions of the empire, and the districts of Galata, Beyoğlu, Şişli and Harbiye where a large proportion of the inhabitants were non-Muslims and where foreign merchants and diplomats lived and worked. In this respect the bridge bonded these two distinctive cultures. As Peyami Safa said in his novel, Fatih-Harbiye, a person who went from Fatih to Harbiye via the bridge set foot in a different civilization and different culture. Apart from its place in fiction, the romantic appearance of the Galata Bridge made it a subject of many paintings and engravings.

All daily city tours in Istanbul include this bridge as it is the passageway to the Old City of Constantinople.
Top
13 posts • Page 1 of 1