Discussions on the final era of the Ottoman Empire, from the Young Turk Revolution of 1908 until the Treaty of Lausanne in 1923.
9 posts • Page 1 of 1

What is the helmet worn? 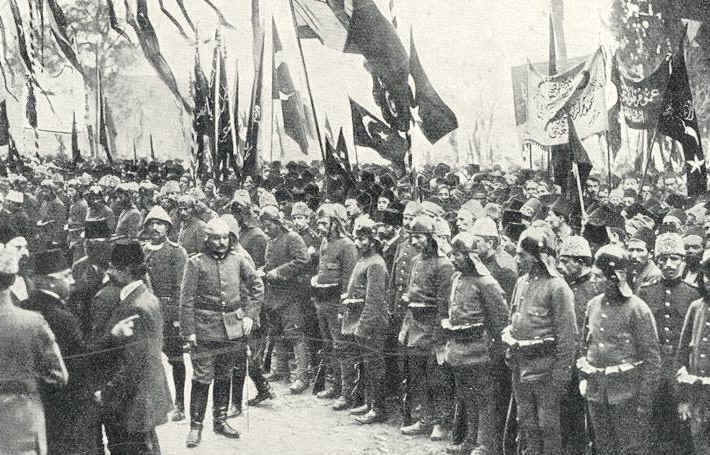 These are the infantrymen of Istanbuli fire brigade. These military firemen were not only used to fight fires in the capital but were sort of elite units.

After the proclamation of Constitution II in 1908, Gendarmerie achieved great successes, particularly in Rumeli. For this reason, the organization was restructured in 1909 and was affiliated to the Ministry of War, and its name was changed as Umum Jandarma Kumandanlığı.

Gendarmerie units both sustained their internal security duties and took part in the national defence at various fronts as an integral part of the Armed Forces during the World War I, starting in 1914 and ending in 1918, and the War of Independence, starting in 1919 and ending in 1922. The bravery and successes the Gendarmerie units had in those wars deserve every tribute and praise.

The monument and graveyard built in memory of the martyrs of Bursa and Gelibolu Mobile Gendarmerie Battalions who died in Çanakkale Battles.

After the foundation of the Republic on October 29, 1923, the Gendarmerie organization was, like other public institutions, subjected to reorganization activities within the framework of a plan.

Gendarmerie NCO School, which was closed down in 1918, was re-opened in İzmit. Fixed Regional Gendarmerie Inspectorates and Provincial Gendarmerie Regiment Commands were reorganized and Mobile Gendarmerie Units were strengthened.


Monument to the Gendarmerie Battalions at Suvla Bay:

Just at the back of 3 gentlemen wearing Fes we can see a military police man, the" inzibat" or "kanun neferi" with his german iron badge on his chest.

Second man on right with a kalpak and 5 bright buttons is a police man.
Top

What I remember reading is that before the WW1 the Jandarma units were reorganized and trained by French military mission (as the army was trained by German and Navy by British mission).

During the war-time the control of Jandarma was given to War Minister. Many Jandarma units were well trained and were used in battles as a regular army units (in Gallipoli etc.)

The Gendarmes in Macedonia in 1904 were "retrained' by foreign officers under the Mürzsteg Accord.

The 48 officers dispatched to the Macedonian region did however give the Christian population a minor sense of security. The police reforms did improve the quality of the gendarmerie. The actual Western officers in the field carried out their mission in good faith, in spite of its ambiguous and complex character of their mandate. However, they continued to meet with obstruction from the Turkish officials.

The Turkish officials continued to oppose the reforms through obstructionism and delay, through passive resistance and through general inertia. The Sultan, Abdul Hamid, refused to accelerate the pace of the reforms and did everything to discourage their implementation. At first, he believed he could wait out the reforms by employing stalling and delaying tactics. Turkish officials sought to intimidate and pressure Christians from making complaints and from voicing their grievances to the officers. Turkish officials showed bad faith at every turn.

There were, however, exceptions. Some of the best cooperation came from Ottoman officials who were not natives of the Balkans and who could thus act more impartially. The vali of Kosovo, Mahmoud Chevket Pasha, was a native of Baghdad; he actively supported the reforms, as did the commander of the Skopje zone, Osman Fewzi Pasha, a Tartar.

The problem with the reforms was that 48 international officers were an inadequate number to monitor the huge area of the three Macedonian vilayets. The Turkish government kept the number of the reorganized gendarmerie intentionally low to minimize their impact and effectiveness.

The introduction of Christians in the gendarmerie, one of the stipulated reforms, was generally not successful. They were undisciplined and unpopular in both Muslim and Christian areas. They were seen as traitors and lackeys by the Christians, and were despised by Muslims who detested the thought of letting Christians controlling them. They were said to be lacking in “moral value” and “political conviction.” In 1907, the fifth year of the reform programme, they made up only 10 percent of the gendarmerie. Christians also were issued gun licenses infrequently, while Muslims were well-armed and carried firearms openly. The reforms did not prevent abuses against Christians or ensure their safety. The abuses of the gendarmes were, however, lessened due to the reforms...By September of 1909, the Mürzsteg Reform Plan was officially dead.