Discussions on the music in the Third Reich. Hosted by Ivan Ž.
131 posts

Do you mean Flutes or Fifes? I thought with military infantry musicians, not bandsmen, each company was assigned 2 drummers and 2 fifers. The first band shown in Triumph of the Will is the infantry Fife and Drum corps correct? In a band Flutes and Fifes were used, but were flutes also used in the infantry music?

dixiedrummer wrote: Do you mean Flutes or Fifes? I thought with military infantry musicians, not bandsmen, each company was assigned 2 drummers and 2 fifers. The first band shown in Triumph of the Will is the infantry Fife and Drum corps correct? In a band Flutes and Fifes were used, but were flutes also used in the infantry music?

Nice to find someone else into drums and flutes

Technically we are both right as the fife is a keyless flute and the German infantry used a keyless flute up to 1945 and in the NVA as long as that body existed. A very good friend of mine has a collection of these. They are all wood or plastic imitation wood such as ebonite. The Bundeswehr switched to rather cheap and nasty looking metal keyless flute with plastic finger holes (they may even have gone to a one keyed flute). The flutes were all of one type so the music was usually melody line only, although there were some very good two part pieces.. There was a rich heritage of flute and drum marching music in the German forces which has been largely lost as it was seldom if ever recorded.

The German flutes/fifes also have less finger holes than the ones used by many US flute bands.Flute Bands in the British Army use keyed wooden flutes, as did, uniquely in the US forces, the 4th Marines.

The flutes in the band in those days in Germany were keyed wood/imitation wood versions of concert flutes and, incidentally, the clarinetists used two-piece "military" clarinets (which were used also in the British Army up to at least the fifties). These helped to contribute to the special sound of bands of this period.
Top

...the information provided here by 'Tintin1689' is certainly very knowledgeable and informative...

...I wonder if those who are interested in the placements of individual 'musiker' within a 'musikkorps', etc, know about this book:-

...below is a link to a copy already sold by USM Books....I have seen it available on other book sites, with different printing dates but all within the 3rd Reich period. Prices vary, usually around the 100 Euro (plus!) mark...

...it certainly appears the kind of book to help answer some of your questions...

That is an interesting book, isn't it? Thanks for the link. I will keep an "eye out" for other examples.

LSSAHMusikkorps.jpg
You do not have the required permissions to view the files attached to this post.
Top

LSSAHSpielmann.jpg
You do not have the required permissions to view the files attached to this post.
Top

Thank you for the photos! 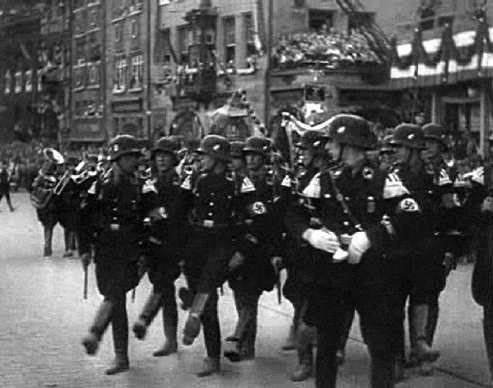 mty wrote: The NCO leading the bugler squad might be Gustav Weissenborn since he was the deputy of Müller-John as LSSAH band leader.

The NCO is perhaps Tambourmajor Herbert Borngräber. Born in 1911, he entered very early the Leibstandarte. My only problem is that in 1944, when he was killed near Rethel on transport to the Normandy front, he was Hauptscharführer while on this photo he is already Oberscharführer.
Top

Do you have photo of Borngräber? His name is completely new to me. It is not mentioned in the otherwise very comprehensive (and perhaps the only title in English of this subject) work of Brian Matthews.

I think the SS-Hstuf. is Müller-John in the mid-30's. He seems to have LSSAH cufftitle and his face is quite similar. What do you others think?

MilMusik1.jpg
You do not have the required permissions to view the files attached to this post.
Top

mty wrote: I think the SS-Hstuf. is Müller-John in the mid-30's.

Unfortunately I dont have any photo of him. I simply know from my father who was a friend of Borngräber in Berlin that he was Tambourmajor of the Leibstandarte. Unfortunately my father passed away several years ago, so I can no more show him the extract of Triumph of the Will in order to ask him if its definitely him. The wife of Borngräber passed away too, so no means either to ask her. As long as I know they had no children and I dont know if his sister is still alive, but I doubt.
Top

Does anyone know the name of this SS-Oberscharführer conducting the LSSAH band - and also the year when the photo was taken? Maybe 1940?

Complete photo (notice the LSSAH kettle and bass drums on the left):

Thanks in advance,
Ivan
You do not have the required permissions to view the files attached to this post.
Top

I think you´re right. His garrison cap is an old SS-VT type and I think he has bevelled old Prussian style lower pockets.
Top

Thank you for the fast reply Pavel.

Has anyone found a possible name of this NCO maybe? I know simple NCOs are not as known as many SS officers today, but he is a bandleader in a probably most researched SS unit, so I'm hoping his name might have been mentioned somewhere (but I'm referring only to reliable documents)...

Excuse me, but does anyone have any more pictures of Leibstandarte-SS Musikkorps, escpecially in their black uniform?