Discussions on the vehicles used by the Axis forces. Hosted by Christian Ankerstjerne
11656 posts

I'm starting to think that Kerry's original Horch idea was correct. IMO the car wing lines are much closer to this Horch 830 BL 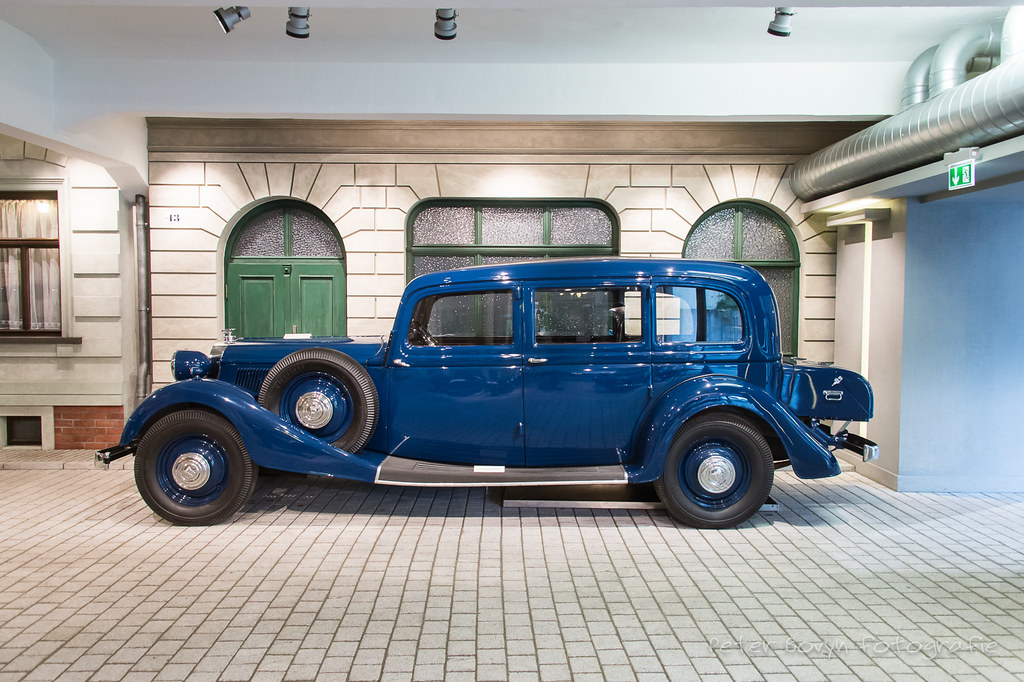 than either 3,2 or 3,4 litre stock Mercedes 320. And Horch was also a big fan of those front wing lights that Kerry's Kübel sports.

You could be right. The different wing lines are very important for an ID of this car. Interesting, that Befehl 227 posted a pic of a Horch type 830 BL Kübelwagen 3rd September 2009. It is a pity, that we cannot see the wing lines of this car.

Sometimes these mysteries seem to take a lifetime to unravel and even then we are not always sure.

Part of that time was spent in looking through my book collection, which gathers a lot of dust these years.
Once I found a possible answer, the rest of the time was spent trying to get my copy machine to function in "scan" mode, something
it has not done much these last years.

In any case, I present below a photo from the book "Kraftfahrzeuge und Panzer der Reichswehr, Wehrmacht und Bundedswehr" by Werner Oswald.

It shows a Horch 830 BL which appears to be based very closely on the civilian version of the 830 than a more "militarized" version.

From front to back, it has a civilian type front bumper, not found on the strictly military versions. It has the headlamps mentioned by Markus, definitely civilian type. The wings/mudguards, both front and rear appear to be used directly from the civilian chassis, exactly as Kerry's example.
As well, the radiator emblem seems to remain, not seen on military versions of either Horch or MB.

Finally, the tyres seem to be of a civilian type, not military on my example and Kerry's.

Brilliant work, Bill! No doubt about it.
Cheers,
Max
Top

Partly in jest I mentioned Horch, but now it does seem to be going that way. I am guessing that not many of the Horch 830 BL kubels were made? The wheels rims and hub-caps do look more of the Horch style, plus the button-down hood and rear deck cover also matches the Werner Oswald scan.
Thanks to you all for the on-going research, another example of why this forum works so wonderfully.
Best regards,
Kerry.
Top

yes, an excellent work. In any way better than me. I was near to find this pic, too. My fault was, that I was looking in an older edition of the book "Kraftfahrzeuge und Panzer der Reichswehr, Wehrmacht und Bundeswehr" by Werner Oswald (I have three of them), where I scanned the pic of the Mercedes-Benz type 340 because of the better quality of the pics.

Hi Friends!
maybe Mercedes model ???
You do not have the required permissions to view the files attached to this post.
Top

I somehow get a Komnicky feeling; The suspension etc. forward equipage seem to have a family resemblance with this 2 T:

unexpected answer!
Komnick I had not considered.
Тhank you Markus!
Top

Hi all,
WW1 isn't my theme definitely so call it plain curiosity. What this dinosaur captured at Dunkirk could be? Apparently French, but what? I'm not much into the picture with the wheeled boilers of that era.

TIA!
"...and on the 8th day He made truck so that man, made on 7th day, had shelter when woman threw him out for the night."
Top

it looks like a Dion Bouton to me
1915_De_Dion-Bouton_Lorry.jpg
Dirk
You do not have the required permissions to view the files attached to this post.
Top

Hi Friends!
your opinion?
You do not have the required permissions to view the files attached to this post.
Top

Cheers!
"...and on the 8th day He made truck so that man, made on 7th day, had shelter when woman threw him out for the night."
Top

Thank you for your answers, Markus...and sorry for delay...