Discussions on all (non-biographical) aspects of the Freikorps, Reichswehr, Austrian Bundesheer, Heer, Waffen-SS, Volkssturm and Fallschirmjäger and the other Luftwaffe ground forces. Hosted by Christoph Awender.
3302 posts

well histan, the allies knew about every major german movement and deployment of forces since Enigma, so im not surpised. not really.

This is an invention from the Bletchley Park lobby .
Top

„The difference was not, as many have supposed, that the Waffen SS was composed largely of active Nazis. On the countrary, the available evidence indicates that the great majority of the most active Nazis - members of the NSDAP, the SA, the Allgemeine SS and the Hitler Youth - performed their military service in the Wehrmacht.
…
And yet there can be little doubt that the Waffen SS possessed a distinct character, one that served to set it apart from the Army. Eugen Kogon, in his pioneering study „Der SS Staat“, offers a valuable insight into this character:“There was much naive and boyish idealism in the ranks of the Waffen SS, coupled with a savage soldier of fortune spirit.“ Most Waffen SS men, Kogon believes, „knew little or nothing concrete about the SS superstate or about SS aims.“ They limited themselves to „the relation of a single SS ideal - a tough recklessness. To them this was the epitome of the SS.“

With the proviso that this „tough recklessness“ and „savage soldier of fortune spirit“ had a marked National Socialist hue, Kogon’s interpretation rings true. Few of the men in the Wffen SS were old enough to have had any personal contact with the post-World War I Freikorps movement, yet it was the spirit of this movement, its nihilism and elitism, which perhaps comes closest to that of the Waffen SS.

The most important popularizer of this spirit was the German poet and novelist Ernst Jünger, who in 1919 wrote of a „new man, the storm soldier, the elite of central Europe. A completely new race, cunning, strong and packed with purpose… battle proven, merciless both to himself and others.“
Jünger’s warrior was only a figment of his imagination: but he might well have been describing the model SS officer, the ideal of the Junkerschulen (Cadet Schools) of the Waffen SS.“

Books like this give a valuable insight into the core of the legend.

There is nothing in that to explain "why the SS legend was born".
Top

Simple answer to this question: When people think of the Waffen SS they will imagine something like this. Good looking boys with cool uniforms who carelessly smoke some cigarettes during the fightings. 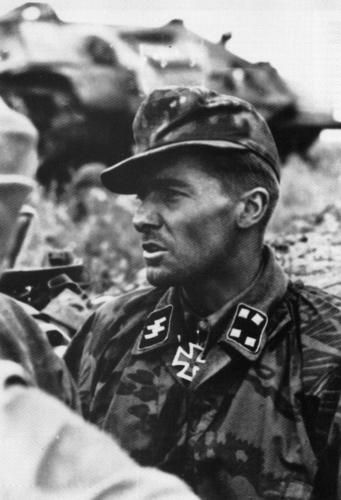 It is of course no surprise that Peiper was (and is) one of the most popular Waffen SS commanders. Good (but still innocent) looking, always ready for combat.

Yet, when people will see photographs of SS-men like this their response will probably be different:

When I saw this picture for the first time I responded in disgust and was thinking of pure evil. Still, it is not certain that Peiper was a much better man than Kaltenbrunner. (Who was, of course, a horrible man.)
Top

A few acquaintances who served in the Luftwaffe were at dieppe, and whenever asked about it, they just said, 'so what?' It just wasn't a big deal for them. Both emigrated ... one stayed in Kanada and became a Canadian citizen, and the other went to the US and became a US citizen. I forget their names.
Top

Exactly - the W-SS cult of today is ultimately based on wartime propaganda, filtered through sanitized and self-promoting post-war W-SS memoirs and unit histories, exploited by a sales hungry, largely English-language, publishing and media industry, and lapped up by large numbers of naive readers, some of whom are so lacking in critical faculties that they become W-SS groupies and even apologists!

Now that we know the facts, only an idiot or the willfully blind would still believe it all.

Where the Waffen-SS was good was in exactly the areas where it inherited qualities from the German Army - armoured and motorized formations. Nobody ever claims, or reasonably could, that any W-SS non-armoured or motorized formations displayed any outstanding qualities. There was no magic Waffen-SS military fairy dust that could make a silk purse out of a sow's ear!

The propaganda aspect of the WSS over, say, the Heer comes across as exaggerated to me. I have seen all the wartime newreels hosted on youtube and haven't seen a huge emphasis on WSS over the Heer.

AT the core, there's elements of "Greek Tragedy" and the "Heroes' Journey" (story structure in literature and screenplay writing) that fuel the general interest of the Third Reich (including Wehrmacht, luftwaffe, and WSS) and give it high entertainment value.

A good example of this is the Godfather I and II, Silence of the Lambs, & the King Henry stories. In the Godfather trilogy, you have Mario Puzo and Coppola succeed in humanizing high level criminals by revealing a full spectrum and depth of their personalities. A lynchpin of the writing was their heroic traits and a sense of honor possessed by the Corelones'- however twisted it may have seemed in an atmosphere where most people would consider horrific evil. In cinema, this was largely unprecedented; Gangsters were depicted in a one-dimensional fashion prior to this.

In "Silence of the lambs", you have a lunatic, a serial killer that could be empathized (not sympathized with, a different emotion) with in some level (Hannibal's civilization, genius, courage, decisiveness, ability, etc.) in a similar story-telling fashion. Stories, are after all, structure that aim at speaking deeper truths.

The Nazis, WSS, and german military possessed some heroic traits, abilities, and a twisted code of honor in abundance yet had it juxtaposed with a mountain of contradictions and flaws. Like Icarus, they overreached in their evil aims and fell. With Waffen SS you have something of a tip of the spear for people interested in 44/45. This is not surprising to me that a publisher came up with the name "Hitler's Samurai"- people are interested in the Samurai despite their oppressive and savage aspects.

Parker's book on Peiper echos an understanding of this- perhaps Peiper is Michael Corelone of the WSS?

You write, "The propaganda aspect of the W-SS over, say, the Heer comes across as exaggerated to me. I have seen all the wartime newsreels hosted on youtube and haven't seen a huge emphasis on W-SS over Heer."

This implies that you have seen some "emphasis on W-SS over Heer".

Given that the Heer mobilized some 20 times as many men as the W-SS, and that the W-SS made no indispensable contribution to any of Germany's conquests, this looks very much like a considerably exaggerated emphasis on the W-SS compared with the Heer, even by your terms of reference.

I am not sure I fully follow the film analogies, but I think you have a valid point in writing "The Nazis, W-SS, and German military possessed some heroic traits, abilities and a twisted code of honour in abundance....." These are traits shared, I would suggest, by the likes of the Confederate States, or Rhodesia. As 1066 and All That described the Cavaliers in the English Civil War, they pulled off the trick of being simultaneously "Wrong but Wromantic" in some unaccountable way.

There is little more romantic, at least to an immature teenage mind, to going down fighting against overwhelming odds in a hopeless cause beside your comrades. I was drawn to serve in Rhodesia at least partly by similar irrational feelings. However, I am now in my sixties and like to think I have a more mature and detached view today.

We should not forget that most of the soldiers that joint WSS in 2nd half of the war weren't volunteers....

As even my granddad (that I never met) was subordinated being a Luftwaffe technican to the WSS....there were not enough planes to work on anymore in 1945....

Yup. In the Baltic States and amongst the Balkan Volkdeutsch they were mostly conscripts by then, and how voluntary the enlistment of many German youths was in 1943-44 is somewhat questionable. There were certainly genuine volunteers amongst them, but also "volunteers".

After Himmler took over the Ersatzheer the youth was mainly 'volunteered'....

There is nothing in that to explain "why the SS legend was born".


I think this is a hasty conclusion. Try to read it slowly again and ponder over it quietly. All the ingredients of a macho military cult are there.
Top

Der SS Staat is good for under the bus , and people have proved that you used the Eisenhower remarks out of context.

These are not arguments, but just ranting.

An unbiased contemporary, the author of the SS Staat understood very well the mechanism of the legend. Efforts of deconstruction 70 years later are ridiculous.

As for Eisenhower: desperate last standings are celebrated and become a legend in most armies. The last standing of your buddies is an admirable act of heroism, that of your foes is foolish recklessness. Even if Eisenhower disapproved of the fight of SS units to the last man, AS USUAL means that it was part of their reputation. This is exactly one of the aspects on which their ruthless, reckless, gung-ho badass legend was built, and this is the subject of this topic. You do not have to approve the acts of a legendary person: an evil monster can be a legend too.
Top

praetorianavis wrote: ↑
15 Dec 2018 10:16
Even if Eisenhower disapproved of the fight of SS units to the last man, AS USUAL means that it was part of their reputation. This is exactly one of the aspects on which their ruthless, reckless, gung-ho badass legend was built, and this is the subject of this topic. You do not have to approve the acts of a legendary person: an evil monster can be a legend too.

This should interest you. Definitely superior to the older stuff :

They were no more likely to fight to the last man than Army combat units. Two thirds of Waffen-SS men survived the war.

The Army as a whole suffered about a quarter of its men killed. However, unlike the W-SS, the Army had a large, non-combatant, logistical tail, and its combat units probably suffered losses of the same order of magnitude as the W-SS.

I would suggest that there is no particular evidence that the W-SS was more prone to fight to the last man than was the Army - certainly overall casualty levels appear not to support such a proposition.

I think that the answer to the basic question of "why the SS" is best summed up by a quote from Chairman Mao. "The army which makes a revolution must be immediately eliminated and replaced by one which will support the revolution." this holds true in most revolts which I have witnessed. I would say that the Waffen SS was formed for just such an eventuality in case the Germans had won the war.
Top
3302 posts