Discussions on the Winter War and Continuation War, the wars between Finland and the USSR.
Hosted by Juha Tompuri
14 posts • Page 1 of 1

I'm looking for a detailed description on the defences of JR1 at the time of the Soviet main attack. Especially the AT assets.

Here's a picture of what seems to be anti-tank obstacles, supposedly in the JR1 near Valkeasaari:

Simo Liikanen (Panssarinmurskaajat. Panssarintorjunta talvi - ja jatkosodassa) claims that there were a total of 18 anti-tank guns within the JR1 area. This correct?
Top

Whops stumbled upon this site:

Order of battle of the 10 Division also lists what they call "lohkoaseet". Weapons permanently installed in fortifications probably? 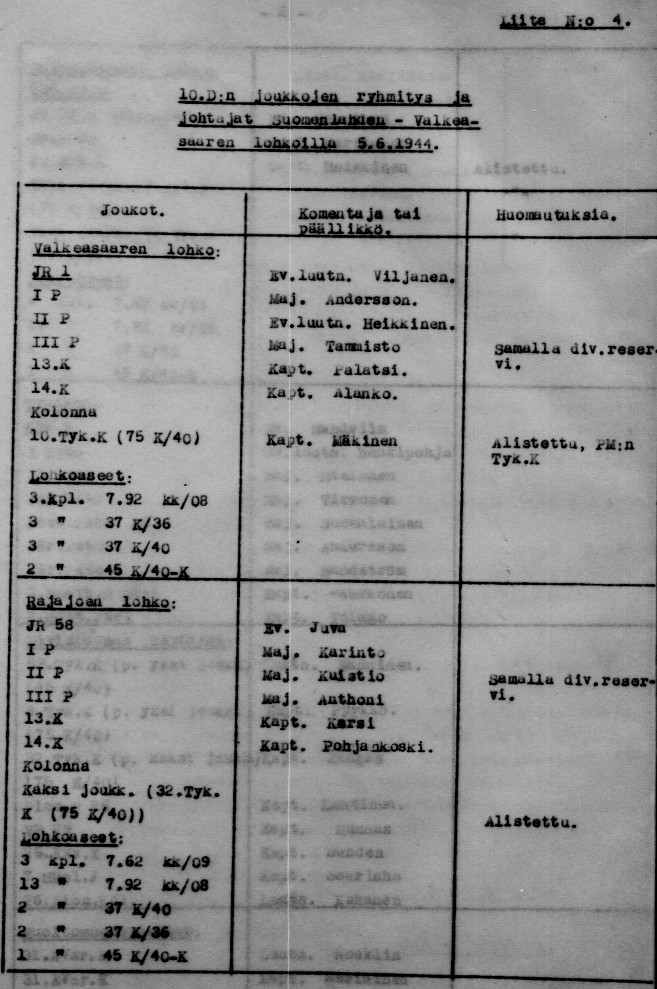 Also when it came to Finnish field army 7.92 kk/08 (German MG-08 Maxim) in its use were typically used in bunkers. 7.62 kk/09 would be standard 7.62 x 54R caliber Maxim m1910, which might in this case be installed into bunkers and various other field forficications (machinegun-nests, machinegun-cupolas, rotating machinegun-shields etc) - or not. It is known that Maxim m1910 were used in Finnish field fortifications at that time in large numbers, but they were also used by Finnish infantry in their regular role as heavy machinegun. Standard Finnish Continuation War era bunker mount was m/40, which had been designed to be compatible with both MG-08 or Maxim m/1910. MG-cupolas had either DT or m/1910, while rotating MG-shields were used with Maxims m/1910. It is worth noting that in general building of concrete bunkers to frontline was difficult due to constant enemy contact, so Finnish defenses in trench-war period frontline tended to be mostly field fortification variety - in other words structures build from wood and soil with things like rotating MG-cupolas and MG-shields sometimes installed in them.

A simple question: who operated those weapons? When the 10 Division replaced the 18th were their crews replaced as well?
Top

A map from "Kutsui ääni isänmaa JR58 1941-44" showing JR58s deployment around Rajajoki.
jr58.jpg
You do not have the required permissions to view the files attached to this post.
Top

Is it known what Soviet forces were deployed against JR58 and roughly how the attack developed?

Mosjtajanski indicates it was the 109th Army Corps, but he also has "the Million Bunker" in the JR58 sector - supposedly this is a case of the author being confused with the Sj 5 bunker, Summa sector during the Winter War and a Soviet bunker captured by the Finns in 1941 and used as a command central by JR58's first company...
Top

(*) Finnish military divided fortifications to two basic categories - permanent fortifications (kestolinnoite/kantalinnoite) which would include things like ferroconcrete bunkers built by special units and often already before the war vs. field forfications (kenttälinnoite) which included trenches, dug-outs, machinegun nests etc build from wood and soil typically by normal military units during the war.

The bunker:
133325_r500.jpg
There are quite a lot of images from the area at SA-kuva.fi if you search for Rajajoki, mostly from 1943.
You do not have the required permissions to view the files attached to this post.
Top

Image showing the relative strengths and the units involved in the initial attack:
Webp.net-resizeimage.jpg
You do not have the required permissions to view the files attached to this post.
Top
14 posts • Page 1 of 1