Beheadings in the Third Reich

Discussions on the Holocaust and 20th Century War Crimes. Note that Holocaust denial is not allowed. Hosted by David Thompson.
7134 posts

Hanging device which was never used in executions 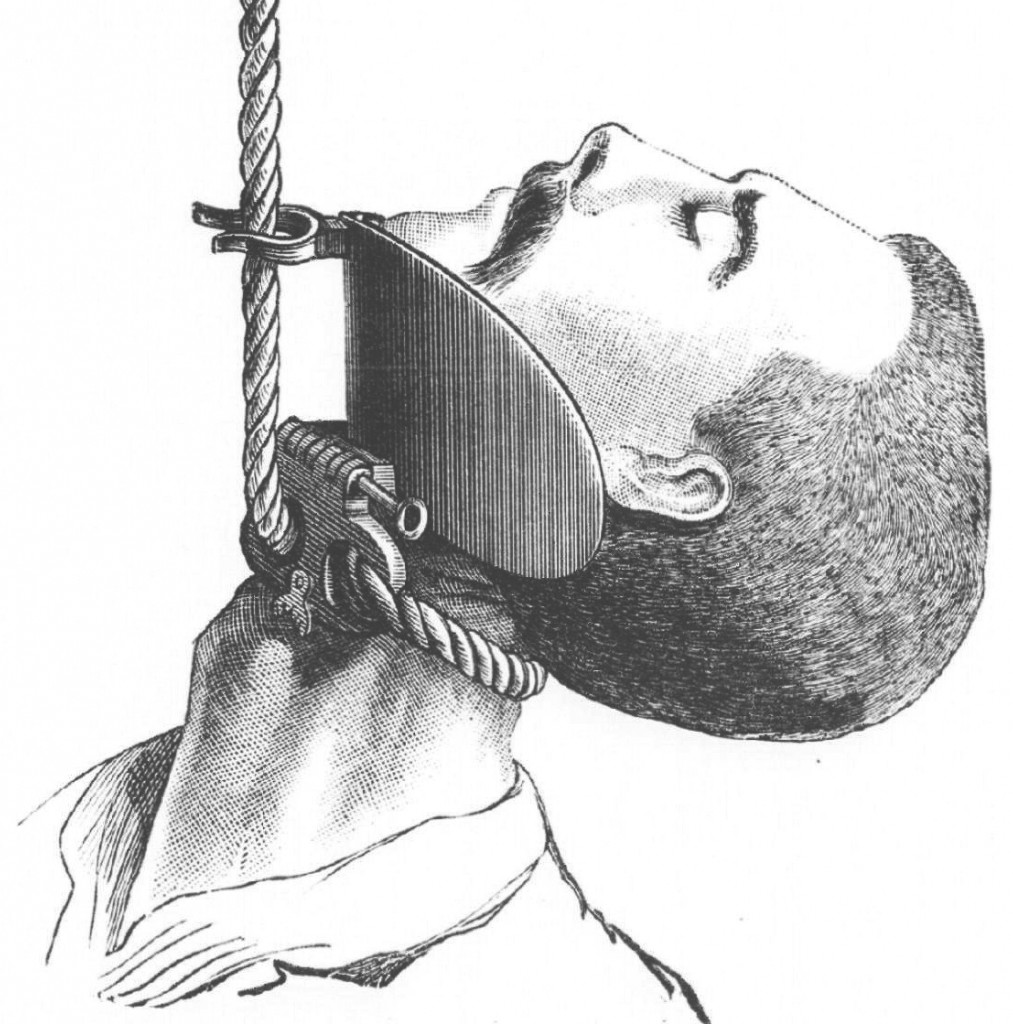 This hanging device was invented by British surgeon Dr Marshall to ensure that the neck of the hanged individual would instantly break at the end of a long drop. The objective of a long drop is for the rope to end up under the chin and throw the head violently backwards, breaking the neck vertebrae and separating the spinal column, thus causing instant unconsciousness and painless death. This device would hold the rope in the right position to do just that. This device would obviously only work with a long drop technique.

If the length of the drop is excessive relative to the weight of the condemned, the rope can literally rip the head off. Here are two cases in the US where this actually happened:


Nazis typically used a simple suspension hanging technique which often resulted in prolonged suffering of the victims. It is interesting to note that Nazi executioner Johann Reichhart actually tried to adopt the long drop hanging system at Stadelheim prison, but the authorities would not permit it.
Top

thanks for your reply about the soldiers standing on guard next to the Fallbeil.

But I'm bothered by the oversized display in your last post, for my taste the old graphic is much too big, disturbing.
A much smaller image would have been sufficient, sorry.

Please don't let this long and important topic degenerate into a horror gallery, but this is just my very personal opinion.

* I'm probably a bit oversensitive in this context, but my dearest childhood friend hanged himself from a wire in the attic of his house in 1992, Michael suffered from a brain tumour.
Top

I visited the Plötzensee execution site in Berlin earlier this year (before the pandemic). It was a shocking experience. Indeed, the place where the guillotine once stood is clearly visible in the floor.
IMG_20200221_134952.jpg
This is very interesting: According to the given information at the memorial site, there were between 1933 and 1937, in Plötzensee alone, 56 executions carried out with hand axe, before the guillotine was installed in 1937.
IMG_20200221_121841.jpg

This means that there were still 9 executions carried out by handbeil in Plötzensee during the first months of 1937, before the fallbeil was installed.
You do not have the required permissions to view the files attached to this post.
Top

how many Italians were guillotined according to the nationality cartel of the convicted?
Top

marko10 wrote: ↑
20 Oct 2020 14:31
how many Italians were guillotined according to the nationality cartel of the convicted?

According to the given information 6 Italians were executed in Plötzensee between 1933-1945.
But I don't know if all were guillotined. Executions were carried out with hand axe until May 1937, and from 1942 also by hanging.
Top

Is this gallery of horror open to the public ?
" The right to believe is the right of those who don't know "
Top

Sorry, my internet connection is to slow to open the whole website, hope, you will find the info you are looking for...

"Is this gallery of horror open to the public ?"

hopefully not, otherwise some stupid kretins would spray their nonsense on the walls, probably also on the Fallbeil.

* These few photos are the stuff, that follows one into the own dreams, what makes you awake in the middle of the night...
Top


Is this gallery of horror open to the public ?

The Pankrac memorial is not open to the public because it is located within the grounds of an active prison.
Top

marko10 wrote: ↑
20 Oct 2020 14:31
how many Italians were guillotined according to the nationality cartel of the convicted?

According to the given information 6 Italians were executed in Plötzensee between 1933-1945.
But I don't know if all were guillotined. Executions were carried out with hand axe until May 1937, and from 1942 also by hanging.

According to Ehrenbuch der Opfer von Berlin Ploetzensee, only two Italians executed in Ploetzensee prison were executed for political reasons (i,e. resistance fighters). They were Joseph Andreasi, executed on 13 October 1944, and Ambroise Piantoni, executed on 11 July 1944.

The other four Italians were probably executed for other crimes. Keep in mind that even theft of a minor item such as a piece of clothing taken from a bombed out building was punishable by death by the "People's Pest" Regulation.

From total of 2883 persons executed in Ploetzensee prison between 1933 and 1945, 1574 were WiderstandsKampfer, i.e. resistance fighters.
Top

This is a notice of guillotine execution of Dr Hilde Wernicke and nurse Helene Wieczorek in Berlin Moabit prison on 14 January 1947.

https://de.wikipedia.org/wiki/Hilde_Wernicke
You do not have the required permissions to view the files attached to this post.
Top

how have executions changed with fallbeil in the immediate postwar period? what were the differences regarding the execution procedures?
Top

marko10 wrote: ↑
25 Oct 2020 18:31
how have executions changed with fallbeil in the immediate postwar period? what were the differences regarding the execution procedures?

It appears that notices of execution were pretty much identical to those during the Nazi era. However, I believe that post war scharfrichters no longer wore the formal clothing such as a tuxedo, white gloves, and a top hat for executions. We know from post war fallbeil execution reports in Dresden that executions were carried out quickly, and it took only several seconds from the time the condemned was turned over to the executioner and the fall of the fallbeil blade. It is not clear if the executioner used to same phrase as during Nazi era to report that the verdict has been carried out: "Herr Staatsanwalt, das Urteil ist vollstrect".

Some post war fallbeil executions were carreid out by Nazi era scharfrichters such as Friedrich Hehr, who beheaded more than 60 people in Wolfenbuettel prison after 1945, using the same Nazi Mannhardt fallbeil in the same execution building. Hehr was an experienced guillotiner and knew how to properly maintain the fallbeil.

Unfortunately for some condemned, this was not the case with fallbeil executions carried out in mid 1960s in Leipzig. The fallbell used was an old Tegel type fallbeil tranaferred there from Dresden. Tegel fallbeils were not built as sturdy as Mannhards and would malfunction much easier if not properly maintained. Moreover, the Dresden fallbeil was mounted outside in the courtyard and therefore it was more deteriorated than indoor fallbeils. In 1966 the use of fallbeil in Leipzig was completely abandoned, most likely after some badly botched executions. This was mentioned in several articles i read about these executions. It is certainly possible that the falling blade got partially imbedded in the neck of the condemned person, and then we can only speculate what action was taken to finish the job. If they could not free the stuck blade/sledge by winching it up and letting it fall again, it is possible that one of the assistants jumped on top of the sledge and forced it down to finish the job. The last person beheaded with the fallbeil in Leipzig was Dr Horst Fischer.

I think the biggest problem with poorly maintained fallbeils was that the metal sliding surfaces between the sledge and the outer frame would develop a coating of rust and possibly even become pitted and this would cause so much friction that the sledge could easily get stuck halfway down. Just lubricating the deteriorated rusty surfaces may not have been sufficient for proper functioning.

Also, beheading of Werner Gladow in Frankfurt on Oder in 1950 was a terribly botched affair, as it took three falls of the blade to finally sever his head. The blade would get stuck repeatedly on its way down. It is interesting to note that during his trial, the prosecutors originally asked to seek three death sentences for Gladow, based on three most serious crimes that he had committed, including murder. When Gladow heard of this, he jokingly remarked that "this would be like killing him three times". Well, his actual execution pretty much followed that script. The execution report is not specific about the guillotine blade getting partially stuck in his neck without severing it, but supposedly Gladow screamed like an animal and the prosecutor who witnessed the execution fainted. Therefore, the scene was most likely very ugly.
Last edited by Pete26 on 26 Oct 2020 03:32, edited 4 times in total.
Top

The longest thread on this forum

This thread has now exceeded 7000 replies and 1 million views.
Top

Were the rituals for the condemned still the same? or death cell next to the execution room? were the condemned led before the bare-chested fallbell? Did the attendants take the condemned man up and spread him out on the guillotine table?
Top
7134 posts