Discussions on the Winter War and Continuation War, the wars between Finland and the USSR.
Hosted by Juha Tompuri
18 posts

12/1/1939, Finland Declares "State of War"; Russians Do Not Yet Acknowlege Invasion; Frontier Bombarded

12/1/1939, That Powerful Russia Could Overwhelm Finland in a Comparatively Short Period Must Be Assumed

12/1/1939; Does Stalin Wish for Czarist Expansionism, World Revolution, or Strategic Position Against Hitler?

12/1/1939, World Has Become Used to Shocks of Totalitarian Aggression & Disregard of International Decency

Thank you very much for posting the interesting war time news.
Please keep on posting more

Couple of things have puzzeld me for some time, the origing of some Winter War era words/expressions. Like Mannerheim line, Molotov cocktail and Molotov bread basket. The last one probably being of Finnish origin ( https://en.wikipedia.org/wiki/Molotov_bread_basket ) but the other may have had a foreign origin.
So... what have been the first mentions of them that you have seen at the news, you have gone through?

Best regrds, Juha
AHF Bookstore - How you can support AHF - Get your AHF gear
Top

The above is the earliest mention I've seen so far for the Mannerheim Line. ... I haven't seen "Molotov Cocktail" yet, but I'll be on the lookout for any mention. Molotov did explain publicly the Soviet position at the start of the war, but I'm not exactly sure when the nickname started.

12/1/1939, Berlin Reports 194 Ships Supplying Britain Have Been Sunk by U-Boats or Mines Since Start of War

Juha Tompuri wrote: ↑
17 Feb 2022 07:36
Like Mannerheim line, Molotov cocktail and Molotov bread basket. The last one probably being of Finnish origin ( https://en.wikipedia.org/wiki/Molotov_bread_basket ) but the other may have had a foreign origin.

I believe term "Mannerheim Line" was coined by Selkirk Panton of Daily Express on his article on 31 October 1939.
Top

12/2/1939, News of Soviet Invasion of Finland Whips Up Wave of Anger in Italy; Rome Worried About Balkans

Soviet Demands Threaten Finnish Sovereignty; Who Are the Industrious Finns? History of Finland, 11/2/1939

12/3/1939, War by Allies Against Russia Held Unlikely; Turks Cling to Belief that Russia Does Not Want Real War

Proclamation Declares Finnish Republic—Can No Longer Depend on Russia Due to Famine & Chaos, 12/11/1917

12/3/1939, Ex-President Herbert Hoover Wants Recall of U.S. Ambassador to Russia Due to Invasion of Finland

12/4/1939, Advice to Break with Russia Nixed by F.D.R. Cabinet Due to Desirability of Avoiding War Psychosis

12/4/1939, Fifty-Three Jewish Inhabitants of a House in Warsaw Executed for Resisting Surrendering to Nazis

12/5/1939, Soviet Troops in Finland Well-Supplied with Ammo Only & Urged to Attack by Political Commissars

12/5/1939, Many Germans from Colony in Helsinki Decline to Board German Refugee Ship Departing Finland

12/6/1939, Molotov Argues Finland's Appeal to League Is Illegal Because Gov't Does Not Represent Its People

Who won the Winter War? It's been said that Stalin won because he got more than he originally asked for, but on the other hand, it would seem Finland won because it kept its freedom.

Stalin didn't get what he asked from his army. Here is a Chrome translation from a Russian site.

The final version of the "Plan of Operation against Finland" was developed by the military council of the LVO on October 29, 1939, even before the termination of negotiations between the delegations of the two states in Moscow.

The idea of ​​​​the operation, which was mainly supposed to be completed within about a month, by the birthday of I.V. Stalin (December 21), was to simultaneously invade the territory of Finland in all directions “in order to separate the grouping of enemy forces and, in cooperation with aviation, inflict decisive defeat of the Finnish army”.

In the future, it was planned to occupy the entire territory of Finland with access to the Swedish and Norwegian borders.

The political plan of the war provided for the creation of a formally independent puppet state of "people's democracy" - the Democratic Republic of Finland with the transfer to it of the territory of the KASSR inhabited by Karelians (approximately 70 thousand square kilometers). In return, the FDR transferred the territory of the Karelian Isthmus to the USSR.

On the Karelian Isthmus, the forces of the 7th Army should “break parts of the cover, seize the fortified Finnish area on the Karperesheyka and, developing the offensive in the north-western direction in cooperation with the troops of the Vidlitsky direction, defeat the main grouping of enemy troops in the area of ​​Sortavala, Viipuri, Kyakisalmi (Kexholm ) and capture the area of ​​Hiitola, Imatra, Viipuri. Upon completion of this task, be ready for further actions inland.”

In the instruction given on November 29, 1939, the command staff of the LVO was tasked with capturing Vyborg within four days, and entering Helsinki by the end of two weeks.

The Soviet border demands would have cut the main defense line (aka Mannerheim line). Any treaty would have to win a large majority in the parliament. 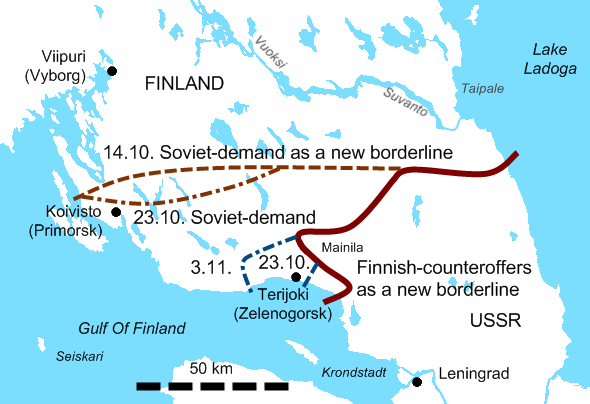