Discussions on all aspects of the Japanese Empire, from the capture of Taiwan until the end of the Second World War.
5 posts • Page 1 of 1

The Japanese Intelligence Major who served in SE Asia.

Has anyone any further details on this man?

This from a 1968 biography.
You do not have the required permissions to view the files attached to this post.
Top

From Guns of February: Ordinary Japanese Soldiers' Views of the Malayan Campaign and the Fall of Singapore 1941-42,Henry Frei,2004:


On the afternoon of 21 February, Mr. Royal Goho, leader of the Singapore branch of the Indian Independence League, visited Major Fujiwara Iwaichi, who at his liaison agency (the Fujiwara-kikan) was successfully recruiting Indians to join the Indian National Army.

"Major, do you know that the Japanese soldiers are indiscriminately detaining Overseas Chinese and massacring them? One can barely face such cruelty. Has the Japanese Army lost its mind? The British had already surrendered and the war was supposed to be over!"

Busy overseeing the surrender of the 55,000 Indian POWs, Fujiwara was unaware of the incident.

Goho pleaded:
The residents of Singapore and Malaya respected the Japanese soldiers' bravery and their fine policy to liberate and protect the natives. It is true that Indians and Malays were deeply hostile towards those Chinese who had been exploiting them to their hearts' content under the British. And it is true that some even rejoiced in the massacre of Overseas Chinese. However, upon witnessing horrifying scenes, their regard for the Japanese Army has turned into fear. This is a sad thing for the Japanese Army. Can't you do anything to stop it?
Fujiwara dispatched some members of his agency to investigate the situation. The result of the investigation was even worse than what Mr. Goho had recounted. Shocked by the seriousness of the matter, Fujiwara immediately went to see Chief-of-Staff Sugita at Army Headquarters, and inquired if this really was an order from the Army.

With a pensive expression, Sugita lamented that his moderate position had been overruled by staff officers holding extreme opinions, and an order to carry out the massacres had been issued much against his wishes. Fujiwara countered that the result of this purge was a disgrace for the Japanese Army.

He wrote a memoirs about his experience during WWII. The book told his mission in Malay during the first phase of Pacific War, where he collaborated with Malays and Indian nationalists in Malay to defeat the British. Then, he worked with a former British Indian Army captain named Mohan Singh to created the Indian National Army, which later taken over by Subhas C. Bose.
His memoirs mainly related with the INA. After the war, Fujiwara tried as a war criminal, but later he was found not guilty. After his return to Japan, he was rejoined with Japanese Army and got general rank.
Top

Pic of Fujiwara with INA officers and soldiers in Ipoh, January 1942 from the book.

[/img]
You do not have the required permissions to view the files attached to this post.
Top

Here's a photo of Fujiwara making a speech to the INA as well: 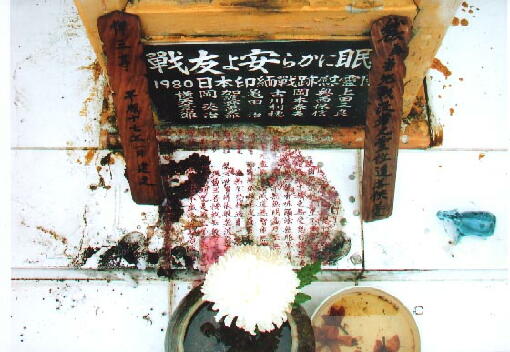 Joyce Lebra in the preface of his book states he saw "himself as the 'Japanese Lawrence of Arabia'":
Top
5 posts • Page 1 of 1