Thought I would make a topic dedicated to this aircraft design that never made it to production. The Junkers Ju 187 was supposed to be the successor to the infamous Ju 87 Stuka. However for some reason the RLM deemed the Ju 187 as being only equal in performance to the Ju 87 D series and thus not the great leap needed to become the ground attack aircraft the Luftwaffe desperatley needed.

While I can understand the futility of some of the innovations of the Ju 187's design, such as the reversable tail, I am confused as to how the plane would have been so slow despite using the Jumo 213 engine. Was it the extra armour and armament that would have slowed down the aircaft or was there another reason for the Ju 187's demise? I would also like to discuss possible theories as to how the reverable tail would have worked (or not worked).
Top

Thank you Sitzkreig for answering why the Ju 187's performance was so minimal. While I am a fan of Luft 46 there are still unaswered questions about many of the nuances of this design. Other online sources I have seen either state that the project was cancelled earlier (in 1941 according to a Wikipedia article) with no stated reason, that the aircraft's projected performance was no better than the Ju 87 D series (Luft 46.com and http://www.vectorsite.net/avstuka.html#m6 ) or that there would have been delays in production that where unaffordable ( http://www.lemaire.happyhost.org/avion/ ... tml#101565 ).

While I am hardly an expert I believe that the Ju-187 was slightly too ambitious especially with the reversable tail mechanism. A remote controlled barbette was also not entirely needed, just a single heavy cannon was good enough. The Soviet's managed this with the IL-2/IL-10 Sturmovik which was also a single engined, heavily armoured monoplane. Then again maybe the Sturmovik is not a good comparision. Especially since the Germans didn't have much respect for Soviet aircraft design.

I cannot see how the tail could have been reversable. It is still a mystery how the engineers at Junkers hoped to pull this off. Even if they did the plane would have reversed it's rudder and who knows how it would have handled. If I where them I would have ditched that idea quickly.

To make this thread more interesting here is a Ju 187 piece of art I found:

E-mail the artist and tell him how awesome this looks!

From what little I had found about the Ju-187, be it information or drawings, I came to think that the tail section somehow was rotated 180º to the new in-flight position. But from the drawing that you posted, it is clear that the tail (very different in shape to the tail shown in http://www.luft46.com/junkers/ju187.html) is just lowered to the new position. This is simpler that the other option, and would have solved the problem of the reversed rudder. But still, I have no idea if this is based on some hard data, or it is just the author's idea.
Top

Well the tail design shown is present on the model on the Luft 46 article. Im geussing their was two designs for the reversable tail. A novel concept but I would have sacrificed it to save weight. Typical German overcompensation...

This is the model by the way... 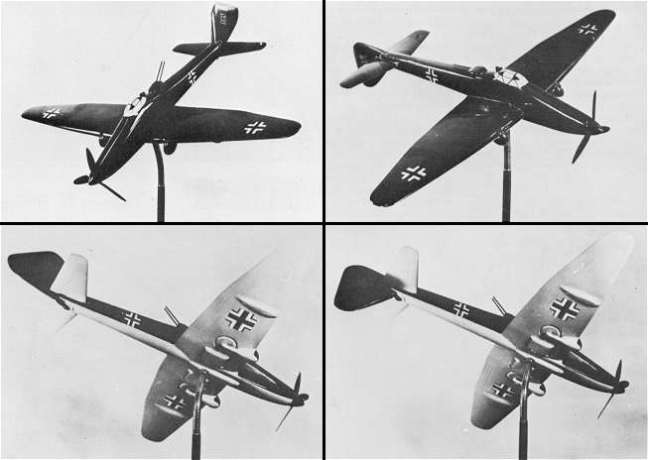 Notice how the tail is the same as in the art piece. Obviously this would have been more pracitcal than a rotating tail assembly. Im not aeronautical expert but I surmise that perhaps the tail was kept down in flight and only raised on landing. Would this case disastourous handling problems on landing? And if the tail is down in flight wouldn't this also cause uneeded drag?
Top

Tail up or down wouldn't mind much in flight (as the rudder needs drag to be effective...it creates drag in both positions).
To only reason why the rudder is turnable is to give the gunner a clear path of fire and view and it seems also to be working as a tailwheel re-tractor (so it's actually a very simple and smart dual solution)!
Top

This is going to sound stupid but does the Junkers Ju-187 "Stuka" look kinda like the Ilyushin IL-2/IL-10 Sturmovik? Im not insinuating anything about related designs or anything but if the Ju-187 flew over the Eastern front with it's tail in the up position could their be a "friendly fire" incident with some German fighter pilot thinking it was a Sturmovik from a distance?

I dunno it's just a strange hypothetical question that popped into my head....

As for the Junkers Ju 187, did any data on it's projected performance survive the war? We know the RLM didn't produce it because it's improved performance compared to it's predecessor was medicore but Im still curious about the data. The article on Wikipedia says a max speed of 400 km/h but I don't know what primary source material was looked up.

None of their other designs got to leave the drawing board for one reason or another and fighter-bombers where not used by the Luftwaffe until the higher echelons came to the reality that the Ju-87 no longer cut it in 1943. Im going on a tangent.... sorry!

Some people favour fighters or the huge bombers but Im a fan of the mudmovers like the Stuka, A-1 Skyrider and the Sturmovik to name a few

Interesting discussion and the images are great. And yes, I can see some minor similarities between the Ju187 and the IL2/IL10 (although I'm unsure as to the possibility of friendly fire).

I would hypothesize that the Ju-187's failure was not just related to the actual or potential problems of performance. The RLM's own processes and criteria for new aircraft were invariably convoluted and had built-in flaws (e.g. the Bomber B programme), so a replacement for the Ju87 Stuka was probably set up to fail from the start for beaurocratic reasons. Then there was the operational raison d'etre for dive bomber/ground attack aircraft; why build an aircraft that effectively offered nothing new or better for service when alternatives (i.e. the FW190) demonstrated their worth in the field? In some respects the RLM and the Luftwaffe echoed this policy in the way they rejected or failed to encourage alternative/replacement fighters to the Me109.

Finally, putting aside the obvious value of a tank-killer or ground attack aircraft such as the Hs-129 or FW190, hadn't the concept of the dive bomber become operationally redundant in Europe by 1942-43? Aside from the original Ju87's performance in the early campaigns of 1939/40, or in air superiority situations such as over Crete in 1941, the only other successful application of dive bombers designed and used for this purpose was in the Pacific carrier battles, vis-a-vis the Japanese Aichi D3A Val, and the American Douglas SBD Dauntless. The Vultee Vengeance's failure to perform up to expectations bears out the limited operational capability and potential for success for the land-based dive bomber in the latter years of WW2
Top
9 posts • Page 1 of 1