Discussions on the final era of the Ottoman Empire, from the Young Turk Revolution of 1908 until the Treaty of Lausanne in 1923.
11 posts • Page 1 of 1

Did the Turks really wire the water wells with explosives or is this just a movie myth?
Top

Not only did they but they nearly blew them all up. I think only one was left in tact. If it wasn't for the water laying in Wadi Saba which lasted for about two days, the horses would have been very distressed that evening. It would have meant a long march back to Karm where there was abundant water.

While the blowing up of the wells looked dramatic in the movies, both in the 40,000 Horsemen and the Lighthorsemen, it was a fact.


Does anyone know which Turkish unit opposed the Light Horse charge?


Water was the life blood of the desert and Beersheba was where the Turks had sole possession of 17 wells - the wells of Abraham ‘'the well of oath'’. Beersheba must fall at all costs in one day, before the desert claimed the lives of the Allied troops and their horses.

...The officers were desperate for a solution. It was then that Brigadier Grant of the Australian 4th Light Horse approached General Harry Chauvel proposing a frontal charge by mounted infantry, his only request, he be given a free hand. This was considered to be a suicide charge, with over 3 miles of open flat land fortified by artillery, machine guns and trenched battle hardened Turkish troops. Were these Aussies destined to die like the thousands gone before them, or was this to be part of God's plan to free Israel?

The situation was desperate. The command was given, and the 4th and 12th Regiments of the Australian Light Horse, 800 men and their horses, formed for the charge. Headlong in three rows, bayonets drawn, they charged into the Beersheba strong hold and the Turkish defences. Through exploding shells the Light Horsemen galloped with determination and valour. Closer and closer they came till the Turks couldn't lower their artillery guns any further. These brave men continued on, riding under the Turkish guns, making them ineffective.

As they approached the Turkish trenches, the machine guns now came against them. Amazingly, the Turkish troops in their trenches had set their sights at 1600 metres. As the Light Horse charged closer, in desperation and confusion the majority of the Turks did not adjust their sights, shooting over the heads of the advancing horsemen. When the Light Horse reached the first trenches, many riders on their horses jumped it, while others stopped and fought with bayonets.

The bold courage of these men sent shock waves through the Turkish lines as hundreds of Turks surrendered. Although there seemed to be a victory at hand, the battle wasn't over. All would be lost if the life giving wells of Beersheba were destroyed. It was the responsibility of the Germans to blow these wells, which they proceeded with as the battle appeared lost. The German Officer in charge of this important task incredulously was away on leave, and in the confusion, his subordinate only succeeded in demolishing 2 and damaging 2 of the 17 life giving wells.


The charge of the 4th Light Horse Brigade at Beersheba on 31 October 1917, taken by a Turk whose camera was captured later in the day.

"The destructions to be done at the last moment couldt done. Because the preparations which were planned before were already old and disturbed. For that reason the plan was removed. There were no time to make a new destruction plan. The enemy cavalry entered the town earler then expected. They all possessed every thing continously. Birü's-Sebi fall into the hands of the enemy with all its wells, water installations undamaged. With the fall of the town enemy gained a strategical point to treaten the left side of Gazze."
Top

If you do a search on the ALHA Forum from whence you refer to THAT pic, you will find that a spirited debate occured over this very issue. Apart from the AWM's dismissal of the claim that it was taken by Sgt Elliott of the 4th LHMGS, I have always been one to follow the money to find the answer. My children's GGF, Bert Schramm had that very pic in his photo album which he labeled "On Manoevers". His commentary is quite meaningful in view of his placement within the scheme of things - he was a trooper with the 9th LHR. The significance of this should not be lost as the CO was LT Col Bill Scott. This fellow is important to the story as I have a letter from the OC of C Squadron, 12th LHR - They did take part in the charge, albeit after it was over. So if anyone knew anything about the charge, it would have been him. This fellow purchased that very pic from Scott who had set up a wonderful trade in that particular pic, flogging it off as a talking point.

So if we follow the money, we find Scott at Deir el Belah in March 1918 flogging this pic around the place. It was a pic taken of the Regiment by the official photographers as they re-enacted the charge for the cameras.

Now, how do we know it isn't a pic of the charge? We go back to C Squadron 12th LHR for the answer. Both A and B Squadrons were formed up in rows as illustrated in the pic but C Squadron was formed up in artillery column formation. In other words, a long whispy trail rather than a coherant row as shown in THAT photograph. That is why no one in the 12th LHR identified it as a pic of the charge. The layout of the men during the charge was totally different to that represented in the pic.

I have no problem believing Elliott when he puts hand on heart and says he took a pic at the charge, just that it wasn't this one.

As for the pic extracted from a dead Turk's camera ... makes a good yarn doesn't it? One of the many good yarns told that day but given the most cursory examination is clearly demonstrated to be a furphy.

Just to illustrate the problems experienced by the Allies as a consequence of the destruction of the wells, here is a pic of the men restorring one well and attempting to get a motor pump working. You will note the planking over the well and the couple buckets in the foreground.

Things were pretty grim with the men being assigned to well digging duties after the taking of Beersheba. Dspite all the work, not enough wells could get back into function to water the horses so many of the units were forced to relocate to Karm at the railhead and more important, the end of the water line. Karm had abundant water.

The road to Karm was hot and dusty. I will let Darley tell the story:


On the following afternoon [4th November 1917] the scarcity of water, which was becoming very pronounced, compelled the Brigade to move back to Karm. The whole distance was traversed through thick clouds of choking dust, it being impossible at times to see the head of the horse one was riding. Owing to the difficulty of keeping touch between units orders were issued that the heads of columns would keep close up to the unit in front. It is said that one commanding officer who had been carefully carrying out these instructions found after marching for about three hours that he had been going round in a large circle, carefully hanging on to the tail of his own regiment. Karm was eventually reached at 10 p.m., both men and horses having a good refreshing drink before bivouacking for the night.

A good yarn that one about the regiment going around in circles - one of those stories that always pops up. Another Beersheba furphy.

However, Darley's story does illustrate the conditions that existed at Beersheba at this time.

As to what Turkish Regt fronted the defences at Beersheba for the 4th LH Bde Charge thats an interesting question as I have no confirmed answer.

Turkish accounts mentioned a Bn of the 2nd Regt down in that area while a Bn of the 48th Regt was around Tell El Saba. Two companies if the 81st Regt arrived late in the day to Beersheba did they go into the defences or remain in town?

The short is I don't know.

My understanding is that he was overriden by German directives.He did not think the Berrsheba attack was a ruse and would have earlier blown up the wells as well.

The aim of holding the Gaza-Beersheba line "indefinitely" might have been possible with less German interference? 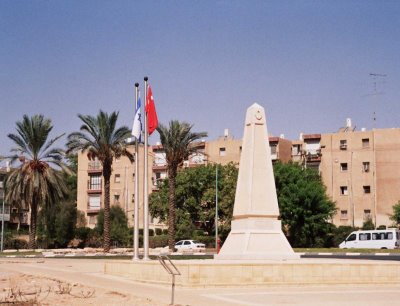 Turkish Monument in Beershaba.The monument, inaugurated in 2002, to commemorate the Turkish soldiers that died here during WWI takes place on the east side of the old Beersheba train station on the Hejaz Railroad.(left) 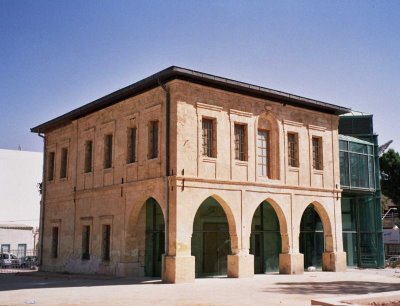 The Turkish governor's house. Built in 1906. Now being restored in order to become a museum


It was built during the Ottoman occupation of Palestine, and served as an outpost at the edge of the Negev desert.