Discussions on the Winter War and Continuation War, the wars between Finland and the USSR.
Hosted by Juha Tompuri
37 posts

Still, you seem determined to flame everyone who dares to question you

I apologize to you if I insult you.My English is bad It is not my mother-tongue.Here

Since when has the internet been of higher value with respect to source material than official written records.

I didn't notice question.
I was in a rush and word web was first in a mind besides not every mole can see

the peace treaty of Moscow was signed by LEGITIMATE Finnish government. Was it the will of the entire Finnish people or not, is a big question. Of course, another option would be to continue to fight the Soviet Union.

You seem to overidealise democracy and international politics in the 20th century. There are so many times when the government does something that is not will of the people.

the peace treaty of Moscow was signed by LEGITIMATE Finnish government.

Does that make Soviet actions legal?

Dear Juha, again we come back to the politics.

Which Soviet actions do you mean?

Was it land ceded to USSR by free will of finish people( Finnish government)?
I meant no demands to cede this land to USSR suport by brutal military power.

It is much harder for Finns to argue legal issues here than on the Winter War. The Finnish Government voluntarily attacked the USSR - whose borders were agreed by the Finnish Government in 1940. Like the conditions under which it was signed or not, international agreements are legally binding. Indeed, Stalin was careful to revoke the non-aggression pact with Finland before the Winter War to ensure that he did not break international law as he understood it. The League of Nations may not have agreed!

Of course the Finnish Invasion was to regain lands lost on 13 March 1940 due to the Soviet Invasion but it did so in concert with the Nazi's and this tarnished Finland's international reputation.

I believe that it was the Finnish Government who asked Stalin for an armistice in 1944 and not the other way round. Bearing mind that the Red Army was doing pretty well by then, even considering Tali-Ihantala, it seems fortunate that he only required a return to the 1940's border.

So, I would suggest, that is was by the free will of the Finnish people as expressed by their elected government - just as the Finnish invasion of the Soviet Union was also by their free will.

This isn't to say that I agree that it was "right" or what Finns would have preferred but only that it was legal and by the free will of the Finnish people.

I trust here not to a place for policy. And everyone should have political opinion silently.

Bair wrote: Which Soviet actions do you mean?


janner wrote: it was legal and by the free will of the Finnish people.

I would dare to doubt the "free" here.

Hey c'mon now guys, why cannot we stick with history instead of philosophy or politics?

When wars are fought, territory is seized, people are killed, attacks are made and defended against, counterattacks carried out and so forth, until armistice and peace break out. Free will -- who has it in this context?

Soldiers in the chain of command and under discipline have no choices but to obey, civilians have no say, politicians decide and the military try to carry out their missions. Situations change, opportunities arise and are lost. The events proceed their course, surely we can take moral stands about the turns, but what good does it do 60 years afterwards?

Let us rather try to figure out how and why the events unfolded, it is a huge enough task even without "scoring points" or claiming "penalties" to the sides involved.
Top

About political aspect - see the good words on the monument. IIRC Slavs (Novgorodians), Finns and Karelians lived/live for centuries there. By the way, Finnish prime-minister P. Lipponen and Karelian chairman of the Government S. Katanandov said a lot of very wise words during that ceremony about the aim to live in peace and friendship, to remember history and deep relations and they mentioned the symbolism of location of the monument at crossroad [between past and future].

Here is the photo from the ceremony of monument opening (27.06.2000)
from the official site of the Government of Karelian Republic http://www.gov.karelia.ru 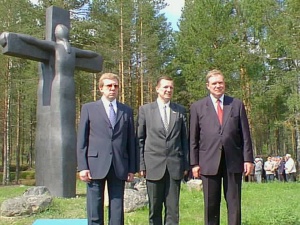 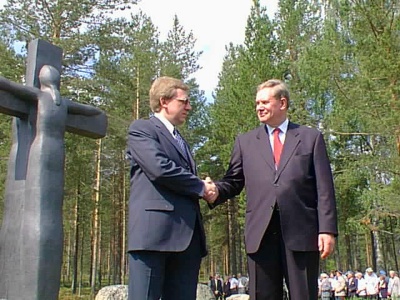 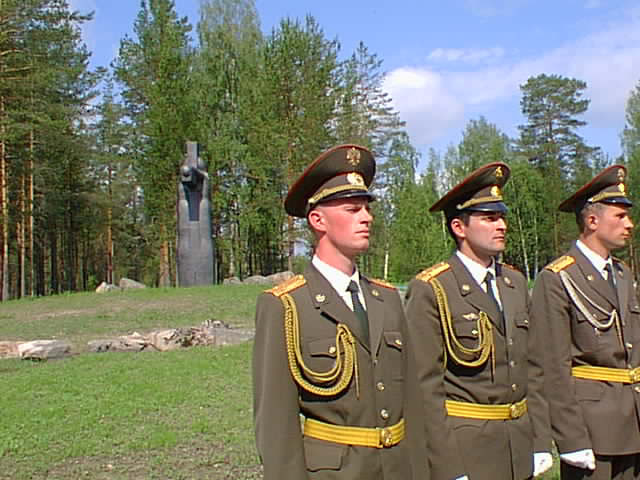 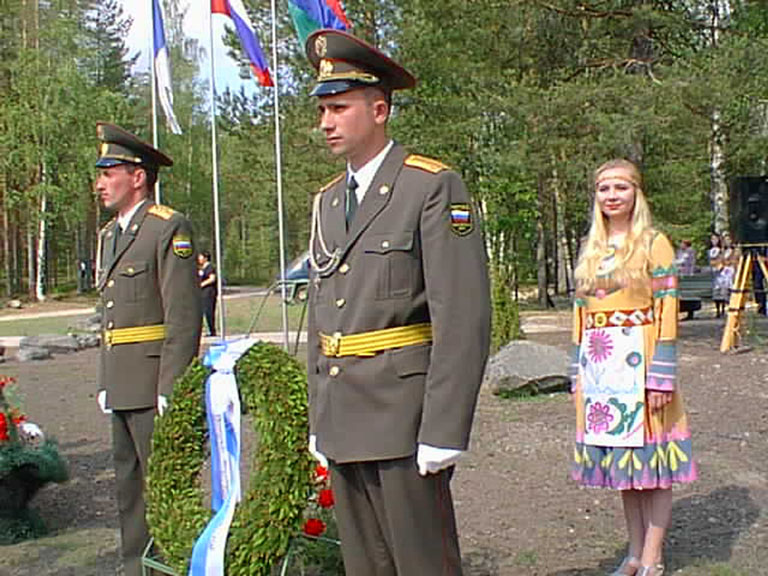 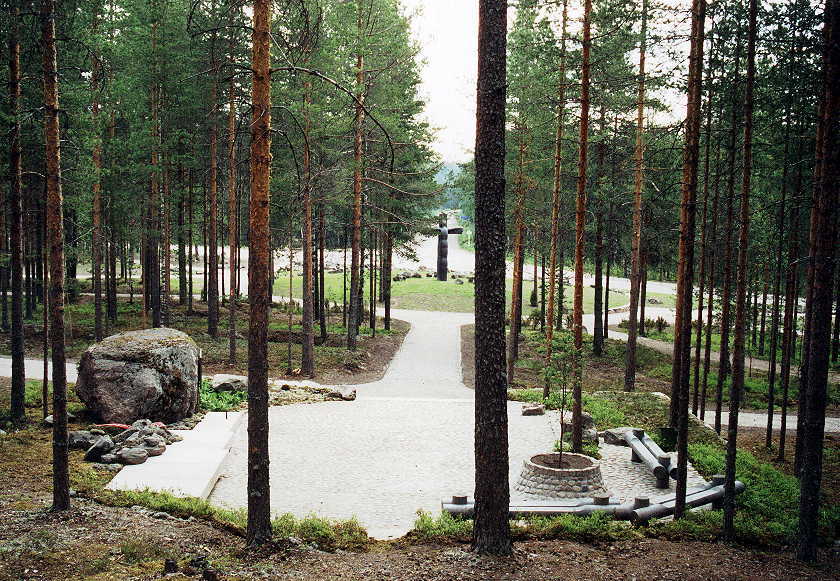 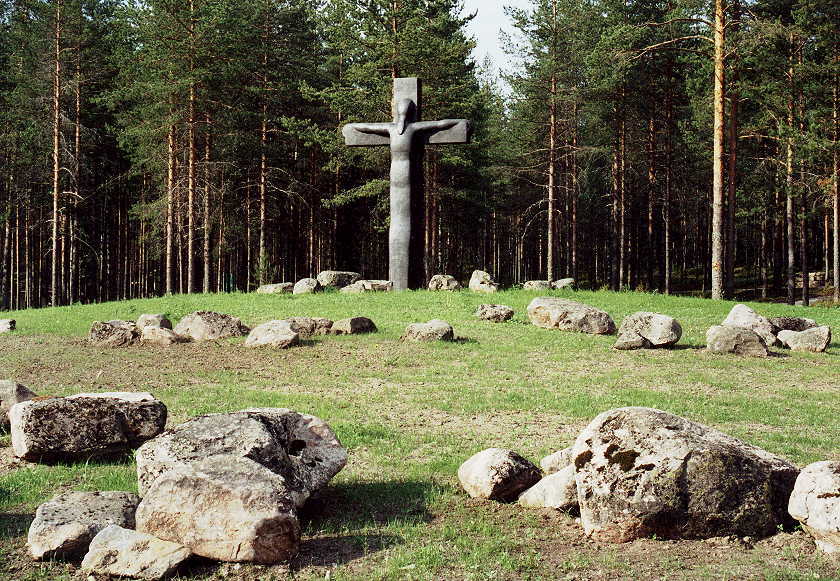 Veterans from both sides: 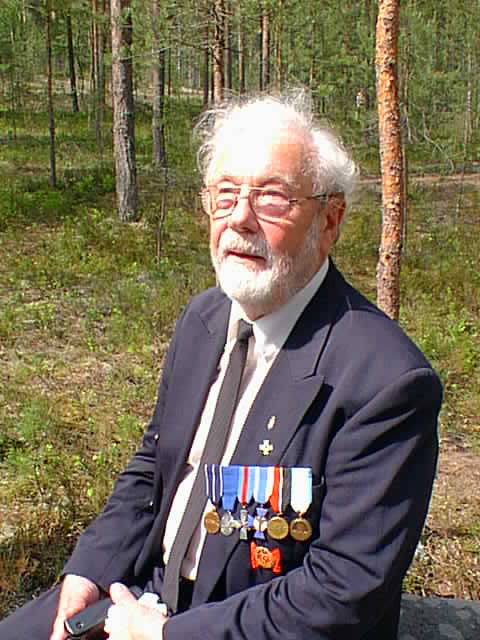 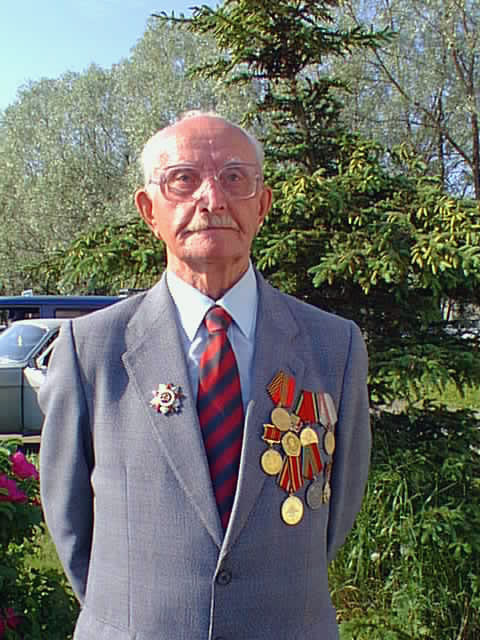 There are no opponents here, we all are at the same side, the truth.
Concentrate on the topic.


Here a photo from the book Kenraalimotti by Tauno Räisänen. (mentioned also here: http://forum.axishistory.com/viewtopic. ... t=#1075295 )
It might be approx at the same place as the "Cross of Sorrow" today ?

It's taken by Finns after the re-capture of the Lemetti area during the Continuation war.
Finns found the monument (and several others at the area) at the Rinteenvaara (North of Lemetti road crossing), at the place where Finnish troops had, during the Winter War buried over 600 fallen Soviets.

The Soviet erected monuments (as the on at the photo) had couple things in common:
-there were no names of the fallen
-there were no numbers how many fallen were buried
-the monument stones used were stolen tombstones from Finnish civilian graveyards

I meant oponent(men who has different opinion on that question ).The truth occasional don't care but care propaganda.

Juha wrote:
There are no opponents here, we all are at the same side, the truth.

Completelly agree. It will be very good if everybody agree with this Juha's statement.


Juha wrote:
Here a photo from the book Kenraalimotti by Tauno Räisänen. (mentioned also here: http://forum.axishistory.com/viewtopic. ... t=#1075295 )
It might be approx at the same place as the "Cross of Sorrow" today ?

Thanks for the rear photo. My translation of the inscription: "Mass grave of soldiers and commanders lost in the fight with White Finns" [Interesting, that Finns was written as Fins - different grammar of 1930s or some kind of illiteracy?]. It was indeed usual practice during the war that no names and no numbers of burried fallen were given in the case of mass graves. Soviet individual graves with life dates, rank and name of fallen man were more rear during WWII as me seems - usually they were made by unit friends of the fallen, and disappeared quickly because of simple wooden 'grave-stone'.

Thanks for the translation.


BIGpanzer wrote: It was indeed usual practice during the war that no names and no numbers of burried fallen were given in the case of mass graves.