Does anybody have the OoB of Sturmabteilung 7 in Normandy? If been looking for information but I didn't find too much. Any clues?
Top

I guess you are refering to Sturmbataillon AOK 7. This unit consisted of:

Hi Martin,
You're right. I indeed meant Sturmbataillon AOK 7. I was a bit sloppy, sorry.
Thanks for the information.

MArtin Block wrote:I guess you are refering to Sturmbataillon AOK 7. This unit consisted of:

In 1944 there were A/T rifles in german units?
Top

Probably sPzB 41- although a PzB 39 would still make quite an impression on a softskin vehicle or a lightly armored vehicle such as a halftrack.

Re: OoB of Sturmabteilung 7 [Sturmbataillon AOK 7.]?

Glad to find this.

I was reading in Osprey D-day 1944(2) Utah Beach and the U.S. Airborne Landings, that a "artillery" battery/detachment from the battalion was sited near Utah Beach west of Foucarville, during D-day, wheras the unit itself was stationed near Cherbourg.

I'm guessing they must have been talking about the battalion's 120 mm heavy mortar battery, then. The le IG infantry guns were almost line of sight direct fire weapons, right?

As to the question about the anti-tank rifles, I know they were issued to a number of the units assigned to defend the Atlantic coastline in France, especially the static coastal defense divisions.

Regards,
Remain yourself, in spite of all the mighty do.

My apologies for unearthing such an old thread, but I was wondering if anyone of you could confirm the use by this Sturmbataillon of MP-44/Sturmgewehr 44 in Normandy?

There are some pictures around the web showing either MBk42/MP-43-MP44 in Normandy, but the date or unit of those pictures are usually debatable.
Among other thing, I've sometimes read that some were issued to Rommel's entourage whicj, IMO, doesn't really make sense.

Then I've discovered this unit, Sturmbataillon AOK 7.
It is not made up of Rommel's "entourage" exactly, but it is a HQ unit, so maybe the information was badly copied/translated once, and it was meant a special unit directly under army command.
Besides, other reports state that the American encountered their first StG-44 near Cherbourg, which would fit the theory.

Can anyone confirm ... or deny?

I just saw your post, so sorry for the 3 year delay.

I don't know, but my guess would be that they would probably have had to make do with more dated weapons. I know the 12th SS Panzer division had them, probably in very small numbers, but I doubt that any of the static and/or straight infantry units were so lucky to see many of those rifles. I'm guessing that this unit, despite the impressive title of assault battalion, would have been similiar to a "fusilier" battalion, in the later volksgrenadier divisions, and some of the coastal divisions, and would probably have a higher percentage of submachineguns and other automatic weapons, than other infantry battalions.

Still, given the materiel poverty of the Wehrmacht in June of 1944, I doubt that any infantry units in Seventh Army were lucky enough to see many Sturmgewehr selective fire rifles. Just my opinion, mind you.

The one Normandy reference to an "assault rifle" in an after action report in my memory was from the divisional escort company of the 12th SS Panzer Division.
Remain yourself, in spite of all the mighty do.

In the 12 years since my original post I've done quite a lot of work on this formation and I've not found any evidence it received MP44. The battalion was a rather standard infantry battalion, with the exception of some of its subunits, but this does not involve additional automatic rifles.

As for the antitank rifles, based on several sources it actually seems unlikely those were regular at-rifles. Instead it seems it was confused with the Gr.B.39 (a reworked at-rifle) which is fairly common mistake/point of confusion on a Gliederung in 1944. I'm still open to both options, but without new evidence I'd put the Gr.B.39 at 95%.

Regarding the "artillery battery/detachment from the battalion", that refers to the battalion's battery with four le.FH.
Top

The Lfh of the art. were of txec(t) origin.

Is known which model of gun was employed?

The Czech guns were replaced with 10,5 cm le.FH.325(f) well before the invasion.
Top

the plan to create the Sperrverband 700 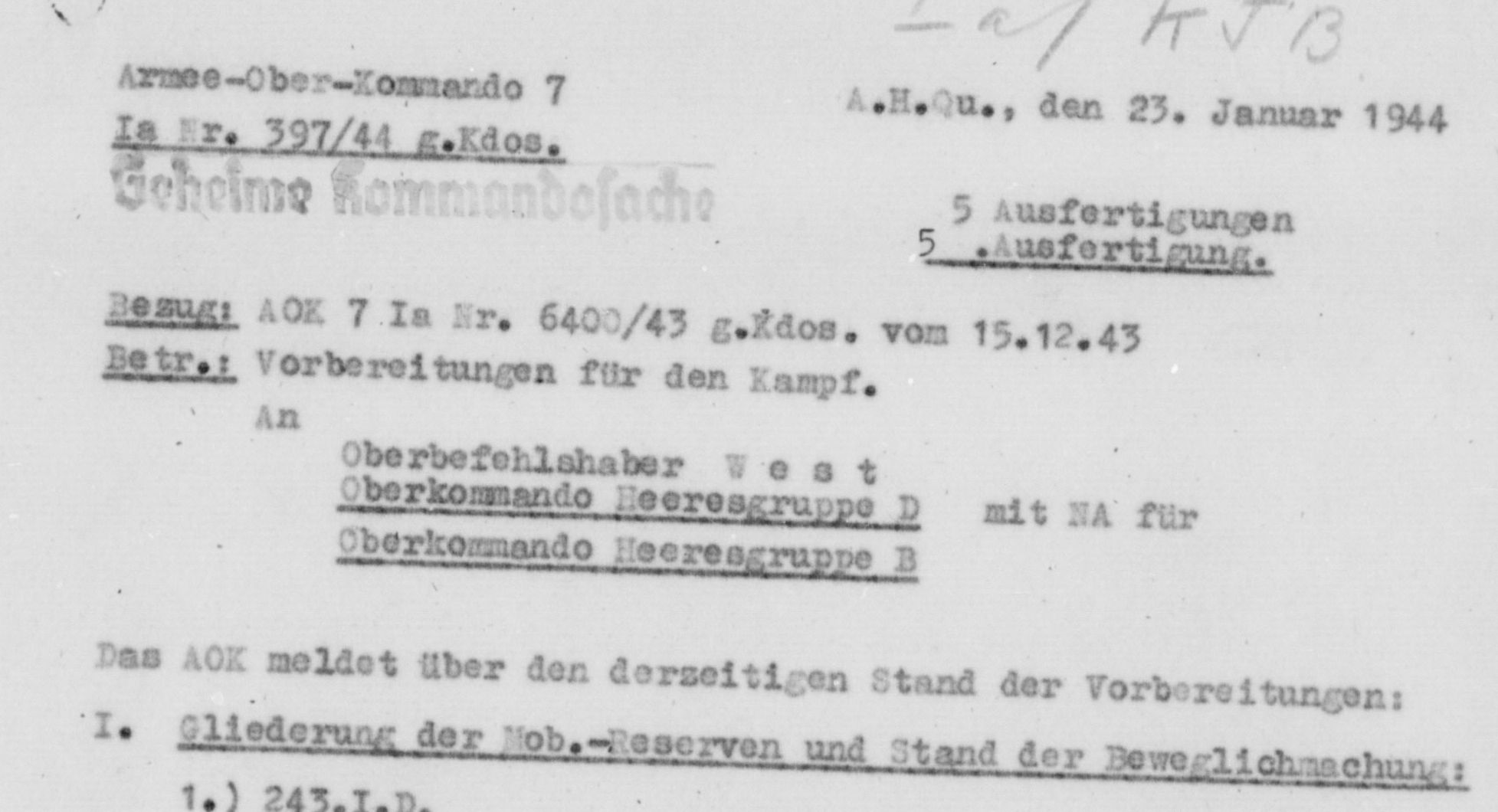 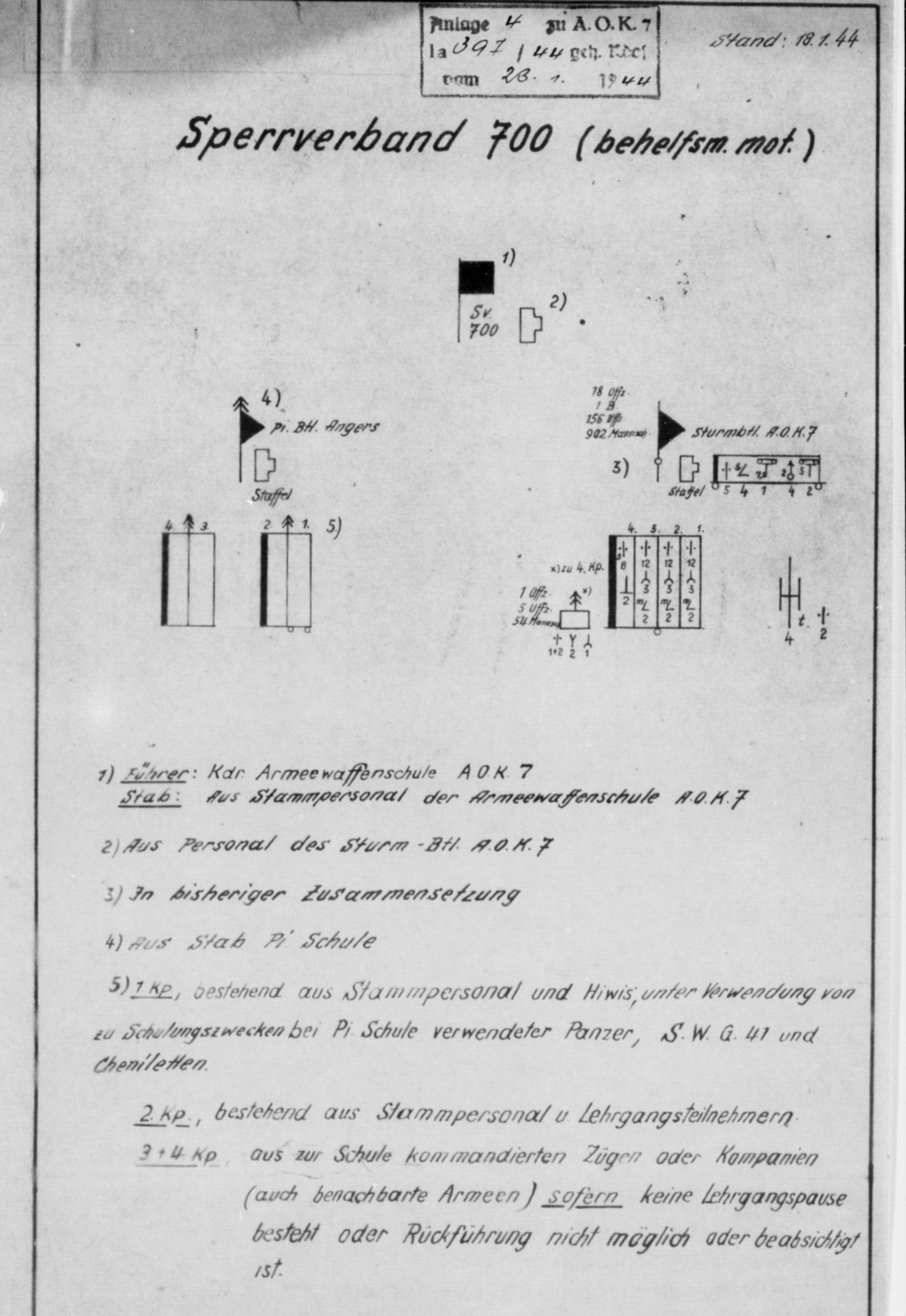