Discussions on the Winter War and Continuation War, the wars between Finland and the USSR.
Hosted by Juha Tompuri
12 posts • Page 1 of 1

Greetings, dear assembly !
On the given page there is a comment on use armoured Zis-5 truck in the Finnish army. It was actually?
http://www.o5m6.de/zis_5_armoured.html
In the chronicle of fights for Leningrad there is a mention of their use in the Ladoga Kareliya, probably, for support 3 regiment of the Leningad National home guard ( so called LANO, on russian ) in sector Tuulos-Nurmoila.
Best regards !
Top

There is at least one photograph in the photographic center of the Finnish defence forces showing an armoured ZIS after it was captured, location of the photo is unknown. It is known that at Tuulos armored lorries were sighted, so it is possible that the photo is also from there but it could also have been taken closer to Petroskoi. Weather it was used by Finns or not is not known. However, armoured lorries of type GAZ were used and they were photographed in the victory parade in Petroskoi. This information came from a friend of mine who studied the subject a couple of years back.

Here is the info I took from articles by Max Kolomiets. The most well-known Soviet home-made armored cars were armored trucks GAZ-AA and ZIS-5 which were produced by Izhora works in July-August 1941.
Leningrad army of citizens-in-arms [LANO] began to form 27.06.1941, the first 3 divisions of LANO moved to front in the beginning of July, 19.07.1941 the 4th division was formed, and after that - four Guard division [named Guard because they consisted from the best and most experienced workers of Leningrad], in September - 6th and 7th divisions of LANO was formed. So in total 10 divisions of citizens-in-arms were formed, also more than 20 battalions and regiments [160.000 men in total].
The management and party organization of Izhora works decided to produce armored cars for LANO divisions. But to use serial BA-10 [even produced above the plan] for this purpose was not allowed because regular army needed in them. So design office of Izhora works developed during 1 day the project of armour protection of GAZ-AA and ZIS-5.
The construction of those vehicles was simple - armored plates [6-10mm] protected engine and cab, two armored plates were installed along the truck body. There were two doors for crewmembers, heat radiator had two holes for air which were protected by armored covers. The project was approved by Leningrad communist party committee, which ordered to provide Izhora works with the necessary amount of trucks. The first armored cars were sent to LANO divisions since 15 July.
The armament of armored GAZ consisted of machine-gun DP or DT in the front of the armored hull, and machine-guns DShK, Maxim or DA on anti-aircraft mountis installed in the truck body [platform]. The part of armored cars had infantry Maxims instead AA machine-guns, Maxims were installed in armored half-turret above the cab. ZIS-5 had [in addition to DT or DP in the front of the hull] 45mm AT guns mod. 1934 or 1938, which were installed on the truck platform and could fire only ahead. Several ZIS were armed with 20mm guns ShVAK on home-made mounts instead of 45mm AT guns. Several photos dated October 1941 are known - armored truck ZIS-5 armed with 20mm aircraft gun ShVAK moved to the front close to Leningrad together with unit of Leningrad workers.
The was no special designation for those vehicles - they were called in differ ways in official documents: "armored car GAZ or ZIS, half-armored car IZ [Izhora works - BP] or medium armored cars IZ". It is hard to find the exact amount of produced armored cars but taken into consideration that every LANO division should contain armored squadron from 24 those vehicles [12 GAZ and 12 ZIS] it is possible to assume that Izhora works produced not less than 100 such armored cars.
According to documents - officially confirmed the presence of such half-armored vehicles only in two LANO divisions - 2nd and 4th, but it is possible to assume that 6th and 7th divisions formed in September also had such armored cars [photos of armored cars from corresponding period are known].
Those armored cars are mentioned in the documents from the end of July - beginning of August 1941. For example, the report from 26 July, 1941 mentions: "14th artillery brigade: 40th separate tank battalion - 2 T-26, 2 armored cars; 44th separate tank battalion - 12 45mm guns, 12 AA MGs on armored cars". According to documents from 27 July, 1941 - 2nd and 4th divisions of citizens-in-arms and 191st infantry division had 79 armored cars the most part of which were half-armored trucks. 1 August, 1941 - 4th LANO division had armored squadron with 24 armored cars, 25 AA MGs, 142 men. Commander of 4th division reported on 7th August - "Company of armored cars - AA MGs (10 MGs) - in 1st infantry regiment, AA MG armored squadron [13 vehicles] placed to cover the division HQ".
The most part of half-armored cars of Izhora works was lost in combats at the approaches to Leningrad in July-September 1941 [the photo of damaged and abandoned armored truck ZIS-5 is known, approaches to Leningrad, autumn 1941]. Several half-armored cars were captured by Finns and were used by them till spring 1942 - the photo of captured armored truck GAZ-AA by Izhora works in use by Finnish army is known [dated 12 October 1941, Petrozavodsk], also the photo of abandoned by Red army armored truck ZIS-5 to the west from Petrozavodsk is known [autumn 1941, Finnish tanks moved along the road where that ZIS-5 stayed].
But despite losses, Leningrad front had on 10 May 1942 - 46 half-armored trucks [14 ZIS and 32 GAZ], from them - 55th army had 10 GAZ [1 in 72nd infantry division, 1 in company guarded army HQ and 8 in 267th separate artillery-MG battalion] and 6 ZIS [3 in 125th infantry division, 2 in 2nd separate recon battalion and 1 in 267th separate artillery-MG battalion], 8th army had 22 GAZ [1 in 10th infantry division, 6 in 1st separate recon battalion and 15 in separate mortar armored squadron] and 8 ZIS [1 in 10th infantry division and 7 in separate mortar armored squadron]. At least one armored ZIS-5 participated in combats during breakthrough the blockade of Leningrad in January 1943.
Also Izhora works built several another armored cars of different constructions. For example, one German unit located near Leningrad used captured armored car [chassis from GAZ-AA, changed front hull from BA-10 welded to armored box with side hatches and observation turret above] during the winter 1941/42 [two photos of that captured armored car are known]. Also the photo of similar vehicle but with the front part of armored truck GAZ and panoramic sight on the top is known. Also one photo shows armored car on ZIS-6 chassis with the hull looked like from half-armored ZIS-5 and turret from BA-6 [ptobably, from T-26 or BT], most probably, only several such armored cars were produced, but exact amount is unknown.

P.S. If somebody needs in the photos mentioned above [including half-armored trucks in Finnish and German service] - my PM box is open for you

The first photo was made October 5th, 1941 at approaches to Leningrad; that was armored ZIS-5 armed not with 45mm naval gun 21-K but with 20mm aircraft gun ShVAK on special mount according to Kolomiets. 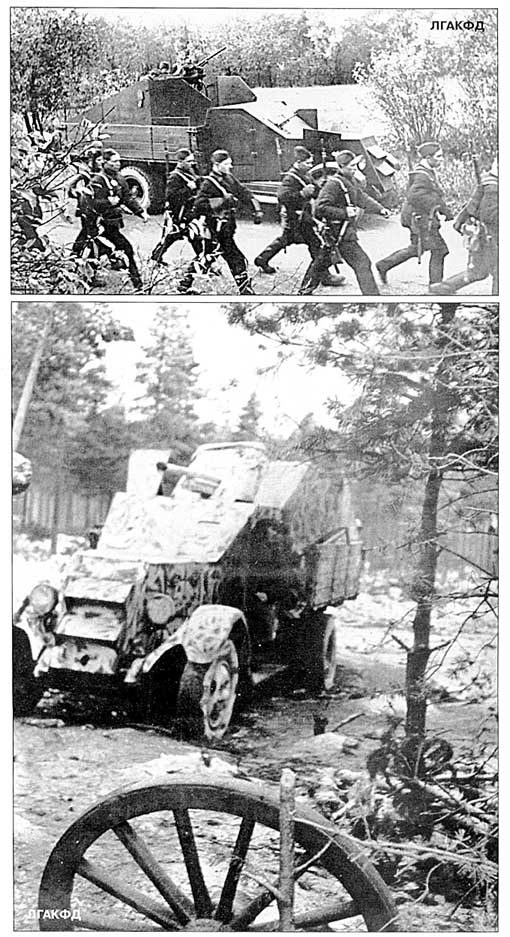 Greetings !
Thanks for comments !
To you, mister BP, has sent the message on your E-m.
Best regards !
Sergei Zakharov / kansa2@yandex.ru
Top

You are welcome, kansa2!

OK, BP !
By the way, the nickname"armour-saur" has sounded in the Soviet military film of the seventieth years
" Izhora battalion ", about defense of a Izhora^s factory in WW2.
Best regards.
Sergei.
Top

Here are several photos of members of Izhora citizen-in-arms battalions during the battles for Karelian Isthmus and Leningrad in 1941.
http://www.poklonnayagora.ru/leningrad.html

Photo from http://www.weltkrieg.ru : workers of Izhora works as crewmembers of BA-10, to the left - commander of battalion of Izhora workers Chernenko.

Interesting information Big Panzer ! There are always new nuggets of information for those who dig into history. Regards Tero T
Top

You are welcome Tero! As I've already mentioned - if somebody from Finnish friends needs in photos of captured/abandoned armored trucks ZIS-5 in Finnish service, let me know! I can't post the photos from books/articles here because of copyright [and I can't find them online

Re: Russian Zis armour-saur in the Finnish service ?

Hi !
Addition on this theme - 7 pages from Russian reenactors forum with interesting photos and drawings.
For example -
page 1 http://www.livinghistory.ru//index.php? ... 12206&st=0

There is at least one photograph in the photographic center of the Finnish defence forces showing an armoured ZIS after it was captured, location of the photo is unknown. It is known that at Tuulos armored lorries were sighted, so it is possible that the photo is also from there but it could also have been taken closer to Petroskoi. Weather it was used by Finns or not is not known.

Regards, Juha
AHF Bookstore - How you can support AHF - Get your AHF gear
Top
12 posts • Page 1 of 1