Discussions on every day life in the Weimar Republic, pre-anschluss Austria, Third Reich and the occupied territories. Hosted by Vikki.
8 posts • Page 1 of 1

Small on-going project on Cenotaphs around the world, their history and when and how they are being used as memorials. As my small collection seems to be seriously lacking quality quantity on this topic I will therefor be mainly relying on libraries and members that have interest and resources and who wish to contribute.

Cenotaph: n. a monument to a person who is buried elsewhere. Cenotaphic adj.
[Webster’s Universal]


First Part is focused on Cenotaphs around the world modeled on and including the original at Whitehall, London.


Part I - The Whitehall Model

The Cenotaph at Whitehall was designed by Sir Edwin Landseer Lutyens (1869 – 1944). As well as this London memorial he also designed cenotaphs at Manchester and Johannesburg and others. He was involved in projects like planning New Delhi ((or helped plan) including the Viceroy’s palace) and the British Embassy at Washington D.C.
http://www.encyclopedia.com/topic/Sir_E ... tyens.aspx\ 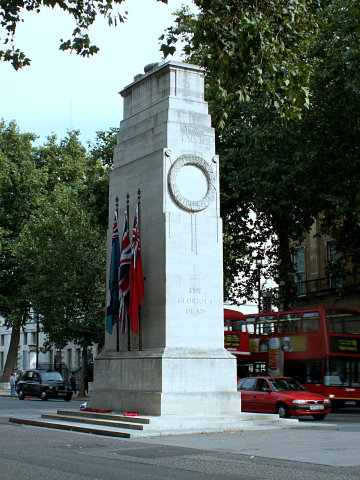 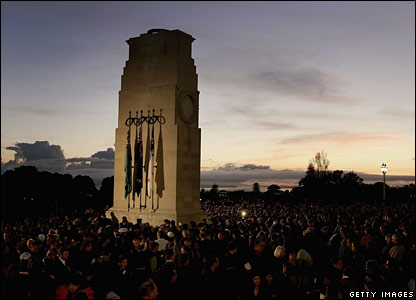 In the centre of the road in Whitehall, the Cenotaph commemorates the fallen of the First and Second World Wars. Designed by Sir Edwin Lutyens, it was first constructed in plaster as a saluting base for the Victory March of 19th July 1919, was rebuilt in Portland stone and unveiled on Armistice Day, 11th November 1920, as Britain's national memorial. An additional inscription commemorating the dead of the Second World War was unveiled in 1946 by George VI. On the Sunday nearest to 11th November each year a national service of remembrance is held here, attended by the monarch, statesmen, and representatives of the diplomatic corps, Commonwealth and armed forces, together with, since 2000, civilian organisations such as ENSA (Entertainments National Service Association), whose members entertained the troops.

[~King George V's laying of the first wreath was therefor at the plaster version or the date (of the above picture) is off by a year.]
Top

Shameful to see the Chinese flag taking pride of place on the cenotaph now whilst the contributions of British and Canadians in helping rid China of the Japanese are ignored in this country.
Top

But the War Cemetery in Hong Kong continues.
http://www.nationalpost.com/story.html?id=2309777

HONG KONG -- Every year, on the first Sunday in December, a few dozen veterans, military officers and government officials gather at a hillside cemetery here that is the final resting place of Canadians killed defending Hong Kong against Japanese forces in 1941.

On Sunday, a Canadian prime minister attended that ceremony for the first time as the group marked the 68th anniversary of the 17-day defence of what was then a British colony by the Winnipeg Grenadiers and Les Royal Rifles, a regiment from Quebec.

They arrived by boat in November 1941 and, within a month, were involved in what would be one of the fiercest battles of the war. Nearly 300 would die in that battle and 283 are buried here in Sai Wan War Cemetery.

Keir wrote:Shameful to see the Chinese flag taking pride of place on the cenotaph now whilst the contributions of British and Canadians in helping rid China of the Japanese are ignored in this country.

They still remember 11/11/18 every year -poppies for veterans assc the whole nine yards...maintain foreign war graves etc. China argubably suffered the most under the Japanese and both the nationalists and communists fought them along side the the allies but things become murky now and are never simple. Anyway, the commies control China now along with all the old colonial possessions and territories (save Taiwan) and they are behaving fine (PLA are quite low key) so nothing surprising.

My greatest fear is that the developers get ideas about tearing it down in place of a mall or hotel.

got to love the flags/the people/the whole scene - the picture is a spice of contrast - it is great.