Discussions on books and other reference material on the WW1, Inter-War or WW2 as well as the authors. Hosted by Andy H.
Forum rules
You can support AHF when buying books etc from Amazon, Amazon.co.uk and Amazon.de by using these links.
It costs you nothing extra but it helps keep the forum up and running.
4 posts • Page 1 of 1 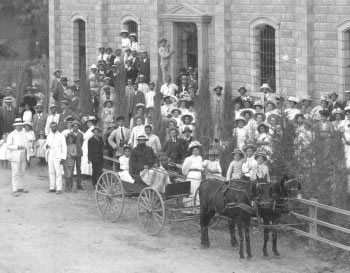 
"The bitter truth about the Nazi Fifth Column in Palestine certainly deserves to be told. It is hard to believe how fast a majority of German settlers in Palestine, most of them hardworking and deeply religious, turned to Adolf Hitler for guidance and directives during the early 1930s, as detailed in Nazis in the Holy Land, 1933-1948.

The German settlement in Palestine started in 1868, when a large group of German Tempters landed in Haifa Some of those who reached Jerusalem in 1873 believed tbey had reached the biblical Valley of Rephaim, and so they named the main street of their new. settlement Emek Refaim. Other groups settled in Haifa in 1873, in Sarona in 1871 and in Wilhelma in 1902.
Most were dedicated, disciplined agricultural pioneers.

All this changed on July 16, 1932, when Ernst Wilhelm Bohle, of the Nazi German Overseas Department, ordered Karl Ruff, a German architect and high Nazi official in Haifa, to start a Nazi group in Palestine. Within a few weeks the fist six Nazi party members had persuaded almost all of the approximately 2,500 Germans living in Palestine, most of them born here, that as good Germans it was their duty to trust, support and cherish the Nazi party- and Hitler.

Except for a few opponents, they became a very closed, secret Nazi operational group. They spread anti-Semitism among the Arabs, for whom Berlin had printed a special edition of Mein Kampf. In 1935, German consul-general Heinrich Wolff left Jerusalem for Germany because he was married to a Jewess. He was replaced by Walter Doehle, a loyal Nazi official.
Once the Palestinian branch of the National Socialist German Workers Party was established, Germans started watching each other to see who was the more eager Nazi, and executing orders from Berlin. They attended regular propaganda meetings, listening to the racial doctrine taught by visitors from Germany. On Nazi and German holidays, flags adorned with swastikas were displayed on consulates and by German settlers, who marched in and around their settlements in Sarona and Wilhelma (neighborhoods in and around Tel Aviv), Haifa and Jerusalem, proudly carrying them high to the anger of the Jewish population.

Jews objected to and criticized these activities, but it was up to the British administration to take appropriate action, which it failed to do. The Palestine Post and the Hebrew press published numerous news items on such provocations, but the Mandatory power was silent until World War 11 broke out.

On the eve of the German assault on Poland, August 31, 1939, German vice-consul Otto von Ernst Ecker ordered all Germans in Palestine of draft age to report to Germany. The same night, the Greek steamer Paris sailed from Haifa with 322 draftees and 88 family members on board. The men were subsequently trained in the Brandenburg Training Regiment for Special Tasks, a private army of Abwehr military intelligence. They took part in several joint German-Arab parachute actions in 1943 and 1944, in order to smuggle weapons into Palestine as well as to incite and recruit Arabs against Jews.

In Operation Atlas, one such five-man commando landed at Jericho on October 6, 1944 It consisted of three well armed Germans and two Arabs selected by former mufti Haj Amin al-Husseini. Their commander was Col. Kurt Wieland, a Palestine-born German from Sarona. All five were caught and interned by the Mandatory Police.

A chapter dedicated to World War II recalls how the mufti met Hitler at the end of November 1941, expressing to the German chancellor his personal admiration and the Arab eagerness to fight together against the Jews, the English and the Communists. Many German settlers were waiting for field marshal Erwin Rommel to break though Sinai into Palestine, and end Zionism and the Jewish settlement.

The author presents us with a detailed description of Nazi methods of youth education and discipline, as well as the enforcement of special aims for German girls and women. The few opponents to the Nazi regime, mostly outsiders, were quickly isolated and ignored. The already complicated German-British-Jewish and Jewish-Arab relations were further complicated by the arrival of German Jews. No sooner had such Jews arrived, than German settlers appealed directly to Berlin to ban at once the immigration of German Jews to Palestine.

During World War II, the Mandatory administration arranged three population exchange operations (December 1941, November 1942, July 1944) between Palestinian citizens interned in Nazi-occupied Europe, and Palestinian Germans. The Jewish arrivals from Europe brought with them the first authentic proof of the Holocaust. Palestinian Germans were interned in 1939 and deported to Australia in 1941. A few that were allowed to stay, nevertheless departed in 1950. After the war, many German settlers claimed they were the victims of unjust persecution and that they had always had proper business relations with Jewish customers, physicians and farmers. They complained that since the outbreak of the war, they faced arrest, internment, expropriation and deportation. They had suffered greatly, they said, and considered themselves to be the victims, unfairly treated and falsely accused of supporting the Arab revolt.

However, the facts speak for themselves. By embracing and serving the Nazi regime, they displayed a shocking lack of respect aud responsibility as good neighbors. They constantly provoked their Jewish neighbors with celebrations in honor of Hitler and his party, and this in the Holy Land - which had always stood for completely different values. They perceived Jews as representatives of capitalism and materialism, enemies of the Arabs, intruders destroying the Arab culture and agriculture.

An appendix contains.the names of Germans who joined the Nazi groups in Palestine. Included are the Official Guidelines for Nazi Party Members Abroad and a list of Palestine-born Germans who joined Nazi branches abroad. There is also an extensive. bibliography, documentaries, correspondence, interviews and an index. "

Does anyone have the appendix referred to in this article?
Top

Hi Von Schadewald, hello to all of you,

I would like to add some information from my data files about a Leutnant Ruff from Haifa who became a Brandenburger, a member of Gruppe II (Sabotage) of Abwehr's Kriegsorganisation Istanbul and later an officer of Frontaufklärungstrupp 217/ 218 and was at the end of the war with Leitstelle für Frontaufklärung II Südost in Vienna and later Pertisau.

So, maybe you have helped me to identify Ruff's forename.

Footnote of history: The Israeli intelligence service Mossad had its first headquarters in the former templer colony in Tel Aviv.

I have some other members of Abwehr II/ Frontaufklärungseinheiten II from Palestine in my files but they are not necessarily German Templers.

Best regards
Robert
You do not have the required permissions to view the files attached to this post.
Top


A German book which covers the topic of Nazi Germany's policy towards Palestine and its inhabitants including Abwehr operations is the following one:

Best regards
Robert
You do not have the required permissions to view the files attached to this post.
Top
4 posts • Page 1 of 1

Return to “Books & other Reference Material”