Discussions on the vehicles used by the Axis forces. Hosted by Christian Ankerstjerne
194 posts

These are all monobloc?
Top Thanks for the drawing image, it caused me to find Zeichnung Nr 13C1310 of the monobloc PzGr. 39/43 and realize my careless mistake! PzGr 88 never was made in a welded version like Panther 75 mm APBC . . .
Top

The Germans gave up on the welding AP as it introduced much expense and manufacturing delay. And, in the end, was found to be unnecessary. I have seen earlier 5,0 cm PzGr that were welded as well. By the time the larger 88mm AP was manufactured, it was gone.

The Panther ammunition was manufactured in decent quantities long before the summer of 43, and given the teething problems and losses of Panther, I imagine they may have had stocks till the Panther fleet had built up numbers. Not so for the PAK 40 and KWK 40 weapons. They were responsible for a large part of tank kills in 1943 and they could not wait around for a slow ammunition manufacturing process that was not really needed.
Top

I believe this is the chart? 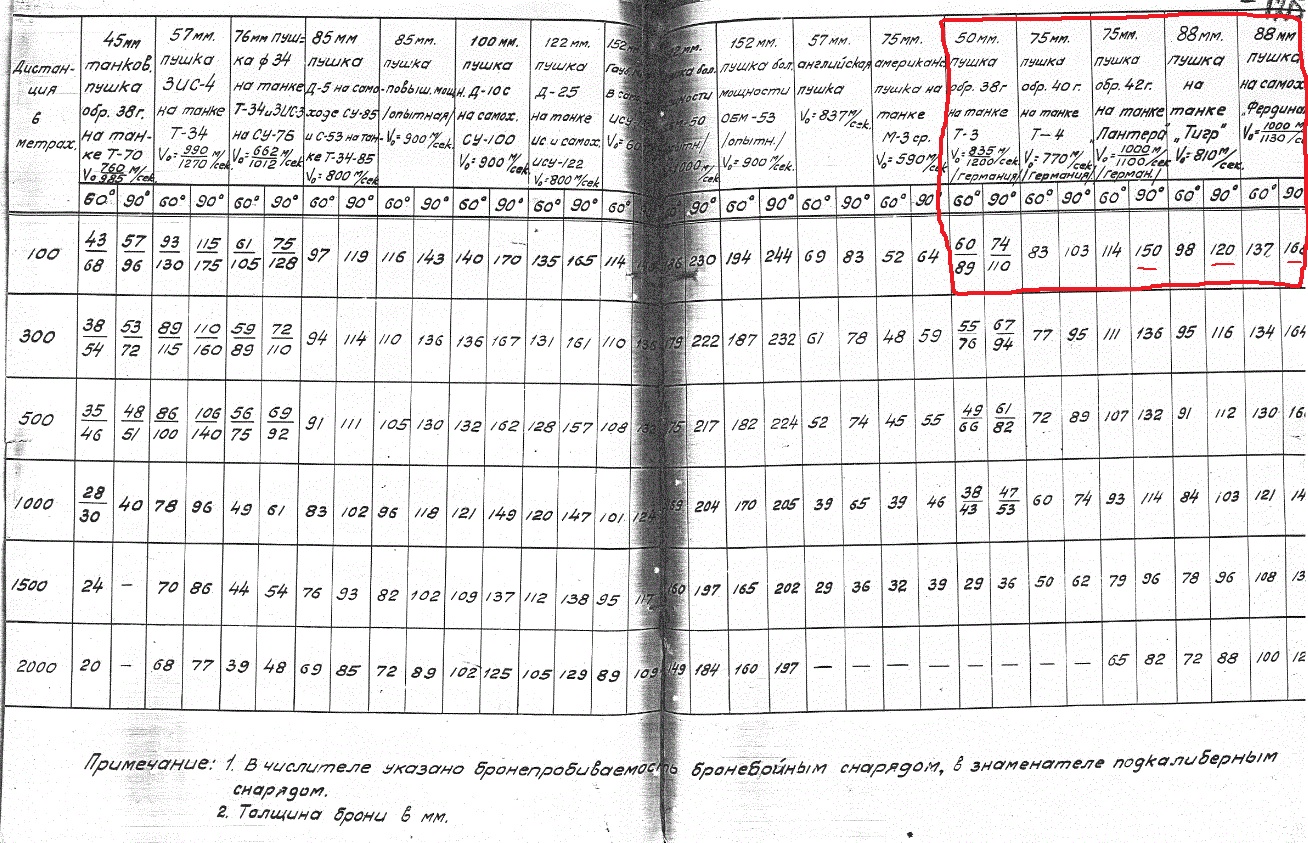 I think most people take that chart with a sack of salt...

I would welcome primary sources. It's amazing how secondary sources are re-quoted till they become the defacto-internet truth.
Top

Actually, that chart seems to show the early 88mm 'flak' round. Still, there are questions...what armor is it supposed to penetrate, etc.?

Yes, the German 88 MM m/v of 810 m/s second is wrong for the Tiger I's gun. I haven't used DeMarre to check the velocities of the Flak FT compared to what the formula would yield in relation to the chart's at range figures, since I do not not regard them as valid . . .
Top

88m Pzgr 39 performance in soviet firing tests vs IS3:

IS3 turret cast armor. The turret tested was made from hardened cast armor. Cast armor can be expected to be significantly inferior at high oblique impact to RHA. In the 90mm to 100mm thickness range, cast armor was ca. 20% to 30% inferior to german RHA. In correspondenc eto these trials, the IS3 turret armor had to be considerably reinforced in armor thickness.

IS3 glacis plate of 110mm. Nothing significant can be gained from this test, however, starts of cracks at 971m/s indicate too britlle armor.

IS3 nose plate of 110mm. This armor plate shows inferior levels of ballistic resistence compared to german RHA in this thickness. Penetration at 971m/s shouldn´t be expected outside the 95mm-100mm range if it would be on par with german RHA. Apparently, this soviet IS3 RHA was at least between 10% and 16% inferior to german RHA under this high oblique impact. The large spread between complete penetration and protection likely should be viewed as an artefact of the testing, and indicates that the lower limit of ballistic performance have not been reached yet. Complete penetration of soviet 110mm RHA at 55° therefore occurs somewhere >844m/s but <971m/s.

IS3 Side armor of 90mm RHA: Behaved as good as german RHA in this thickness range. Also the 90mm RHA inclined upper side plate incdicates good quality, though this is less certain due to the possible effect of spaced plating in stripping off the AP-cap of the Pzgr39. The lower cast armor quality becomes tellingly apparent when one considers that the 90mm RHA upper side plate could not be penetrated at 980m/s by this projectile while the thicker, cast turret would be completely perforated at only 900m/s.
The level of ballistic resistence offered by the 90mm RHA upper side plating (+ spaced plating) on the other hand was on approximately the same level as the 110mm pike plate (in both cases, cracks at back surface started at 975 & 980 m/s but no complete penetration). This also points towards good quality 90mm RHA plating but ca. 10%-20% inferior ballistic resistence of the thicker, 110mm RHA plates.

Tests conducted at 55° vs US RHA of 92mm thickness penetrated twice at 3334fps (1016m/s) in broken up condition and failed once to completely penetrate (hole through) at 3310fps (= 1009m/s). In all cases the projectile shattered

Tests conducted at 45° vs US RHA of 130mm thickness showed four failures due to shatter at velocities between 772m/s and 979m/s, causing twice holes and twice through cracks in the plate. A fifth projectile, fired at a velocity of 1002m/s penetrated completely, but with broken nose and base damage.

It´s possible -and in my opinion even probable- that the 88mm Pzgr39 projectiles used in US trials were passed before autumn 1944 and therefore were made according to the older 30° proof angle specification. Under the 30° tests, the 88mm Pzgr 39 rarely broke up in US trials and behaved superior.
The presumption that these 88mm Pzgr39 were not up to the latest specifications is supported by the fact that neither of the five projectiles passed the relatively soft 130mm armor plate at 45° in a condition fit to burst -whether they penetrated or not. However, intact penetration of 130mm german RHA was required in the revised service acceptance conditions 1944.
In a second series of trials at the US Army PG this was achieved even by the 75mm Pzgr39 ammunition, which penetrated 132mm US RHA at 45° with 962m/s & 996m/s, in both cases with the projectile intact through the plate (no break up or deformation). At velocities below 3099 fps (945m/s), the 75mm Pzgr 39 tested at the USAPG rejected off the plate but in three of four cases it rejected intact -again without break up, whether or not it penetrated.

Therefore, it´s really difficult to assess US armor quality from this trial alone. The good ballistic resistence of the softer US RHA seems to me more an artefact caused by insufficient 88mm Pzgr39 projectile strength of the lot of projectiles used in the trial rather than an attribute of superior reistence of the armor plate. Else, the 75mm Pzrg39 would have to be reviewed as vastly superior to the 88mm Pzgr39 in oblique impact, an idea which,considering other availabe evidence, is not believed to be the case.
Top

Yoozername wrote:I believe this is the chart?

Miles Krogfus interpretation on this table has turned out to be entriely correct. The penetration figures in this table are CALCULATED with De Marre K=2400 (Расчетная при K=2400).
they do not represent actual test data -at all- and in regard to german guns in particular, indicate only an estimate which would be right only in case had they fired the soviet inferior APHE/APBC-HE projectiles instead of the virtually indestructable Pzgr39.

I have added the missing front page to this memo to proof Krogfus´s argument. Notice that Peter Samsonov likely knew this front page when he posted the table and decided to outright lie about the charakter of the penetration data when asked about it, presenting them as if they were actual firign trial results...
You do not have the required permissions to view the files attached to this post.
Top 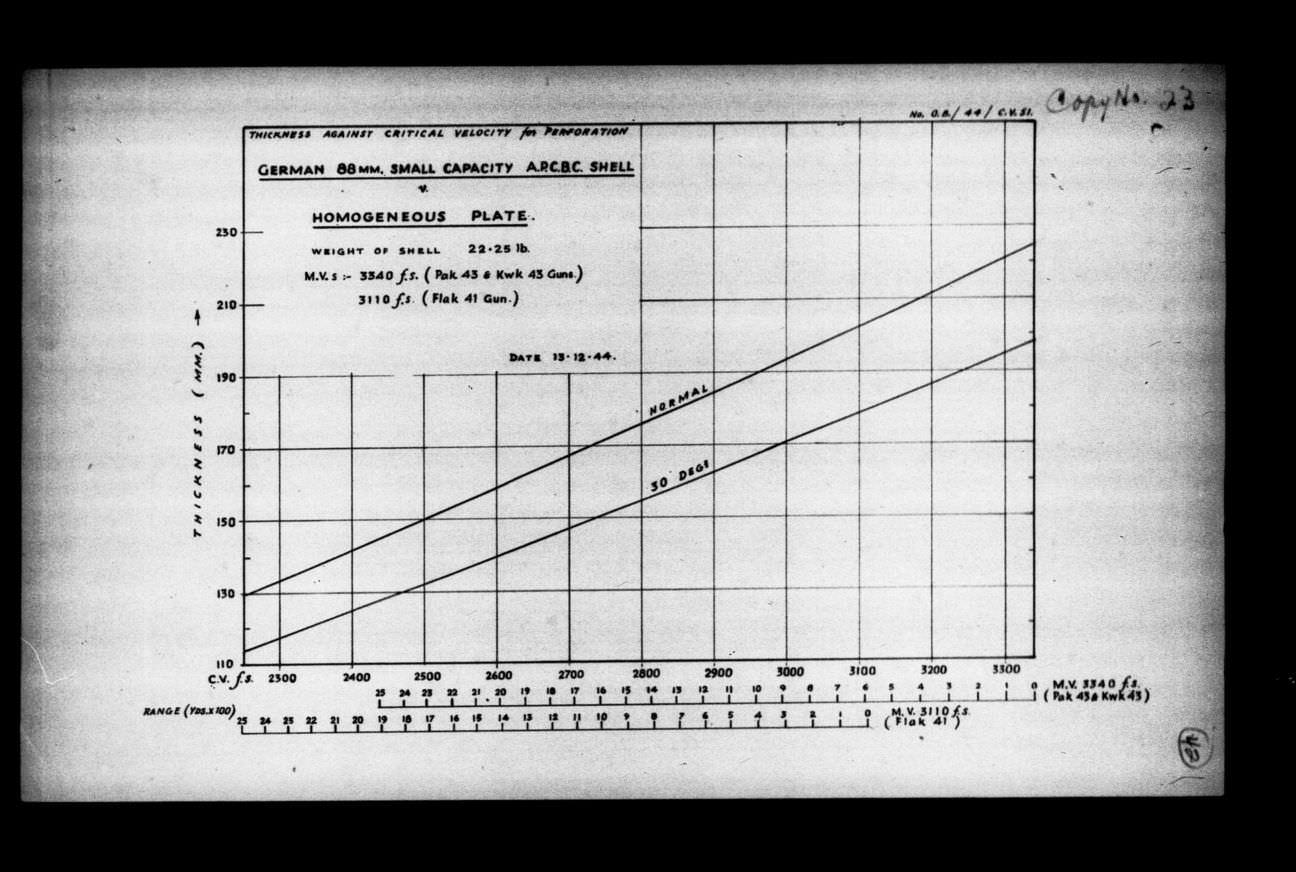 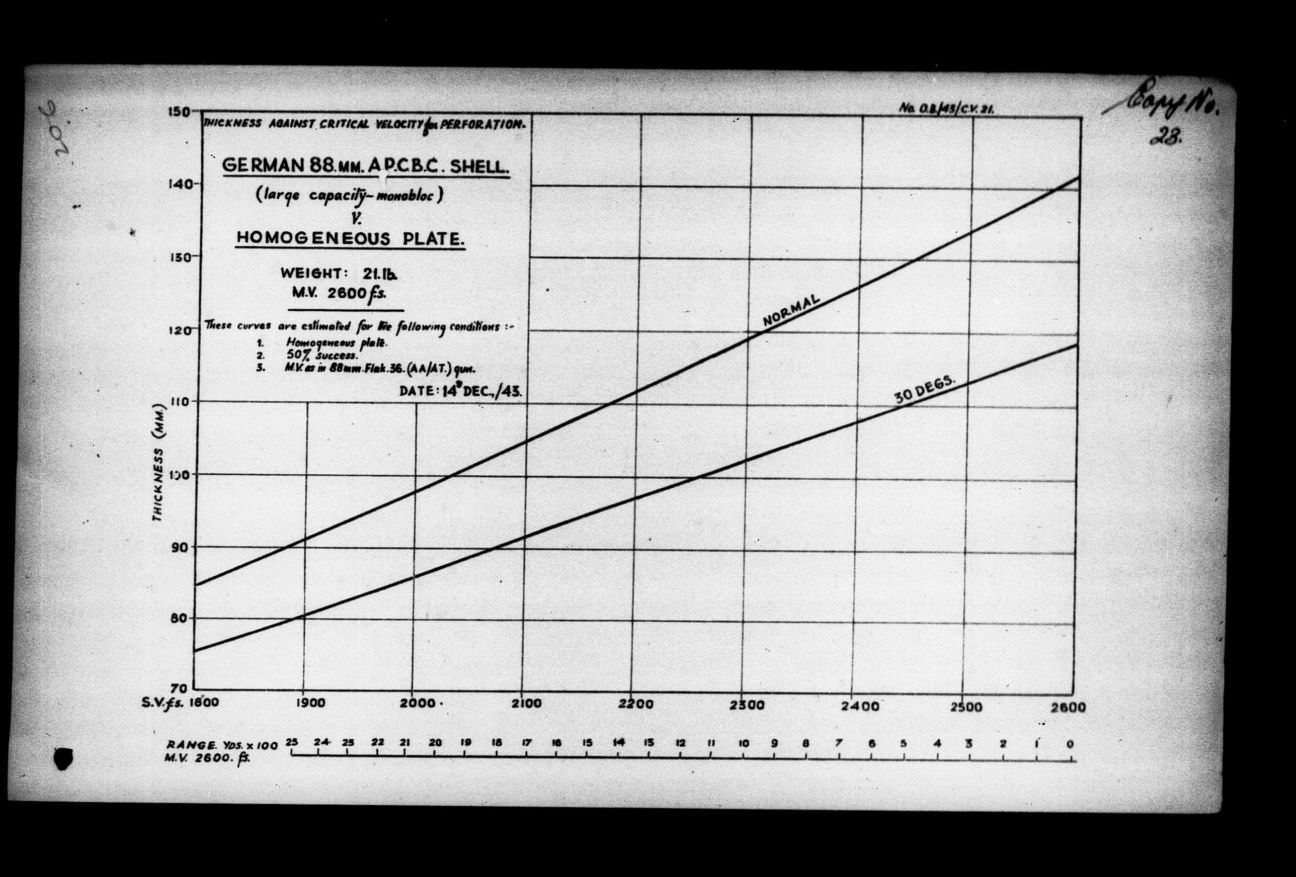 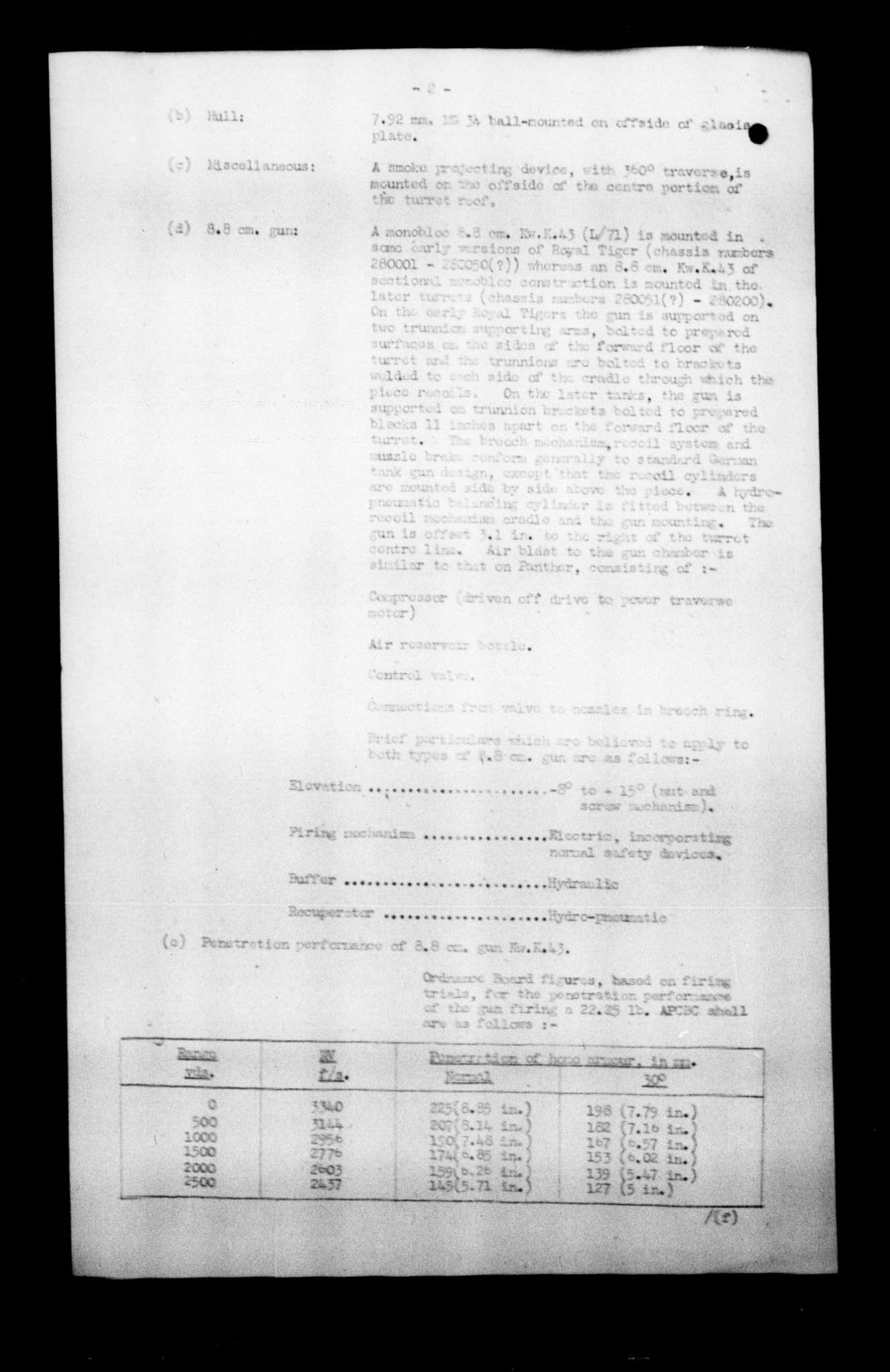