Discussions on the fortifications, artillery, & rockets used by the Axis forces.
8 posts • Page 1 of 1

Here is a shorter, better version of my AFV News article:
Top

Correction: to get AP performance at different angles, raise 1/cosine of the angle by 1.42857. These penetration figures give the official WW II Soviet firing tables figures. However, when Russian AP was test fired by the Americans and British, different striking velocities and armor plate hardness affected the actual angle deflection amounts.
Top

It is always problematic to compare different data. Soviet penetration values were acquired from testing while "foreign guns" in the respective tables were calculated with a DeMarre formula, with their own systems used as reference.

Using DeMarre can be misleading. They only produce reliable results if shell quality is similar (plate differences can be neglected as the value will only vary by a few percent), so naturally American and British figures will be different.
Top

My AFV News Article is below. Raise 1/cosine of the strike angle by 1.42857 to obtain the official penetration. Note that the "special" version of BR350B was simply what careful, more time taken production at SOME projectile factories could produce. As the need for adult males in the military developed, more women and teen age children took over these tasks as adult males departed factories. Thus any improved AP projectile C figures were not typical . . .
You do not have the required permissions to view the files attached to this post.
Top

It appears that russian penetration tables which include german AP frequently are calculated using the same De Marre coefficient (K=2400 @ 90°) as was used for their own shells. This article sheds some light on how they treated their own AP, and a reasonable approximation for the enemy in absence of actual firing trials would of course make use of the same plate-projectile interaction factor.

To put it into context, the same De Marre K=2400 factor was used in the turn of the 20th century to describe the penetration of KC face hardened naval armor for uncapped (!) steel AP-shot. Of course, the steel AP always suffered complete shatter vs KC. Against the homogenious nickel steel armor, for which this armor penetration formula was originally conceived by Mr. de Marre in the late 1880´s, and which was unable to damage a good quality, large calibre steel AP-shot, the De Marre K was considerably lower (K=1680), expressing that the amount of nickel steel armor which could be penetrated by a steel AP-shot was significantly larger than the amount of KC armor which could be penetrated by the same shell.

We have reason to assume that soviet domestic ww2 medium and high hardness armor was succesful in breaking up uncapped soviet domestic AP much like steel AP was broken up by KC, due to the inferiority of soviet domestic APHE and APBC-HE to negotiate impact while staying intact against a discriminate armor target at velocities >600m/s.
When the germans captured soviet ww2 documents they were surprised to recognize that the De Marre K=2400 used for soviet armor penetration calculations was the very same one they used themselves ca. 40 years previously for KC armor vs steel AP interaction. Hence, they thought initially, that the soviet calculations were against KC armor, not against homogenious armor.
German mid/late ww2 AP developed far enough to prevent any nose damage effects inhibiting it´s penetration performance at velocities under 1250m/s -at least when striking normal or at 30°- and consequently had a much lower De Marre coefficient than those 76.2mm mentioned in Miles article (notice, I did not include the COS(a) function because it does not correlate well with the historically reported obliquity effects) :

If I plant the numbers for the 75mm Pzgr39 vs german test RHA plate -of which I have enough test sample data-, the De Marre coefficient to match german test results is significantly lower than the soviet data:

High hardness armor did not resist well unless it was able to break up the penetrator. Failure mode was generally by plugging, even when the projectile received no damage.

The break up occured with the 75mm K. Gr. rot Pz. at ca. ~550m/s when striking at 60° (30° off the perpendicular) despite the presence of a light armor piercing cap. Unfortunately, I have no data on 90° tests with this older series AP projectile.
Top

The following data was taken from a comment posted here: http://english.battlefield.ru/tank-arma ... ation.html
I couldn't contact the OP to verify this information, so let's not jump to conclusions from this.

Some of the following numbers seem to be a mix between 0° and 30° values, btw:

I've tracked down the copy of the very same AFV News volume where Miles published his research. The very next page after those he posted here, is this: 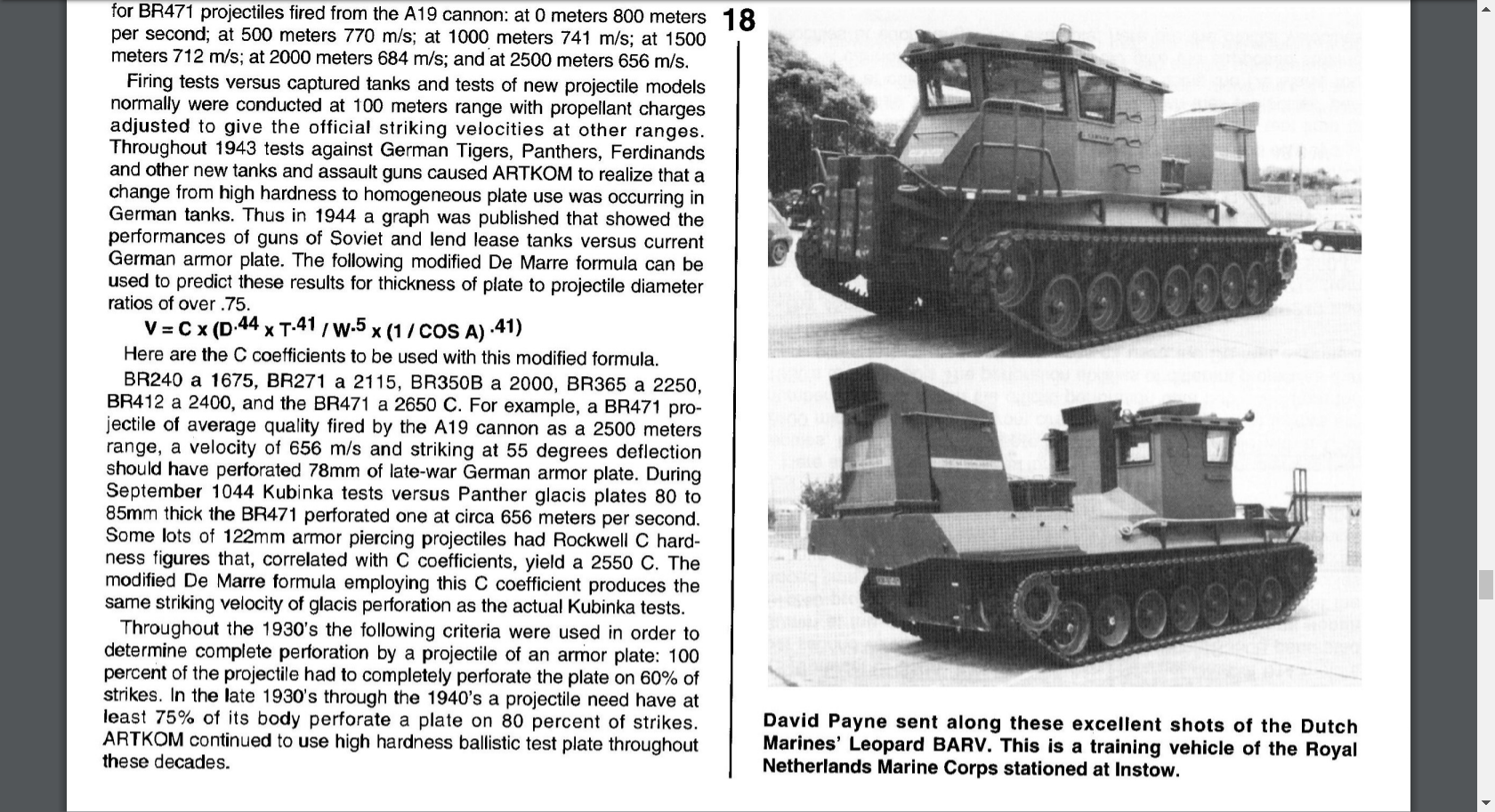 This "improved" DeMarre formula gives some interesting results, not too dissimilar to those from this graph.

I prefer working with this formula in the following form. Other pairs of n and K constants may work for other obliquities. For example n = 1,585 and K = 2250 s = 0 describes pretty well the british APCBC shells performance at 60°.