Discussions on the Allies and the Neutral States in general and the countries that does not have sections of their own.
5 posts • Page 1 of 1

Lots has been written about German miracle weapons - the real like V-1/V-2, and the less-real, back-of-the-napkin projects.
But the Allies have their own "miracle weapons" too. It would be interesting to list them, and compare to the German weapons: miracle weapons against Wunderwaffen.

The Vollum Strain of the anthrax bacterium: nasty but reliable, getting more and more virulent as it spread. Supposedly in 1944 Churchill approved a proposal to order 500,000 anthrax bombs from the United States.

Six German cities were provisionally selected as targets: Aachen, Wilhelmshaven, Stuttgart, Frankfurt, Hamburg and Berlin. They were all to be attacked in a single day by a force of 2,700 heavy bombers carrying over 40,000 cluster bombs. Twelve cluster bombs to the square mile; 1,273 anthrax bomblets in that square mile. An almost total saturation of bacteria. The cities would have become a wasteland. According to the scientists' report 50% of the inhabitants might be killed by inhalation, many more might die through contamination of the skin. This would have meant a death toll of around three million people.

Republic-Ford JB-2: a copy of V-1, over 1000 produced. Not bad for bombing, especially that their aiming could have been corrected by spotter planes.

T-54 main battle tank: despite its name the first prototype was ready at the end of 1945, and was mass produced since 1946. With its 100 mm gun was vastly better than anything available at that time.

AN/APQ-7 radar bombsight: thanks to its phased array antenna, provided a map-like image of the ground up to 170 miles in front of a bomber, used over Japan.
apq-7_scope_image_-_national_archives_and_record_administration_342-fh-3a03257.jpg
Anything else?
You do not have the required permissions to view the files attached to this post.
Top

#3 The cavity magnetron, enabling centemetric radars used in a variety of radars for airborne interception, bombing (H2S/H2X) Gun laying and mortar location oh and artillery shells (VT Prximity fuzes) Throw away a radar with each round fired.

#4 The science of fire bombing. Allied bombing raids were 10-100 times as lethal as the German blitzes.

#7 The Bailey Bridge. Not sexy, but revolutionary in expediting bridge building.
Top

#5 twas the french who first fielded APDS in 37mm and 75mm guns back in 1940.
"There are two kinds of people who are staying on this beach: those who are dead and those who are going to die. Now let’s get the hell out of here".
Col. George Taylor, 16th Infantry Regiment, Omaha Beach
Top

Magnetic Anomaly Detection (MAD) + AN/CRT-4 sonobuoy: airborne MADs were used to detect submarines, but they were frequently too sensitive and prone to false positives, in case of doubt sonobuoys were dropped - detection was possible up to 3 NM.

This sonobuoy had a rotating 11o beam that rotated through 360o every 12 to 20 minutes depending on sea state. Rotation was achieved by a special sea anchor that dropped from the buoy on entering the water. This anchor caused wave action to rotate the buoy through its search pattern. The AN/CRT-4 was introduced too late to have any effect on the war however.

below AN/CRT-1, an earlier version:

Upon water entry, FIDO performed a circular search at a predetermined depth controlled by a bellows and pendulum system. This continued until the potential target's 24 kHz acoustic signal detected by the hydrophones exceeded a predetermined threshold level, at which point control was then shifted to the passive acoustic proportional homing system. Initially the torpedoes were set to search for a target at a depth of 50 feet (15 m), this was later changed to 150 feet (45 m). To prevent the torpedo accidentally attacking surface ships, it resumed its circling search if it rose above a depth of 40 feet (12 m). 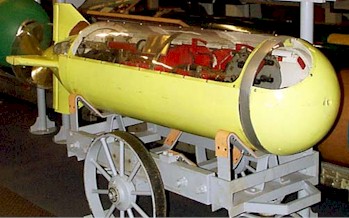