correct jan. 15, I mistyped. That map is perfect, exactly what I was looking for! Thanks.
Top

there might be some more information in "The History of Panzerkorps Großdeutschland, volume III", that series covers the operations of all GD units in great detail.

Good afternoon. I am from Rossi and write on this forum through a translator. On this, I apologize for my English. I am very interested in data on the armor of trains that were on the territory of East Prussia from 1.12.1944 to 30.01.1945. On this forum mention armored trains number 32, 68A, 30.76, 72B. But I have data that at the time of the encirclement of Konigsberg on January 21 the last train that accompanied the armored train 601 left the station for Germany. According to the data, this last train took away the sapper part( maybe the builders of Todt). According to other sources, the train was one and there was a civilian "Koch train"( there is a mention in the memoirs of Von Lash). So was there an armored train with this number on the territory of East Prussia
Top

So total well above 1500 tanks, assault guns and self-propelled guns operational or in repair. Of them 1 HG and Brandenburg divisions were transferred to Poland before being involved in any action, that is 88 AFV on hand plus 21 in transfer. I have only a vague idea if any about identity and location of some smaller units. What were exactly Pz.Jg.Kp 1233 or Stu.G.Abt. 1006(L), for example? Returning to the official Soviet history of WWII: the volume 10 estimated 700 tanks, SP and assault guns with German forces in Prussia. Those numbers became almost canonical but they are a gross underestimate as demonstrated above. Funny considering a common idea that Soviet histories always inflated German numbers.


Pz.Jg.Kp 1233 appears on the map of XXIII Army Corps in January under 23.Inf.Div. however, in the chronicle of this division or documents from the germandocsinrussia website it no longer appears later! 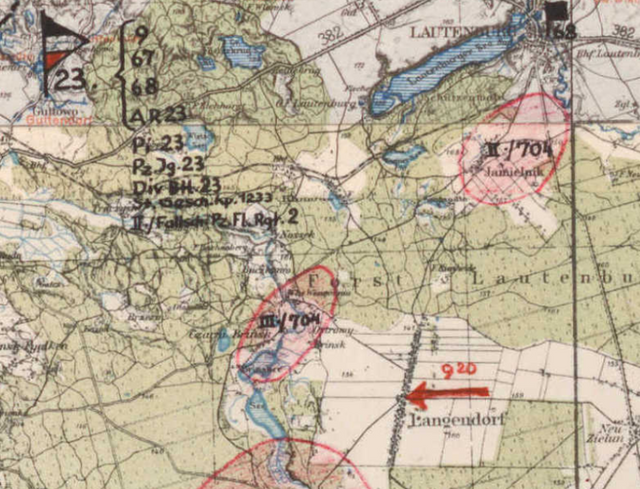 That fills in a gap nicely about where Pz.Jg.Kp. 1233 was deployed/positioned. Can I ask what is the date in January for the map you have posted? Better still would it be possible for you to post a link to the specific map file in question?

Hello.
Yes I will provide when I get home. I have much more information. It is very puzzling why there is no literature describing the warfare in West Prussia (between the line - Elblag - Zalewo - Nidzica to the Vistula border)! The fighting in East Prussia is quite well described. I hope to be the first to publish a paper on this subject.
I am particularly interested in the 23rd Inf. Div. which at that time had a Tiger tank (Pz.VII) and Nashorn tank destroyers at its disposal. I will create a new thread on the forum, I count on help because I have many questions. Greetings
Top

Some more information about Pz.Jg.Kp.1233:

Hi.
2,5 years later and I think it's good time to resolve one intresting thing. What's happened with panzers from 5 panzer-division. In document from 11.01 in 3 PzAOK's Tagesmeldung( Ger.Doc.iRus) we can find that division had 36 panzers (IV.,V.) operational https://wwii.germandocsinrussia.org/de/ ... ect/zoom/4 so why in above posts are info's that 5 Pz Div had operational : 47Pz V + 33 Pz IV. Why is so such discrepancy? In another source for example pritt buttar in battleground in prussia state that 5th panzer had about 65 tanks operationala and another dozens in repairs. What is the source of that info and why in every military forum about II world world is stated that 5pz divison is much stronger than 7pz divison. By the way 36 operational tanks isn't so big amount.
Top

Numbers provided by what member ?
And with your link i can't access to the files a problem

5 Panzer Division suffered a lot during the operation Schneesocke/Winterreise in early January 1945, hence a decline in the tank strength, I guess.
Top

These a numbers for the 5 Panzer Division as of 1/2 January 1945 (From a report on situation with armor-piercing weapons of the 4 Army, NARA T312 R244)
5 PzD.jpg
So total 31 Pz IV, 40 Pz V, 26 assaults guns and tank destroyers operational.
You do not have the required permissions to view the files attached to this post.
Top

For comparison, status of the same division (5 PzD) as of 5/6 January 1945:
0154.jpg
So 11 vehicles were now complete write-offs, and many more (76) were in need of serious repair. That was all a result of a combat which lasted barely longer than 24 hours (from early hours of 4 January until morning of 5 January).
You do not have the required permissions to view the files attached to this post.
Top

Hey . I am interested in the warfare front in Mazury. Specifically in the area of Rastenburg-Barten-Roosel-Bartenstein 1945 January-February. I am collecting material for publication. Probably fought here Belarusian 3Front - 2nd and 31st Guards Army. I'm looking for a map and daily reports, Can anyone help?
Top

PZK HG.JPG
You do not have the required permissions to view the files attached to this post.
Top

May I ask the source for your posted document please.