Discussions on High Command, strategy and the Armed Forces (Wehrmacht) in general.
10 posts • Page 1 of 1

Hey forum! Do anyone here have any good overview of how bad the fuel shortages was between 44´45´, perhaps some statistics?
Thanks!
Top 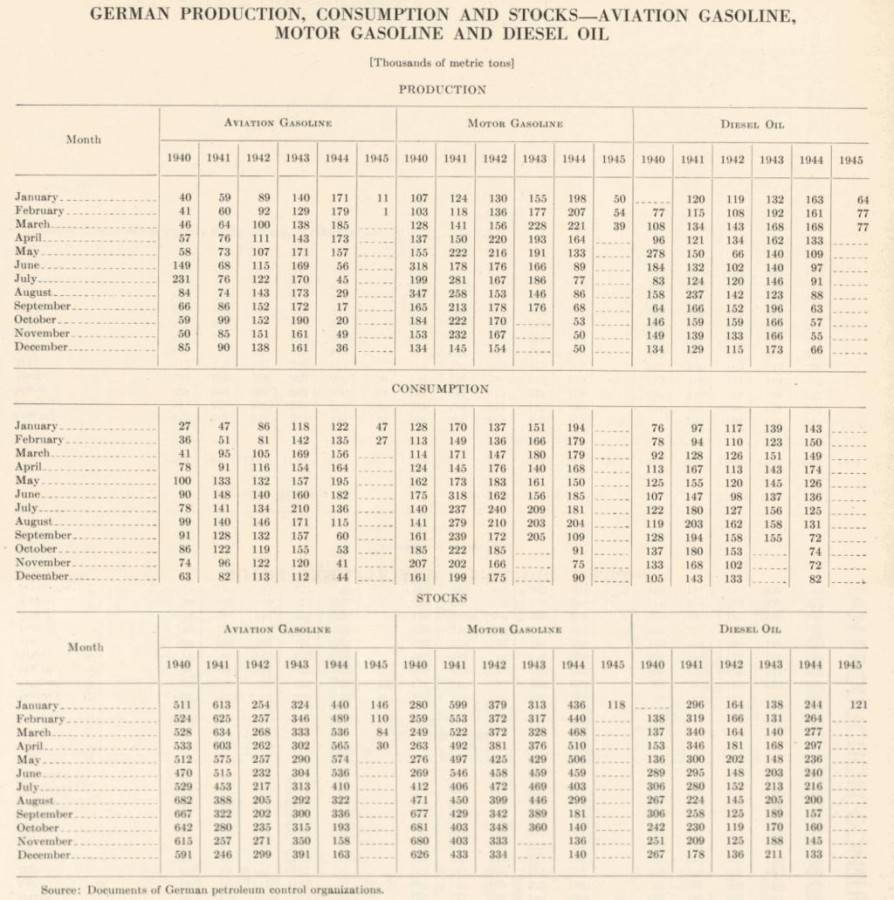 I have never seen an entirely wordless reply packed with such a mass of "to the point" information.

This video is about the German oil/fuel situation generally and not specific to 1944/45 but I thought it was fascinating. Be interested to know what other members think of this!

Who compiled this? Anything else of value in this book ?
Top

As I remember correct, it was complied by US Inteligence after WW2, by data from German documents.
Top

As I remember correct, it was complied by US Inteligence after WW2, by data from German documents.

Is it from a book? Which one?
https://twitter.com/themarcksplan
https://www.reddit.com/r/AxisHistoryForum/
https://medium.com/counterfactualww2
"The whole question of whether we win or lose the war depends on the Russians." - FDR, June 1942
Top

They are the data tables used to produce the figures found in the USSBS Oil Division Final Report and the BBSU report The Strategic Air War Against Germany 1939-1945. Some of the data are also found in those reports as annualized data, but these tables are rarely reproduced in full.
"Is all this pretentious pseudo intellectual citing of sources REALLY necessary? It gets in the way of a good, spirited debate, destroys the cadence." POD, 6 October 2018
Top

Thanks Rich. As so often happens we stumble out of the woods & find ourselves again staring at the USSBS.
Top

Donald L. Miller (Masters Of The Air, 2006, ppg. 313) said: as of the first quarter of 1944, over 50% of the entire German supplies of (synthetic) oil, 85% of high-grade motor fuel and nearly 100% of aviation gasoline came from inside Germany proper, from the synthetic fuel plants located in Ruhr, Silesia and central Germany, near Leipzig.

As we can see in the tables above, the synthetic fuel industry reached an all-time high in March 1944: 185000 tonnes of aviation gasoline (not "aviation fuel" in general, as the jet planes used fuel oils), 221000 tonnes of motor fuel and 168000 tonnes of Diesel fuel. The bombing campaign erased this advantage as early as June 1944.
Top
10 posts • Page 1 of 1