Helicopters during the Algerian war.

Discussions on other historical eras.
5 posts • Page 1 of 1

Helicopters during the Algerian war.

The 1950s, '60s, and '70s were the era of the "limited" war and the "low-intensity conflict." Every hot spot in Middle East, Africa, Asia or South America was suddenly part of the Cold War. This peculiar outlook colored every aspect of late 20th-century strategy and tactics and gave rise to a new understanding of the purpose, design, and use of aircraft and helicopters in combat. France has been the major contributor to these developments, almost by creating new tactics.

Helicopters were first used extensively during the Korean War (1950-1953) but typically in medical evacuation missions and cargo delivery roles. In Indochina (1946-1954) most of the helicopters used by the French army for casualty evacuation were Hiller H-23, Westland WS-51, and Sikorsky H19. The technology of the time did not allow for much more. But by the time war broke out in French North Africa (1954-1962), relatively large, powerful helicopters were available in quantity. Piasecki H-21 "flying banana" and French-built Sikorski H-34 helicopters rapidly displaced fixed-wing aircraft for the transport of paras, legionnaires and commando teams. France made aggressive use of helicopters in Algeria, both as troop transports, developping the new concept of tactical assault landings, and gunships. The helicopter was fast, so guerillas had less chance to fade away into the hills after an attack. They were immune to the ambushes and roadblocks that constantly frustrated road convoys. Even large infantry operations were mounted by heliborne troops.

Bell 47s or Alouette IIs performed reconnaissance and command-and-control duties, while H-19s, H-21s or H-34s transported the troops. Armed helicopters that provided some (helped by planes) or all of the fire support for the operations were usually H-34s called "Pirate" in the Army or "Mammouth" in the Navy. The Navy also used H-21s called "Couleuvrine". The Alouette II and III were also used but usually to fire AS10 and AS11 air-ground missiles.
In 1954/1955, French commanders placed infantry machine gunners in their Bell 47 casualty evacuation helicopters. The ad hoc gunships could outflank guerillas dug in on otherwise inaccessible ridges. But they were clearly not ideal. In 1955/1956, the French Air Force experimented armed H-19s, then being superceded in the transport by the more capable H-21s and H-34s. The H-19 was given a 20mm cannon, rocket launchers fixed to fire ahead, plus a 20mm cannon, two .50 machine guns, and a 7.5-mm light machine gun firing from the cabin windows. While more lightly armed H-19s were used in action (a 20mm cannon, two .50 machine guns), they were still too light and low-powered for the gunship role. Some H-21s were armed with batteries of forward-firing rockets and machine guns and some even had racks for fragmentation bombloads. Most received a door-mounted 20-mm gun and two .50 machineguns. The H-34s proved the best gunships. Standard armament comprised a 20mm cannon (the German MG151), firing from the cabin door, two .50 machineguns firing from the cabin windows to port, and sometimes batteries of 37mm or 68mm rockets. Reloadable, quadruple mountings for 73mm bazookas and additional fixed, forward- firing guns were also tried. The real totally dedicated gunship arrived only years later in Vietnam with the Huey Cobra but in Vietnam the US also used UH-1 Huey and CH-46/CH47 helicopters in that role before the arrival of the Cobra. 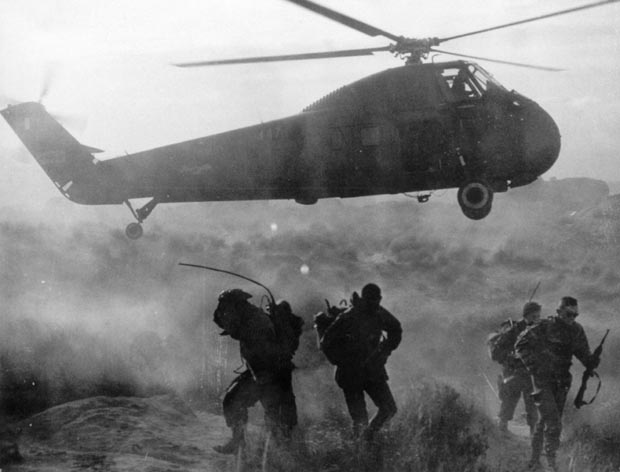 H34 and French légionnaires from the 2e REI 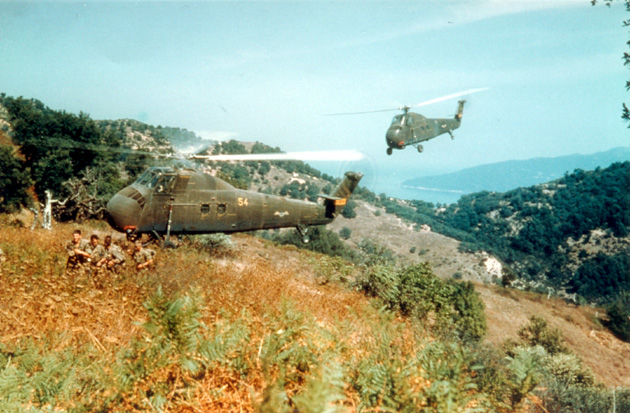 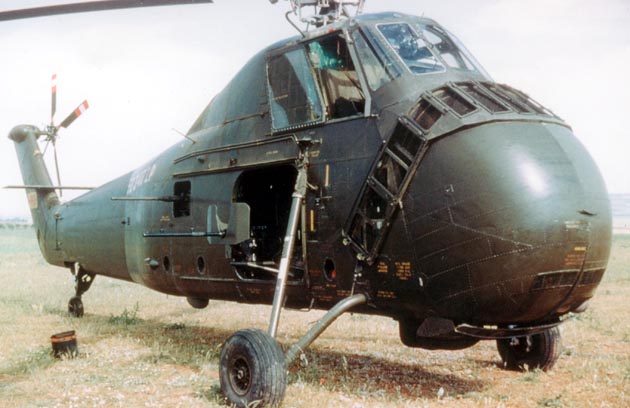 During the Algerian war, the Nord AS.10 and AS.11 wire-guided antitank missiles were used. Aviators quickly recognized the potential value of these weapons in guerilla fighting. The missiles were first used against guerillas who had holed up in heavily fortified mountain caves. Alouette IIs and IIIs could carry four missiles each, the latter often operating in mixed formations with gun-armed Alouette IIIs, which could carry a 20mm MG151 cannon on a mounting in the port cabin door.

Bell 47G and AS10 air-ground missile

The helicopters "gunships often provided the most responsive and effective air support for troops in the field. Heavy, fixed-wing aircraft, such as the B-26s and Skyraiders, were centrally controlled and organized, as corps-level Groupements Aériens Tactiques or GATACs. These organizations were designed for planned, set-piece operations and could not react quickly in a fluid situation. Their bases were often far from the fighting - three GATACs covered the whole country from central bases at Oran, Algiers, and Constantine. The T-6s, SIPAs, and Fennecs were organized into forward air commands and dispersed across the whole country, thus more prone to provide a near-immediate support demanded by troops in contact with the enemy. Since helicopters were often on the scene, with weapons leftover after the landing zone had been cleared, ground commanders began to call on them for general fire support. The results achieved eventually led both the air force and ALAT (Aviation légère de l'Armée de Terre - Army Light Aviation) to regularize this field-expedient. The basic helicopter unit, the Détachment d'Intervention Héliportée (DIH) became, in effect, the organic air force of airborne infantry task force. This distinction between air-force and army air-service roles would later be adopted in its entirety by the United States. The French developped the agressive role of the helicopters and used them massively, in organized structures, for assault and attack for the fisrt time. All the light CAS aircrafts developped the concept of antiguerilla warfare.

Didn't one of very known French Foreign Legion commander died in Algeria, when his helicopter was shot down by the rebels during anti-guerilla operation?
Top

Yes, Lieutenant-Colonel Jeanpierre (callsign : Jacquemard soleil) on 29th May 1958. He was commander of the 1st REP and was leading an operation on board an Alouette. The helicopter has been damaged by the fire of several ambushed MG42 and crashed. The commander was found heavily wounded by the crash and died several minutes after.
Top

Re: Helicopters during the Algerian war.

Very interesting topic indeed. Too bad the French Foreign Legion doesn't have any helicopters for its own use. The Germans in the FFL who use to be pilots in the Luftwaffe during WWII,would loved to fly them if they got a chance. Maybe some of the German Legionnares did.