Discussions on the Holocaust and 20th Century War Crimes. Note that Holocaust denial is not allowed. Hosted by David Thompson.
26 posts

The famus foto of a german soldier aiming at a (polish?) women with a child. Who has made it, is it real or not?
Top

You mean this one (from http://www.auschwitz.dk/holocaust2.htm)? 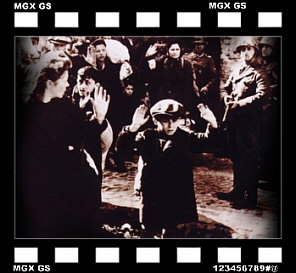 The page linked above says this:


More than any other photos, this famous photograph captures the essence of the horrors of Holocaust: Warsaw 1943, a little Jewish boy, dressed in short trousers and a cap, raises his arms in surrender with lowered eyes, as a Nazi soldier trains his machine gun on him [...]

But after several decades the boy was found - Tsvi C. Nussbaum, a physician living in Rockland County in upstate New York, USA, was the then seven-year old little boy. He told how he and his aunt were arrested in front of a Warsaw hotel, where Jews with foreign passports had gathered to find a way to escape Poland. He remembered the date, July 13, 1943, and how he was told to put his hands up: I remember there was a soldier in front of me, he told the newspaper, recalling the picture, and he ordered me to raise my hands.

Are you referring to this photo?

The photo in reference by Penn44
belonged to the Einsaztgruppen in Russia and Poland.

The first photo was taken in Warsaw Guetto during the uprising. The german soldier was identificated like SS Rottenführer Joseph Blosch, he was judged in the Demokratic Republik of Deutschland and executed after the war by the Guillotine.

Helly Angel wrote: The german soldier was identificated like SS Rottenführer Joseph Blosch, he was judged in the Demokratic Republik of Deutschland and executed after the war by the Guillotine.

Which of the two photos are you referring to?

She was refering to the picture with the guy about to shoot the women and child, the guy was in the Einsaztgruppen and his name was SS Rottenführer Joseph Blosch
Top

Bloesche (Blösche), Josef (1912-?) [SS Corporal] – {identified from Warsaw Ghetto photo of armed guard watching a Jewish child, arms raised, walking with other prisoners (NYT 24 May 1969:2:4); arrested and charged by an East German court at Erfurt with war crimes arising out of mass murders of Jewish civilians by the 8th Action Command (Einsatzkommando 8) and the Warsaw Security Police (Sipo Warschau) in two mass shootings at Baranowicze in Jul-Sept 1941, with additional killings resulting from the forced deportation of Warsaw Jews to the death camps Sept 1941-Jun 1943, and with participating in the liquidation of the Warsaw ghetto; convicted and sentenced to death May 1969 (NYT 6 May 1969:2:3); subsequent fate unknown. (JuNSV Verfahren Lfd.Nr.1049; LG/BG Erfurt 690430; Ob. Gericht der DDR 690613).}

There is apparently no question about Bloesche's identity (he is the last person on the right side of the photograph); some of our posters have questioned whether the little boy is Zvi Nussbaum.
You do not have the required permissions to view the files attached to this post.
Top

Please look with care the photo and read the info:

The SD trooper pictured second from the right, is SS-Rottenfuehrer Josef Bloesche, who was identified by Polish authorities using this photograph. Bloesche was tried for war crimes by a Polish court in 1969, sentenced to death and executed in July of that year.


Penn44: my reference about the Eisaztgruppen is the photo that you posted the link, the man who was shooting at the woman, not the photo in this post.

David: Great post with important info about Bloesche!! Thanks! A friend to Yad Vashem confirmed to me long time ago the execution of Bloesche in 1969, He was ubicated in Germany and deported to Poland to a trial and executed in Poland. He receiev the EKII for the action in Warsaw guetto.

It is the policy here to discourage personal remarks in posts. They are inappropriate, particularly when the target cannot respond. One such post, along with accompanying remarks and two replies, have been deleted by this moderator -- DT
Top

And let me just add that posts such as the ones deleted by David have no place in the research sections of this forum and that the members involved should know better.

Why were Josef Bloesche executed? Didn't he just follow orders? I thought that only the leaders were executed.
Top

F.N. wrote:Why were Josef Bloesche executed? Didn't he just follow orders? I thought that only the leaders were executed.

With all respect, I never answer, questions with a sense of "double intention" but in this case to avoid the manipulation of the informaton, I´m going to do it.

Joseph Blösche before the Warsaw Guetto Uprising, was the Responsible like SS Rottenführer of the wooden bridge between the Guetto and Warsaw.

In this responsability he was well-knew like "Frankenstein" because he likes with his own gun shoot people without motive. He likes shoot the kids who were circa of the wall since the high of the bridge.

To make orders is not discharge in your our responsability, with all respect this is a coward idea. Be responsaible and assume your own responsability.

The picture was taken by Jurgen Stroop as an actual birthday gift voor Hitler.

Take a look at this:


In the November 28, 1960 issue of Life Magazine, a photograph of the "Little Polish Boy" appeared. The photo was taken by Jurgen Stroop as a birthday gift for Adolf Hitler and was published in the Stroop Report Newsletter in 1943. A very poignant poem about this photograph was later written by Peter Fischl, a hidden child of the Holocaust.

F.N. wrote:Why were Josef Bloesche executed? Didn't he just follow orders? I thought that only the leaders were executed.

In May last year, the German public televison (ARD) broadcasted an very interesting documentary, called: "Der SS-Mann". I hope the Norwegian television will buy this documentary, so you can see for yourself why this
"man" was convicted and sentenced to death.

I have found this thread to be a little though provoking.
As I posted earlier today is Holocauts memorial day in Northern Ireland.
The photograph ( both) are well known and the information relating to the people in it both Victim and Perputrator is in many ways profound.
The little boy is an enduring image of the Holocaust , the SS Mann an enduring image of all that is evil in the human race.
Both are bound together in time , for all time a split second in time which represents so much .

The murder of the mother and child.........for me this is a chilling image one of the most penetrating to come from the war....simply because it was so off hand, the indifference and cold blooded killing...done without a thought , the mother her clasping of the child...human , natural , the horror and fear so totally complete.

I would say again that the way this section is run is a lesson for others to follow.

I have seen recently a Forum called "Third Reich .Net" the content of which is largely shameful , its small membership and the complete and utter ignorance of some of the contributors does show that the denial of the process shown in these photographs does exist , but at a very base level...sadly the minds which "challange" and seek " Real History"....well it does make you wonder.
Sorry for the rambling.......and thankyou for a simple direct and informatyive series of posts.
Top
26 posts